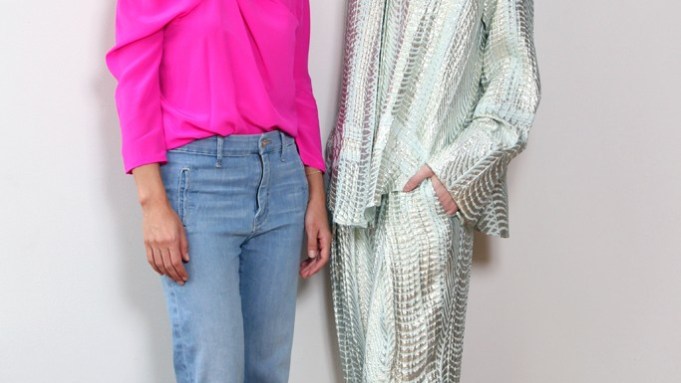 After nearly four years in business, Nellie Partow has decided to put herself on the official fashion week roster. Partow, whose presentation is scheduled for Sept. 10 at The Standard as part of MADE Fashion Week, said she finally felt ready to go from showroom to show space.

“I am still self-financed, and when I first started my collection, it was just a very small capsule of dresses,” Partow said from her Chelsea studio last week. “Now, we have a full collection with every category covered.”

Partow, whose family left Iran during the country’s 1979 Islamic revolution, grew up in Laguna Beach, Calif. She first studied business at San Francisco State University, but shifted to fashion when she moved to the East Coast to attend Parsons The New School for Design. “My mother has a note from me, at eight years old, saying that I wanted to be a designer,” she said. “I always knew I wanted to be in design.”

Post-Parsons, she landed at Calvin Klein Inc., working with Kevin Carrigan on ck Calvin Klein. Partow then moved to John Varvatos to design knitwear before starting her own brand.

While she has a penchant for men’s wear tailoring and knits, Partow wanted to explore a softer side for spring. The lineup is inspired by an early Eighties photo of her mother wearing a black shoulderless knit top. Highlights include a turquoise and metallic silk pajama, a hand-crocheted silk jacket and crisp silk shorts and a cool suit worn with a silk gauze blouse.

Partow sells to five Saks doors, as well several specialty stores, including Jamie in Nashville and Chalk Boutique in Evanston, Ill. For spring, suggested retail prices range from $550 for silk blouses to $3,000 for hand-knit silk jackets.

In recent months, Partow assembled a team of seasoned fashion executives to help grow her business, including independent fashion consultants Jeanine Elias and Jennifer Pinto. Elias was president at Derek Lam and played an instrumental role in the designer’s growth in her 10 years there, and previously spent 12 years at Michael Kors; Pinto, of JPinto Consulting, is an alum of Nanette Lepore, Juicy Couture, Calvin Klein and Gucci America. The two have played a significant role in Partow’s decision to show during fashion week. As she put it, “For me, it was important to have the foundation in place to really be able to showcase the brand.”

When it comes to showcasing one’s talent in a large arena, Partow is no novice. At age 14, before she started designing, she started boxing and became a competitive boxer. Partow even fought in the ring at Madison Square Garden while at Calvin Klein and John Varvatos, winning the prestigious New York Daily News Golden Gloves championship (she broke her nose three times, twice while boxing and once during a tennis game). “Training and preparing for a fight is extremely similar to getting ready for a show,” said Partow. “It takes a great deal of discipline, an incredible amount of commitment. More than anything, they’re both passion-driven and labors of love.”