Theyskens plans to pursue other design projects. His final collection for Theory will be pre-spring 2015. 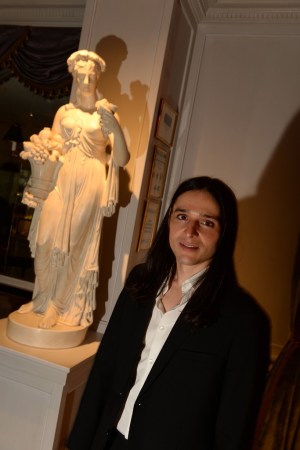 This story first appeared in the June 17, 2014 issue of WWD. Subscribe Today.

The Belgian-born designer joined Theory in 2010 to design a capsule collection under the Theyskens’ Theory label, which he introduced on the runway for fall 2011. The following season he added design responsibility for Theory’s women’s, men’s and accessories collections. After showing Theyskens’ Theory on the runway for several seasons, the line was discontinued last November for pre-fall 2014, and in February, Theyskens presented Theory on the catwalk for fall 2014.

Theyskens, 37, plans to pursue other design projects. His final collection for Theory will be pre-spring 2015.

“I am grateful for Olivier’s extraordinary contribution to Theory over the past three-and-a-half years, and I am particularly excited to see what he does next. While he has already accomplished so much, I am confident in the power of his artistic skill and believe his future will be very bright,” said Andrew Rosen, chief executive officer of Theory.

Theyskens said, “It has been an amazing opportunity to work with Andrew and to benefit from his knowledge in this dynamic segment of fashion. I will always cherish our friendship.”

Asked to elaborate on Theyskens’ tenure, Rosen told WWD, “Everything has a life cycle. Olivier has done great work at Theory, and I believe his appointment at the company and his creativity within the studio enhanced the brand and added a new dimension and new possibilities to the market segment. With Olivier we saw that elevated design has a place in the contemporary universe.”

Rosen said that following Theyskens’ departure, “the Theory studio will be led by the existing internal design teams, who have years of solid experience and exceptional talent.

“Our creative strategy is unwavering in its focus on delivering the best product and the best experience to our client, and is something we will elaborate in the very near future,” said Rosen. “For now, Olivier is going to move onto the next adventure; I am excited for him and eager to see what he does next with his extraordinary vision.”

Prior to relocating here to join Theory, Theyskens was artistic director for Nina Ricci for two years until March 2009 and earlier was creative director of Rochas for four years, before which he designed his own namesake collection. Although he is considered one of the most critically acclaimed designers of his generation, commercial success eluded him at both Ricci and Rochas.

When Rosen tapped Theyskens in 2010, they were viewed as an odd couple: Theyskens, a designer of lavishly sculpted evening gowns, and Rosen, a third-generation New York apparel executive who ran U.S. operations for Theory and Helmut Lang. Their collaboration set the fashion world abuzz with excitement and was viewed as a vehicle to elevate Theory’s clean, tailored aesthetic and add design excitement to a major contemporary sportswear house.

The collaboration succeeded in bringing a higher level of recognition to Theory on a global scale, and the company was able to open more high-end specialty stores around the world, said sources. The Theyskens’ Theory collaboration was designed to have limited distribution, but failed to ignite sales on the store floor. Sources said the collection, which used more luxe fabrics and was priced higher than Theory, was deemed too advanced for the Theory customer and, although it garnered editorial credits in magazines, never really built momentum after the initial launch. Also, execution proved to be a little difficult as Theyskens wasn’t used to working on a calendar required for production of a large contemporary sportswear line.

During the past several years, Theyskens traveled both domestically and internationally on behalf of the brand and became involved in the art world in the U.S., serving as an honorary cochair for the annual Whitney Art Party in Manhattan. Last year, he visited Los Angeles to raise Theory’s profile, speaking at the Los Angeles County Museum of Art’s Costume Council, and attending events at the Theory stores on Melrose Avenue and in Beverly Hills. “So much has evolved. I am looking to make the brand more visible and to elevate the brand and the whole market, so we have a lot more to do. I know we can bring more to it and transform it continually,” Theyskens told WWD.

Known for precise tailoring, street moodiness and designs for cool girls, Theyskens’ Theory was lauded by fashion critics. For his debut collection for fall 2011, WWD wrote: “His collection for Theory, inspired by a play on the raw and rustic, delivered on so many counts — emotion, a cool factor and terrific clothes. The familiar chorus of Gothic gestures and long, lean silhouettes that followed him from Rochas to Nina Ricci is still there — as is his penchant for statement shoes. But this vibe skews decidedly street-chic, not to mention commercial, which used to be the greatest knock against him.” Later Theyskens’ Theory collections were praised for striking the right balance between “a cool, rock ’n’ roll vibe and an elegant refinement” and a “casual cool-girl blend.” For fall 2013, WWD wrote, “If at times the lineup had the feel of elevated basics — a major talent like Theyskens can do more — there were still lots of great wardrobe pieces for the contemporary customer.”

When he showed Theory on the runway for fall 2014, WWD wrote, “The lyrical side Theyskens mentioned was revealed in shiny jackets — silk bonded to wool — beautifully embroidered with green and silver florals. The lineup could have used more of such showpieces, but pushing Theory’s brand parameters is a delicate situation, as Theyskens knows.”

During a Q&A in 2012 with Ken Downing, senior vice president and fashion director of Neiman Marcus, Theyskens gave his take on designing for a contemporary brand, versus couture.

“With couture you feel obligated to design something modern each season but with Theyskens’ Theory I don’t question anything. I’m thinking of what I’d like to wear,” said Theyskens.

Theyskens catapulted to fame at 21 years old when Madonna wore his black satin hook-and-eye gown to the Oscars in 1998. He put his signature brand on hiatus when he joined Rochas in 2003. His role there, marked by critical acclaim, ended when owner Procter & Gamble Co. closed the money-losing fashion house to focus on fragrance. Theyskens’ final runway collection for Ricci — shown on a sandpaperlike runway with models perched on stiltlike shoes — was viewed as a creative kiss-off to Ricci management and a defiant statement of his Goth leanings versus the romantic and ethereal image of the Ricci brand.

Theory was founded in 1997 by Rosen and Elie Tahari. The brand rapidly attracted a loyal following for its chic, understated basics and its stretch pants. In 2003, the duo sold large stakes in the brand to two Japanese companies — Link International, Theory’s Japanese licensee founded by Ricky Sasaki, and Fast Retailing Co. Ltd. Tahari sold his entire stake, while Rosen held on to 11 percent, going on to become ceo of Theory and, later, Helmut Lang, which Link Theory Holdings Co. Ltd. bought in 2006. In 2009, Link Theory Holdings became a subsidiary of Fast Retailing of Japan.