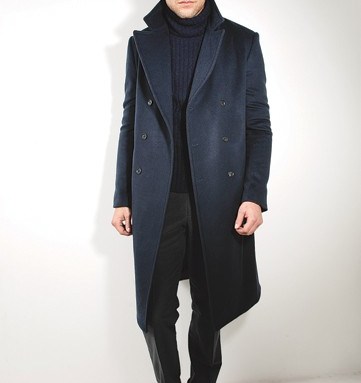 Ashley and Mary-Kate Olsen are launching men’s wear under their label The Row — a fitting development, perhaps, for a collection named after Savile Row that frequently takes inspiration from the fabrics and tailoring traditions of men’s wear.

The stealthy global expansion of The Row has surprised the fashion world with its subtle chic and avoidance of the typical celebrity-designer business. The Olsens have kept relatively quiet about their attachment to the line, leaving its promotion largely to sales reps and word of mouth. They hope such discretion will work in their favor now as they attempt to win over men who might not relate to the former child stars as readily as women do.

“We thought it would be a problem for the women, too, knowing that we were behind it, because it’s definitely for an older customer than us,” said Ashley Olsen, 22. “But a lot of customers didn’t know it was us, and a lot of them still don’t know. That’s really interesting, and something I hold close, because I prefer to be behind the scenes and because I really believe the product can speak for itself. And I also have to say, men do want a woman’s approval.”

Men frequently give them compliments about the women’s line, especially about the way it feels, she said. Therefore, many of the same fabrics were used in both collections. Nearly all the fabrics have a cashmere component for texture, and all come from Europe. But the Olsens are committed to making the garments in the U.S.

“That’s our thing — an American brand made in America. When we looked in the men’s market, we couldn’t really find basics you could wear with designer — the same concept as our women’s. So we started the process with pants and blazers, because we knew it would take time to get that right,” said Ashley.

“We’ve been altering clothes since we were six years old,” said Mary-Kate Olsen. “To train your eye for that long is a big help.”

They observed what men’s designers, including Lanvin and Tom Ford, were doing well, and they considered well-dressed men throughout history, from Cary Grant to Brad Pitt. The men’s wear reflects what its creators find attractive in men, they said.

“It’s definitely an older, masculine man,” Ashley said of the type of man they admire and find inspiring.

“Design always has to come from what you like,” added Mary-Kate.

Retail prices for the 35 men’s pieces range from $230 for a two-ply T-shirt to $3,200 for a cashmere overcoat. Patterns include herringbone and plaid, and the palette is all neutral. Tailored pieces feature soft construction. Trousers come in two fits, but both are relaxed. Sweaters are perhaps the most distinctive items, especially one style with a cowled shawl collar.

The tag in each garment is a blackened version of the gold chain in their women’s wear.

As for marketing, the Olsens want to wait and get feedback from retailers. The Row for women is sold worldwide in 60 stores, including Barneys New York and Bergdorf Goodman. The strategy for men’s is to target those retailers that have a men’s component.

“It’s going to take a relatively educated man to understand the collection — and appreciate the fabric and the quality and the fact that it’s made in the U.S. We do a lot of sales clinics and some trunk shows. The best thing about The Row is when you put it on, you’re sold. That doesn’t translate in a runway show, or anywhere but in a store where you’re trying it on and you have great service talking to you about it,” said Ashley.

Both Olsens are fully involved in The Row and Elizabeth & James, a contemporary label that also encompasses shoes and jewelry. They co-own both companies, as well as Dualstar Entertainment Group, which distributed their films and created extensive mass-market licenses — an estimated $1 billion worth of merchandise — when they were minors. The Olsens took control of Dualstar when they turned 18.

“That was for us to figure out what we wanted to do and also to not be locked into anyone else’s vision for our future,” said Ashley. Upon moving east to attend New York University, the sisters became icons of boho chic, and Ashley dove into the fashion industry. Her quest to create a perfect T-shirt planted the seed for The Row, which launched for spring 2007 with a dozen knit pieces. It now is supported by a staff of eight.

“This is my industry now. I don’t act anymore, I’ve put all that on hold. I really believe in this, and I believe there’s a void in the marketplace for an American, high-end, beautiful line of great quality,” she said.

Mary-Kate is mainly occupied with fashion, too, but still acts. In addition, the pair coauthored a coffee-table book called “Influence” last year. Juggling activities and shouldering responsibility are disciplines ingrained in their childhoods, they said.

“Ashley’s here every day, working on The Row. I concentrate on this because we own the company together, but I also balance everything else on a daily basis, whether it’s Elizabeth & James or footwear. We’re controlling people when it comes to our business, and that’s probably a good thing,” said Mary-Kate.

They would like to open a store for The Row, but are probably years from doing so, and in time they plan to move into more categories.

“I’d love to get into china,” Ashley said. “But leather goods will probably be the next step. And now that we have men’s, we’ll embrace this person, figure out what makes sense for him and then we’ll roll that out to different categories,” she said.

“We don’t ever want to just offer something and hope for the best,” said Mary-Kate. “This is a slow and steady process” of learning and strategizing.

The pair have not followed the beaten path for emerging designers in New York, neither rushing to have a show, courting press, nor applying for awards. After all, they don’t need additional funding, and press follows them relentlessly. But they do seek advice from designer friends including Christian Louboutin, Diane von Furstenberg and Robert Lee Morris, who has a jewelry collaboration with Elizabeth & James.

One thing they clearly will not compromise is their self-determination.

“We did everything when we were younger, and it wasn’t always by choice,” said Mary-Kate. “By the time we got to college, we wanted to figure out what we loved doing. Ashley just wanted to make a T-shirt at the beginning. It was our chance to start something. This was something to prove to ourselves, really just ourselves.”