On With the Shows

Los Angeles Fashion Week, which begins Friday, will offer a little bit of everything, from designers who are focusing on the needs of working women to those...

By Marcy Medina and Rachel Brown on March 5, 2008
View Slideshow 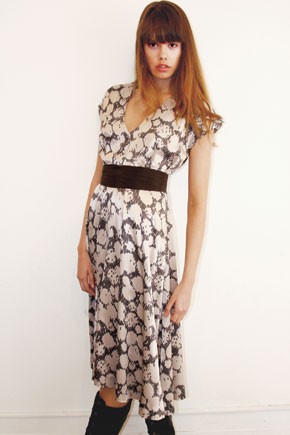 Los Angeles Fashion Week, which begins Friday, will offer a little bit of everything, from designers who are focusing on the needs of working women to those who are more adventurous.

When Braxton and Turya Nations packed up their car in Nashville and headed West with $3,000 in March 2003, they never thought they would be selling a clothing line in boutiques such as Opening Ceremony, Curve and Louis Boston. But many ramen noodles and peanut butter-and-jelly sandwiches later, the married couple is producing the Guy Baxter line in their Los Angeles garment district studio. They will present the third Guy Baxter collection at the Addison + Crescent showroom on March 12.

Turya, a Teaneck, N.J., native, and Braxton, from St. Louis, met in a music class at Nashville Technical College. While Braxton pursued a career in music production, Turya began designing clothes and styling for musicians. Turya, who is fond of watching old movies without the sound, was inspired by the look of Konstantin Stanislavsky’s Moscow theater circa 1890. The collection is primarily black and charcoal gray, with one timeless print and a shot of electric blue.

“I thought, how would a modern-day person in that art scene adapt that look? I liked the oversize jacket and high-waisted pants with antique hardware,” said Turya, who crafted the pants without side seams, just a pintuck in the front. The rest of the line is similarly detailed: A wool yoked gown has beaded velvet trim and ties, and a silk dress has a high-waisted sash inspired by a photo of a French madame. Several pieces, such as men’s wear-inspired vests, wide-legged pants and ruffled blouses, carry through each collection, including the spring 2009 collection Turya already has started working on. Wholesale price points range from $82 for a sleeveless top to $295 for a long trenchcoat. “Compared to a 9-to-5 job, this is fun,” she said.

Eric Niccole, who was raised in Huntington Beach, Calif., and lives in Los Angeles’ historic West Adams neighborhood, is steeped in Southern California style — and it doesn’t always meet his standards. “It often gets stuck in ruts,” he said. “I’d like to evolve it.”

Niccole, 31, started the men’s wear label Orthodox in 2005 and now he’s launching a line for women that attempts to translate masculinity for the female customer. “There is a lot of girlishness in the market, and there was a void for balance between a feminine and more androgynous, boyish look,” he said.

A jacket that fades from black to charcoal is a Niccole favorite. Other notable pieces include high-waisted trousers and a dress with a geometric Franz Kline-inspired print. “I definitely try to push the envelope, but in such a way that is not offensive to buyers and the end consumer,” Niccole said. Wholesale price points for Orthodox’s women’s line, showing Sunday at Smashbox Studios, range from $42 to $250, and Henri Bendel and Rolo in San Francisco have picked it up. But Niccole, who dabbles in the music and restaurant businesses, as well, isn’t stopping with clothing. “My dream would be to further brand Orthodox and allow it to affect culture through different mediums,” he said. Of course, Niccole assures, fashion would be the cornerstone.

Jesse Kamm’s take on modern life? It’s a jungle out there. Kamm will present her sixth collection, “Into the Bush,” in a Gen Art installation on Friday.

“Technology is moving so fast, I feel as though we’re all on the brink of adventure,” she said. The designer was inspired by “Crocodile Dundee” actress Linda Kozlowski, who wore loose, high-waisted khakis, oversize jackets and scarves in the 1986 Australian outback caper, as well as Yves Saint Laurent safari icons Veruschka and Lauren Hutton. “I imagined these sophisticated ladies going to places of exploration.”

The 15-piece collection includes odes to the safari dress and a flight suit as well as Kamm’s signature tunics and halter dresses. As she does each season, Kamm creates artwork that she screen-prints onto cotton and linen. This time she was inspired by nature: bird tracks, tortoiseshells and tree rings. “My theory is that everyone leaves behind a mark, and this is my mark,” she said.

Wholesale prices range from $110 for tops to $500 for long dresses. Kamm, 32, began designing when she quit modeling three years ago, took a sewing class and started making herself clothes. She attracted her first customers while wearing her designs in Ron Herman. Los Angeles fashion maven Liz Goldwyn then wore a piece into the Paris boutique Colette, which later placed an order. Kamm’s stores now include Restir in Tokyo; Vakko in Turkey; Madison and Presse in Los Angeles; A’maree’s in Newport Beach, Calif.; Blake in Chicago, and Finn in Toronto. Kamm, a one-woman show, produces 100-piece runs of her screen-printed pieces and more of the solids, explaining: “I’m taken by detailed, handcrafted work that is not mass produced.”

The moment Alan Del Rosario, then 27, stepped into Los Angeles’ Fashion Institute of Design & Merchandising, he knew he had made the right decision to trade a career in civil engineering for one in fashion. It took Del Rosario, now 42, a bit longer to figure out how to run a business. His namesake line teetered in the post-9/11 economy, and he makes his signature eveningwear mostly for private clients. “Talent is not everything,” Del Rosario said. “It is not about all flash and no results. It has to have results.”

With Bow & Arrow, Del Rosario has a new backer, financier Henry Kim, and a new target customer: the contemporary clothes shopper. Citing Mary Tyler Moore and Lois Lane, Del Rosario said his muses are working women who manage to stay feminine and excel in the male-oriented corporate world. A-line dresses and cocoon jackets are key items in Bow & Arrow’s fall collection. Wool and silk blends are prominent fabrics, and black, cream, camel, red, fuchsia and flashes of metallic dominate the color palette. Wholesale prices run from $38 to $170, and the early results are promising. Bow & Arrow, showing Tuesday at Smashbox Studios, is being sold at Anthropologie, Macy’s, Bloomingdale’s and Fred Segal.

A sculptor by training, Trang Chau finds inspiration in art, architecture and movies. Her clothing line, le sang des betes, or “blood of the beasts,” in English, is named for French filmmaker Georges Franju’s 1949 documentary filmed in a slaughterhouse. “It has a dichotomy of darkness and beauty — all my clothes have that aesthetic,” said Chau, 29, who grew up in Southern California after immigrating to the U.S. from Vietnam at age 2. “They are feminine, but have strong edges.” More direct influences on her fall collection of 18 looks are Gothic cathedrals and midcentury design. The suspenders on one jumper, for instance, draw upon shapes seen in Gothic facades and Jean Prouvé chairs.

Emphasizing lines and curves, Chau’s clothes are highly conceptual, though she’s taken pains to make them wearable. For fall, her fabric selection is limited to cotton and wool, and her colors to black, white, gray and cobalt. “Whites and blacks are the most versatile,” she said. “You can wear them all year round.”

Still, Chau admitted that creativity, not business, is her strong suit. A couture line she helmed with a partner closed in 2005. “Making money doing couture was impossible,” Chau said. But she believes the ready-to-wear market is open to daring styles. “You always see the same thing over and over again, and people want to see something new and interesting,” she said.

Chau is aiming to sell le sang des betes, which wholesales from $45 to $250, to high-end boutiques. The line is showing at Smashbox Studios on Friday.