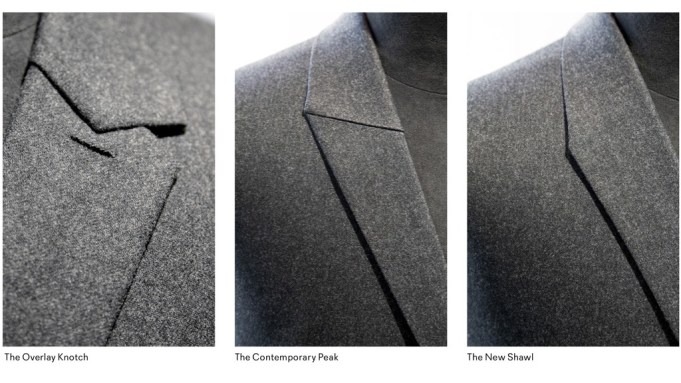 New and noteworthy brands from the fall market.

This week, Kilgour is hitting the London Collections: Men schedule for the first time since creative director Carlo Brandelli returned to the Savile Row tailor for spring 2014. Brandelli will hold a fall presentation on Sunday, and he noted that the collection “focuses on our continued development of contemporary ideas,” with the lineup showcasing a series of new collar and lapel designs. Brandelli previously served as creative director at Kilgour from 2003 through 2009. He returned after No. 14 Savile Row, which is owned by Fung Capital, acquired Kilgour in 2013. And since Brandelli made his way back to the house, he’s set about refining its tailoring silhouette, with details such as removing buttons on jacket cuffs and placing vertical incisions — rather than breast pockets — on jackets. Last summer, Brandelli, who also works as a sculptor, oversaw the launch of a new 1,500-square-foot Kilgour flagship at 5 Savile Row, decked out in stone, steel and granite.

Alex Mattsson, a 30-year-old graduate of the master’s program in men’s wear at London’s Royal College of Art, draws inspiration from everything from science fiction and technology to motorcycles and spirituality for his designs. “I’ve always liked to make things with my hands…and I always had an eccentric dress sense,” said Mattsson, who was born in Gothenburg, Sweden, and raised in Oslo. The designer’s trademark garments include printed T-shirts, dungarees and biker jackets, all with a tough, streetwear edge. But as a foil to the masculine silhouettes, rainbows frequently crop up as a motif in Mattsson’s work. “I love all the colors together rather than separate,” he explained. His collection is stocked in shops including Machine-A in London, GR8 and Candy in Tokyo, Wildstyle in Los Angeles and Addicted Seoul in Korea. For his upcoming fall collection, which he’ll present Sunday, Mattsson said he has riffed on classic workwear and sportswear silhouettes, done in “interesting textures broken up by modular pockets and details.”

Nigel Cabourn, the British designer who often takes his sartorial cues from his vast collection of vintage military and workwear garments, has been designing for more than 40 years, but will hold his first presentation as part of London Collections: Men on Saturday. The designer, who is based in Newcastle, describes his customer as “a guy who wants to look cool without branding and brash fashion clothing. He’s a guy with integrity.” He added that he aims for his work to combine “style and functionality.” His line is carried at his Army Gym stores in London and Japan, shops-in-shop at Isetan and Matsuya, and online. For Cabourn’s fall collection, inspired by the 60th anniversary of explorer Edmund Hillary’s Antarctic crossing, expect British-made outerwear garments such as military parkas, along with wool and tweed suits, and “classic Harris tweed blazers,” Cabourn said. To showcase the collection, Cabourn will hold a static presentation at his Army Gym store on Covent Garden’s Henrietta Street from Friday through Monday.

Nottingham, England-based Universal Works was founded by David Keyte in 2008. Known for its workwear-inspired silhouettes, the brand will hold a presentation Friday. In the past, Keyte has worked for Paul Smith and Maharishi (following stints as a sign-writer and coal miner in his youth). He said the label aims to turn out designs that are “stylish in an understated, yet confident way; a collection that’s about great shapes, great utility and great design, but never about overdesign.” Key looks in the collection include rugged faux-shearling collared jackets, twill pants and knits made in England. The line counts Beams in Tokyo, Asos and Goodhood in London among its customers. As for the fall collection, Keyte was mum on his inspirations, other than the tongue-in-cheek disclosure that he’s been thinking about “tinfoil bondage suits.”

Danish label Soulland is decamping to London to present its collection at London Collections: Men for the first time Saturday. Silas Adler, creative director of the brand, started out making T-shirts when he dropped out of high school to skateboard. But after skateboarding left the designer “with a broken knee and a broken heart,” Adler decided to develop the T-shirts into a full-fledged collection, which launched in 2002. Now, Soulland’s lineup — which includes graphic Ts, knitwear, chinos and bomber jackets — is sold at stores such as Colette in Paris, Goodhood in London, Odin in New York and Magasin in Copenhagen, along with its own stores in Copenhagen and Bangkok. Adler, who runs the label with chief executive officer Jacob Kampp Berliner, said he likes to mix “past, present and future” in his designs. “Us Danes love irony, so there is also a hint of irony in the designs quite often,” Adler noted. For the fall collection, Adler said he’s taken the approach of designing “one piece at a time. That gives you silhouettes [that go in] in many different directions,” Adler said. “I like…that the collection [gives the idea of a] messy closet.” While Adler said the design process is new for him, he admits it’s “more fun and shows if you’re a good designer or not. I hope I am.” Soulland’s presentation will take place Saturday at London’s Victoria House.

Private White V.C. makes its debut on the London Collections: Men schedule for fall, on the heels of having opened a third British store on Mayfair’s Duke Street in October. Nick Ashley (the son of Laura Ashley) is the brand’s creative director and describes the label’s clothes as “very soft spoken, but the closer you get to them, the more they say about you, right down to the construction of the cloth that we engineer and weave ourselves,” he said. The designs are all crafted in Private White’s factory in Manchester, using largely locally sourced materials. The designs tend toward the rugged, with Harris tweed bomber jackets and heavy knit cardigans among the signature looks. Retailers include Mr Porter, J. Crew, Harrods and Beams in Tokyo. The label is run by managing director James Eden, whose family took over the factory in 1997, before Eden launched the Private White V.C. label in 2011. The factory, which also makes private label outerwear under the name Cooper & Stollbrand, was once owned by his great-grandfather Jack White, who rose from apprentice to owner after World War I. White was awarded a Victoria Cross for his service in the war, hence the label’s name. For fall, Ashley said the collection is based on “a very established principle of British outward appearance that when a gentleman enters a room, you should notice the man before his clothes.” The collection will also take its cues from military clothes and “classic British outfitting,” Ashley said, all worked in a palette of “vegetable-dyed autumnal tones.”