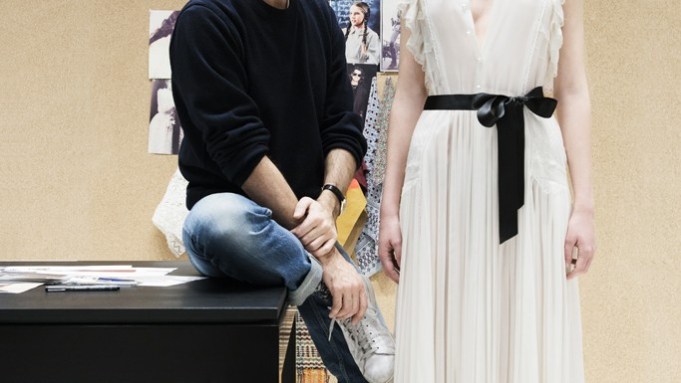 Lorenzo Serafini is gearing up to make his runway debut with Philosophy on Feb. 27 at Milan’s Palazzo delle Stelline.

“My goal is to inject a glamorous touch into Philosophy’s very feminine and romantic DNA,” said Serafini during a preview in his studio at the Milanese headquarters of Aeffe, the brand’s parent.

Serafini was appointed creative director in October and succeeded Natalie Ratabesi following Alberta Ferretti’s decision in 2012 to delegate the entire direction of Philosophy to another designer, differentiating it from her signature collection. Serafini cut his teeth at Roberto Cavalli before joining Dolce & Gabbana, where most recently he held the post of lead women’s wear designer.

Characterizing the collection he will present during Milan Fashion Week as “not seasonal, but aimed at identifying a new style, a new course,” the designer said he tried to create a complete wardrobe, where femininity and comfort play a key role.

Revolving around the idea of “glamorous innocence,” the collection is focused on fluid silhouettes worked in lightweight fabrics, “allowing women to live into the clothes,” Serafini said.

Serafini also developed a range of high-waisted skirts; stretch wool or printed cotton pants with sharp silhouettes, as well as a wide offering of knitted pieces, embellished with ruches, frills and cable stitches.

Philosophy collections are sold in multibrand stores worldwide, including Barneys New York in the U.S., Harvey Nichols in London, Bosco di Ciliegi in Moscow and Hankyu in Osaka.

“I would love Ports 1961 to become the go-to brand for a certain item — the white shirt, for example. We need to establish the core products first and then we can build around that,” said Natasa Cagalj, talking about her goals as creative director of women’s wear under the Ports 1961 label.

Tapped last December to succeed Fiona Cibani, London-based Cagalj was previously Alber Elbaz’s assistant designer at Lanvin and then was at the helm of Stella McCartney’s design team until 2012.

“When I started at Ports 1961, I explored the history of the company and how it all started. I was inspired by the simple vision of its founder [Luke Tanabe], who wanted to create a perfect white shirt for his wife in 1961,” she explained. “This became my starting point. We started to play around with that idea, and we began to build a wardrobe around the white shirt — something accessible, easy and that can be worn by anyone.”

Aiming to deliver elegant yet functional pieces for “the new Ports 1961 woman,” Cagalj said she worked closely with Italian mills and factories, honing the fit to make a complete wardrobe of items, including coats, jackets and trousers, using high-end fabrics. In addition, some special pieces, like tops and dresses, are handmade in the designer’s studio in London.

“I feel like I have the creative freedom of when I first started at college but with experience and knowledge gained from working within the industry,” Cagalj said. “Rather than hide them, I would like to capture all the mistakes that happen in the process and not polish it too much. Incorporating imperfection, but still keeping an element of luxury.”

According to the designer, the new collection, which will be unveiled during a presentation at the Ports 1961 showroom on Milan’s central Via Amedei, will feature pieces that look simple at first, but reveal surprising elements and embellishments upon closer inspection.

For example, a clean white shirt wraps the body and fastens at the back; tailored pieces show jacquard inserts, and bias-cut dresses feature a combination of fil coupé fabrics.

Mario Dice never attended a fashion school, but at age 14 he was already sending sketches to fashion houses asking for a job. Trussardi was among the recipients recognizing talent in his work, and the effort would pay off in later years.

But before finding his way in the Italian fashion industry, 26 years ago Dice moved to New York, where he worked as a freelancer with Kevin Carrigan at CK Calvin Klein and with Donna Karan at DKNY.

After what he called “a very commercial experience, focused on sales and merchandising,” in 2000, Dice went back to Italy, where he joined Sorelle Fontana as a couture designer. Then he spent three years at Gattinoni, prior to being tapped by Trussardi, where he worked for seven years on the main line, as well as on the Tru Trussardi and Trussardi Jeans ranges.

Although six years ago Dice decided to launch his namesake line, he continues to design for other labels, including Zuhair Murad, David Koma and Mugler.

“This season, we decided to do a real launch,” said Dice, who will unveil his women’s fall collection with a runway show on March 1.

The designer, who has a taste for sensual silhouettes and lightweight fabrics, was inspired by the geometric yet feminine shapes of Claude Montana’s spring 1991 show, as well as by the Manhattan skyline. He evokes the skyline in the graphic black-and-white patterns appearing on a range of pieces, including a body-conscious jersey maxidress with a deep V-neck and a sexy front slit. Other evening designs, most of them with the focus on the waist, include maxi frocks with 3-D tulle and lace intarsia, or embellishments with ponyskin flocked on chiffon.

Jackets and coats mix cashmere and leather with laser-cut details, and subtly squared shoulders. The collection is done primarily in a white and black palette, sometimes combined with a graphic approach, shot with pops of red.

“Hyper-feminine, colorful, sensual.” This is how Paula Cademartori described her first footwear range to be unveiled with a presentation on Feb. 27 at the brand’s Milan headquarters.

The Brazilian designer, who made a name for herself in the fashion industry with her luxurious, colorful, eye-catching bags launched in 2010, created a capsule of six styles developed in different color combinations.

“I originally moved to Italy to design shoes — this is a new challenge” she said. “I’m starting with a capsule collection, but the goal is to develop a whole line and transform the Paula Cademartori label into a complete accessories brand.”

Reflecting the same high-quality materials and craftsmanship of the bags, Cademartori’s shoes are manufactured in workshops located in Italy’s Riviera del Brenta footwear district. They will retail between $685 and $799.

“These are fashionable shoes, targeting confident women who look at accessories to express their own style,” said the designer.

For the initial season, Cademartori focused on high heels. The range includes a sexy lace-up boot with cutout details; a pump decorated with intarsia stars on the heel, as well as a sandal realized in a range of materials, including suede in bright tones, lizard, glossy calfskin and patent leather.

The shoe range will be presented next to the designer’s latest bags, which are sold in 170 high-end stores around the world, including 10 Corso Como in Milan; Selfridges and Harvey Nichols in London, as well as Bloomingdale’s in Boston and Opening Ceremony in New York and Los Angeles. Paula Cademartori bags are also available online at Net-a-porter and Moda Operandi.

Vivetta Ponti, who launched her namesake label in 2008, turned to Marianne Faithfull circa 1978 for inspiration for fall. Vivetta is the latest designer to show as a guest at Giorgio Armani’s theater, unveiling her collection on Feb. 28.

The designer said she translated the main inspiration into a range of elements. They include colorful patterns with an oriental psychedelic taste, as well as feminine silhouettes of Faithfull’s profile.

For example, these elements are mixed on a cotton poplin top matched with a Neoprene coat and cropped cotton pants worked in the same multicolored print. This is also embroidered on the sleeves and front of Ponti’s signature cotton shirts.

In keeping with her feminine approach, Ponti delivered flared skirts and jackets with faux fur collars in striped wool bonded with a technical fabric, along with monochromatic dresses in stretch double crepe, embellished with macramé collars.

Knitwear also plays a key role in the lineup, ranging from sportier looks with striped patterns to evening pieces, including sweaters embroidered with images of Buddha sculptures, tigers and elephants.

The apparel collection, positioned in the contemporary segment, retails from about $114 for cotton collars to $297 for embroidered shirts, while knitwear is between $570 and $685. Dresses are about $340 to $1,700.

The label is sold in about 85 stores around the world, including Colette in Paris; 10 Corso Como in Milan, Shanghai and Beijing; Antonia in Milan; Nordstrom in the U.S., and online at Moda Operandi and Net-a-porter.