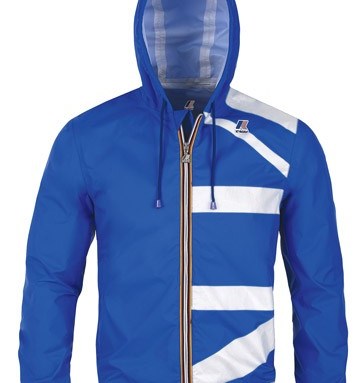 After a five-season hiatus, K-Way, known for its colorful and foldable nylon jackets, will return to the market this June.

Founded in Paris by apparel retailer Léon-Claude Duhamel in 1965 and acquired by the Turin-based BasicNet group in 2004, the company has revisited its core model and broadened its offerings to include daywear, beachwear and accessories.

K-Way’s waterproof jacket remains the anchor of the new collection, but it has been updated with new shapes and graphics. For example, the Jacques and Lily models, two staples of the line, are now available in slim fits. The first is reversible and features a crispy and smooth hand (about $205), while the second bears reflective flag-inspired prints that change shade according to the light (about $234).

Besides the K-Way collection, the company’s stand at the Padiglione Cavanaglia at Pitti Uomo will pay tribute to the history of the brand and to all those cult objects, such as the Polaroid, the Walkman or the iPod, whose names can be found in dictionaries.

A finalist on the latest edition of the Who’s On Next talent competition, Andrea Pompilio will unveil his first solo effort at Pitti Uomo.

Before branching out on his own, the Milan-based designer worked for a string of international brands, including Alessandro Dell’Acqua, Prada, Calvin Klein, Yves Saint Laurent and Bally. “I learned a lot from all the designers I worked with,” said the 37-year-old Pompilio, citing the “conceptual creativity and the attention to color from Miuccia Prada, the importance of marketing and merchandising at Calvin Klein and a taste of Parisian opulence with Stefano Pilati.”

The contemporary and wearable spring collection channels his professional and personal experiences, especially the many trips around the world. He stressed that the lineup also reflects his own summer wardrobe because “when I design, I always keep my private world as point of reference.”

The bright, vivid hues are unconventionally combined to create quirky color contrasts, such as palm green paired with olive green, or brick red with ruby.

The spring collection will be available on Gilt.com and in the soon-to-open Excelsior department store in Milan, among others. Retail prices start at 180 euros, or $261 at current exchange rate, for a shirt and 220 euros, or $320, for the Bermuda shorts.

Carhartt Work In Progress, the European branch of Carhartt U.S.A., was established in 2004 as an edgy streetwear brand. It revisits Carhartt’s bread-and-butter workwear with a more fashion-forward urban spin but the same quality and comfort standards.

In a celebratory nod to the mother company, which was established in Michigan in 1889, Carhartt will also showcase the Heritage line, featuring the label’s first logo, a train car superimposed on a heart.

After mining the archives, the brand’s most iconic pieces were redesigned with slimmer cuts while maintaining the original colors and prints. In addition, the company revived the “slub” yarn, spun with traditional methods to deliberately create an irregular surface.

On June 16, Italian online retailer Yoox.com will host an event at the Giardini Corsini in Florence to present a capsule collection of ethical accessories designed by Vivienne Westwood.

The rest of the collection, consisting of handbags, travel pieces and keychains, will be sold at Vivienne Westwood’s flagship stores worldwide with prices ranging from $49 to $339. The initiative is part of the Ethical Fashion Africa Project founded by the British designer in collaboration with the International Trade Center, the joint agency of the World Trade Organization and the United Nations, to help people in need all over Africa.

Besides celebrating the 60th anniversary of its pant brand Incotex, Officina Slowear will use Pitti Uomo to unveil the winner of its talent search called “Slowork Project N. 001.”

To that end, the Italian company selected two fashion design students attending the Milan-based European Institute of Design, and asked them to create a total look.

The 21-year-old Giulia Ceragioli turned to sailors for inspiration, matching cotton drill chinos with a tattoo-inspired heart print on the back with a blue cotton lint boat-neck sweatshirt and a white cotton T-shirt embellished with a rope motif print. “Sailormen are unconventional figures and tattoos something permanent, so I think that they well represent Slowear, which delivers iconic and timeless products,” said Ceragioli.

Leandro Mazzocco, a 22-year-old student studying outerwear design, referenced the ancient trade routes, playing with prints that include a lion motif inspired from a vintage Indian fabric and the W1951 code shown on linen chinos, while an African-inspired striped vest is worn over a batik cotton shirt.

The capsule collections will be available in the Officina Slowear store worldwide.

Pringle of Scotland will be at Pitti Uomo this June presenting “The Pringle Archive Project 1815-2012,” developed in collaboration with the Central Saint Martins College of Art and Design.

One part of the project involved B.A. fashion students specializing in history and theory who researched and catalogued the Scottish company’s archive while M.A. students designed men’s and women’s knitwear pieces, taking their cue from the vintage collections.

The 33 styles will be available at select boutiques worldwide and at Pringle Of Scotland flagship stores in the U.K. with prices ranging from 145 pounds, or $237.50, to 495 pounds, or $810.60. They feature paisley patterns for women and graphic intarsia motifs for men, including a degradé colorblocked striped cashmere cardigan by William Hendry.