Arrow, Liberty of London and Façonnable are among the brands to check out at the upcoming show in Florence. 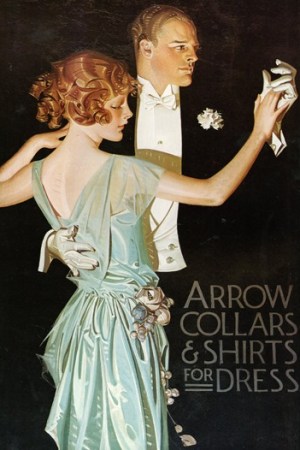 Appeared In
Special Issue
Men'sWeek issue 01/06/2011
Arrow
The Arrow man is about to go international.

With an American pedigree that dates back 150 years, the iconic image made famous by the illustrator J.C. Leyendecker is preparing for its European debut. “We know we have a diamond in the rough,” said Michael Arts, president of Phillips-Van Heusen Europe, which owns the brand. “And we’re looking to shine it.”

Arts, who went back into the company’s extensive archives for inspiration for the collection, is sticking with Arrow’s long heritage for the initial push. “Our approach is really simple,” he said. “We will launch three different classifications in the shirt category only.”

The classic model is the most traditional and will be available in five colors and three fits. A casual model, geared toward weekend wear, will be offered in two fits, and a contemporary style will be offered in a variety of fits and colors with a “washed-out, vintage look.”

Each tier will offer a “strong in-stock program,” he said, noting PVH’s Tommy Hilfiger division will handle the back-office details for the brand, allowing it to “start faster” than a traditional start-up.

Arts said Arrow will focus initially on retailers in Spain, Italy, Germany and the U.K. The company also will host a retrospective at its booth at Pitti and its showroom in Amsterdam to share the brand’s history with potential customers.

Add Bags by Andrea Incontri
Italian outwear brand Add, known for its fitted, lightweight down padded jackets, has chosen Pitti Uomo to launch a bag collection, designed by Andrea Incontri, who won the Who’s On Next talent search in the accessories category last June.

“About 10 years after our debut in the fashion industry, we wanted to start a new project,” said Maurizio Cittone, chief executive officer of Comei & Co., which owns and manufactures Add. “We enjoyed the idea of applying our specific tailoring approach and our signature clean design to a different category.”

“Add focuses on products that communicate an urbane attitude, mixing practicality and elegance,” explained architect and designer Incontri, who also will be at Pitti with his own bag line, named Ai_. He said the aim was to design bags that aren’t status symbols but are functional and adaptable.

The unisex collection includes 13 styles that can be grouped into four different categories. The foldable bags feature leather bases and nylon taffeta bodies that can become pocket sized, while the calf leather shoppers can be completely reversed to show their more sporty nylon side. In a nod to Add’s core business, Incontri designed a goose feather down backpack, which also can be carried over the shoulder thanks to the horizontal shape, reminiscent of vintage schoolbags. In addition, there are more formal leather models, featuring traditional handcrafted details and graphic outlines.

“The collection is totally black because I wanted to deliver non-seasonal bags that looked conventional but with very specific functions at the same time,” Incontri said.

Ballantyne
Under the tutelage of new creative director Yossi Cohen, Ballantyne is embracing its Scottish heritage.

“We plan to respect our Scottish roots linked to a sporty yet luxurious attitude, yet aim to redefine our aesthetics, injecting the label with a global image. Our goal is to turn Ballantyne into a lifestyle brand,” Cohen said.

Appropriately for the Scottish cashmere brand founded in 1921, knitwear represents the core of the collection. The iconic diamond intarsia motif is revisited in different variations, including an irreverent oblique version. For cashmere sweaters — which will retail from 300 euros, or $400 at current exchange, to 1,000 euros, or $1,332 — innovative sprayed and washed fabrics also have been introduced.

“In order to show how the concept of tailoring can be applied to knitwear, we will also launch a knit-to-order service in our flagship stores,” Cohen said. “Selecting from among 40 different colors, customers will be able to create their personal diamond intarsia sweater.”

Besides knits, there are also ultraslim stretch jersey jackets worn as cardigans for a second-skin effect, flannel jogging-inspired pants and baggy cotton cargos.

“We don’t want to appear too trend oriented because our clothes are designed to dress the international establishment, which demands wearable luxury pieces,” said Franco Natalucci, chief executive officer.

In addition to its luxury range, the company is offering a lower-price option as well, which will be manufactured in Italy and will include fabric other than cashmere.

“For 50 years, we’ve been about classic American shirts,” he said. “So we’ll be presenting that with an accent on pieces we dug up from our archives.” Among the offerings will be classic and heavy chambray; a series of brushed, bold, dark plaids, and a batch of oxford cloths — “things that [scream] Americana” and will hopefully “be embraced by the rest of the world.”

He stressed that, unlike much of the label’s offering in the States, there will be “zero emphasis on dress shirts” in Europe. Instead, the shirts will “rumple up real nice,” Heiser said. “It ain’t a dress shirt.”

Price points for the core products will average $125 to $145 at retail, and initially, two fits will be offered: a classic and slim cut.

Although the products offered at Pitti will be ready-made shirts, Individualized Shirts’ strength in custom shirts also will be a talking point for potential customers. “Customability is something we’ll talk about,” Heiser said, noting the company is definitely open to taking that route if the opportunity is right.

“Europe is an important experiment for us,” Heiser said. “But we’re very confident it will succeed.”

Liberty Of London
The sporty-chic spring collection presented at the last Milan Fashion Week was just a taste of what’s to come. Pitti Uomo will host the official debut of Liberty of London, the line produced by Italian manufacturer Slowear for the U.K. department store. To mark its English attitude, the collection will be unveiled on Tuesday at the Harold Acton Library of the British Institute in Florence.

“With Liberty we share the same intellectual approach to fashion,” said Slowear chief executive officer Mario Griariotto. “We both have a strong heritage and we both believe in the importance of paying maximum attention to customers.”

“Tailoring will be the pivotal aspect of the collection,” added Marco Sartorelli, who was tapped by Slowear in March to head design for the brand. “We took inspiration from Mohammad Ali Jinnah, an Indian political figure active in the first half of the 20th century, who, during his decadelong stay in Great Britain, became keen on English tailoring.”

Cotton drill and nylon oversize pants are paired with Twenties- and Thirties-inspired shirts with high, stiff collars, while blazers feature cropped and slim silhouettes. Coats and trenches are both available in a traditional wool version and in technical fabrics.

The color palette ranges from mélange gray and chocolate brown to military green, with blue and red shades in the prints.

The Nice, France-based label will return to the trade show arena at Pitti Uomo to showcase an updated look and more frequent deliveries.

“Our goal is to attract younger-thinking people,” said Lance Isham, chief executive officer. “There’s a full generation of male customers who have never thought of us. The Façonnable consumer has aged with the brand.”

To reverse that trend, Isham said Façonnable will offer several deliveries under its Blue Collection. The first, Campus, will kick off in July and will offer products with a “back-to-school sensibility,” Isham said. The offerings are designed for the guy who “wants to feel confident and comfortable.”

In August, the Lodge collection will make its debut, which Isham described as “an outdoor casual-sportswear concept appropriate for all climates.” For those seeking more formal options, Metropolitan will offer pieces more appropriate for the workplace.

The next month, Megeve, an après-ski line, will be offered, featuring “the best fabrications in yarns” for its sweaters, as well as complementary shirts and pants. “This is part of the heritage of Façonnable, but we’re creating more interest to gain and develop another customer,” he said. Isham stressed, however, that the company will work hard not to lose its existing client with this new product range.