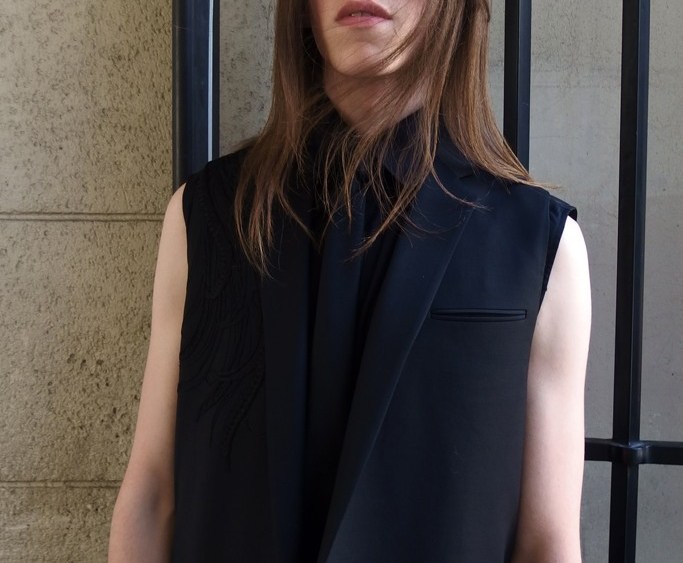 When Tokyo-based Masanori Morikawa founded Christian Dada in 2010, he deliberately chose a nonconformist stance to fashion. Done mostly in black, his designs, with the Dadaism movement as their leitmotif, embrace imperfections as integral elements of fashion and today count Lady Gaga and Kiss among their fans. Showing in Paris for the first time, Morikawa’s spring collection, titled “Infinity,” is slated to incorporate 3-D jacquard and the Nishijin jacquard, a traditional Japanese fabric originating in Kyoto, along with embroideries whose fragility Morikawa wants to juxtapose with heavy outerwear, including leather biker jackets.

Morikawa, who used to work for London-based designer Charles Anastase, says he chose Paris over London (he previously showed in Tokyo) because it was “better for business. London is an open door for young designers. But everyone comes to Paris, so we can show to a lot of different people. I would like to [cause a] worldwide Dada-mania,” he mused.

Moving his presentation from London to Paris this season, Mohsin Ali said, “London is very inspiring, but not the right place for my brand. Men’s wear for me has always been in Paris.” The 38-year-old former buyer from Yorkshire, England, explained he always approaches a new season with a specific story in mind. “I listen to the fabrics; luxurious [ones] are key because they give you a better handle, and I design the product from there,” he said.

Spring 2015 has the Viennese arts as its underlying theme. Ali found inspiration in Gustav Klimt’s paintings, borrowing from the artist’s golden period, a fresh choice given the fact that Mohsin’s predominantly monochromatic designs focus almost exclusively on black. “You can’t hide behind black. Black allows you to go deeper into the silhouette and fabrication. With a lot of color and pattern around, the eye automatically moves to other parts of the garment, but I’m trying to steer away from the sharpness of it, so there is also a bit of navy and brown in this spring-summer season.”

Ali said it took him a while to figure out how to tackle the metallic gold theme without being too conceptual, finally opting for a quiet approach employing the flashy hue in bonding and graphic inserts on roomy yet tailored silhouettes, perfect for the urban male.

With a creative and streamlined approach to leather goods, Isaac Reina has gained a solid base of aficionados.

Training under Véronique Nichanian at Hermès for eight years provided him some serious experience in producing timeless, quality products. Obsessed with geometry, this Paris-based Spanish designer first studied architecture, a skill that is visible when closely inspecting the details of his construction. Pure and simple at first, they often reveal clever stitching details, and graphic elements are utilitarian as well, such as holes that serve as tongues for little purses or wallets.

This season, in a ode to the industrial aesthetic of the design, his elementary shapes are electrified by a surprising use of color, inspired by figures such as Jean Prouvé and Charlotte Perriand.

The entire spring collection is done in the three primary colors: saturated yellow, magenta and cyan, complemented by a couple of commercial black pieces.

The men’s collection, along with his first pre-collection, will be displayed as an installation in Galerie Anne Barrault in the Marais district from Friday through July 4.

Designer Laurence Chauvin-Buthaud first created Laurence Airline as a women’s collection, but after dressing a couple of male musicians, including Nigerian singer-songwriter Keziah Jones, she decided to turn her full attention to men’s wear.

Born in Abidjan on the Ivory Coast, Chauvin-Buthaud’s designs speak to her African origin. “West Africa meeting other continents” is how she defines her collection of colorful and graphically printed clothes in simple preppy-looking shapes such as Bermuda shorts and short-sleeve cotton shirts.

Because of her commitment to sustainable production, she produces the line in her own factory in Africa.

The spring lineup mixes and matches bold prints such as big polka dots, papaya seeds and lush jungle agave leaf motifs on crispy honeycomb cottons and fluid jerseys. Like African Pop Art, these fabrics provide a twist to her simple, tailored wardrobe of shirts, tunics and pants, looking elegant enough to get rid of the jacket in warm climates.