Ones to Watch Paris Fashion Week

Keep an eye on these emerging designers. 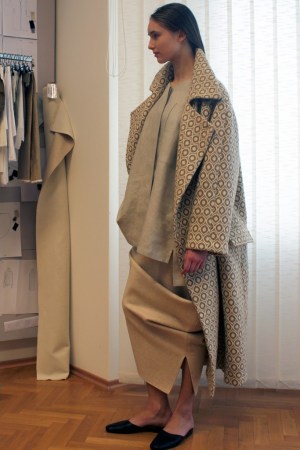 Nehera, an industrial empire from the Czech Republic founded by Jan Nehera in 1923, is credited with being one of the first vertical ready-to-wear fashion brands. In the Thirties, the label had its own garment factory in Prostejov and stores on three continents — in Central Europe, the U.S. and Africa.

Now based in Bratislava, the pioneer fashion label was resurrected in 2013, and it’s revving up for a new start with recently named artistic director Samuel Drira, one of the founders and fashion director of Encens magazine, as well as a creative consultant for brands including Hermès and The Row. Nehera’s fall collection will be the first entirely done under his lead.

Drira cited German-born, American artist Eva Hesse as one of his main inspirations. He crafted organic silhouettes with curving volumes and the aim of creating soft sculptural looks. Entitled “Out of Focus,” the collection aims to blur the notion of identifiable pieces with numerous layered looks playing on trompe l’oeil effects and asymmetric combinations.

Voluminous and voluptuous in proportion, the designs reflect a precise sense of detail: The lining of some collarless jackets is part of a decorative layering element, while all the fabrics have been cherry-picked for their rustic dry hand.

Andreas Huber, a visual communications graduate who trained with Kostas Murkudis, and Raúl Egloff Alcaide, a fashion designer who studied at the Royal Academy in Antwerp, teamed up to start Huber Egloff in 2012.

The Swiss duo met when they were working at Akris a few years prior. Although they have designed lines for a few seasons, this fall edition is only their second commercial collection.

Inspired by the eclectic sculptures of German artist Isa Genzken, their 16 fashion looks are melded from a collage of currents. There’s the schoolgirl-meets-tomboy-skater element, with the pair citing the Z-Boys gang as an inspiration for graphic T-shirts and boxer shorts that peek over the elastic waistbands of wide-legged pants and flared skirts. Arty touches include mirrored tape bands adorning transparent PVC jackets and tops — a direct reference to Genzken sculpture — as well as Perspex accessories, like a neon pink belt or long, clear tube-shaped jewelry designed with Milko Boyarov.

The mix-and-match collection is manufactured in Switzerland and Italy, and integrates high-quality, classic fabrics, like a luxurious striped, pleated cotton, or more high-tech material, such as a polyamide and aluminum blend used for technical Windbreakers.

With simple shapes playing on fabric and proportions, the clothes are wearable and fall into the young creative contemporary segment with retail prices running from around 200 euros, or $227 at current exchange, for a top to around 800 euros ($907) for a silk dress and 1,000 euros ($1,134) for a coat.

The collection will be on view from March 5 to 13 in Syra Schenk’s showroom, Agence Saba Demian, at 27 Boulevard des Italiens in Paris’ second arrondissement.

Her creations, infused with Thirties and Forties styles, are feminine and mysterious, taking inspiration from film greats like Bernardo Bertolucci and Michelangelo Antonioni as well as spiritual celebrations of different ethnicities. Amati once used kabbalistic geometry for embroidery design, for instance.

Based in Rome and living part time in Ibiza, she’s showing in Paris for the first time. She has stuck to her design ethos, presenting a romantic collection done with sensual juxtapositions of materials, such as silks and leather or jersey and wool — embellished this season with print and embroidered patterns taken from the Shipibo Peruvian rainforest tribe, whose healing mantras appear on textiles resembling intricate, linear geometric artwork. Such motifs are printed on jersey or embroidered on silk shawls and leather bomber jackets to convey messages of poetry, beauty and peace.

Amati will solicit some friends to collaborate for the big reveal: Italian actress and director Asia Argento, who once produced a movie for Amati, and French actress Emma de Caunes, who will mingle with the 10 female models during the esoteric and cinematographic presentation.

Made in Italy with high-end Italian fabrics, the presentation will be an ongoing performance on March 8 between 6 and 8 p.m., at 153 Avenue Ledru-Rollin in the first arrondissement.

Christelle Kocher wants to celebrate the know-how of Paris ateliers. A graduate of London’s Saint Martin School, Kocher has held positions at numerous houses including Chloé, Dries Van Noten and Bottega Veneta, and for the past four years, she has been the artistic director of the Lemarié atelier, a supplier of handmade embroidery, feathers and silk flowers for couture houses and high-end luxury brands.

She launched her brand Koché, which she defines as “couture à porter,” in January, aiming to blend the casual energy of streetwear with couture craftsmanship.

For example, her ostrich-feather coat embroidered with chunky crystal is lined with gray cotton jersey and worn simply with sweat shorts and a T-shirt. There are also T-shirts in nylon mesh embellished in front with a Thirties-inspired embroidery motif mixing the savoir-faire of couture with the informality of streetwear.

Citing contemporary artists like Gerhard Richter, Donald Judd and Christopher Wool as sources of inspiration, she energizes traditional embellishment and embroideries made by suppliers such as Lemarié, Lesage and Montex.

Kocher wants her collections to reflect the evolution of a contemporary wardrobe with foundations steeped in exquisite artisanal craftsmanship. The high-end line is entirely made in France, with prices to match, running from 750 euros ($850) for pants, to between 5,000 and 7,000 euros ($5,670 to $7,939), for an embroidered dress. A simple jersey coat goes from 1,600 euros ($1,814) to 3,500 euros ($3,970) for more elaborate models. Ikram in Chicago already carries the line.

Koché will show at the Designer’s Apartment showroom in Atelier Richelieu, 60 Rue de Richelieu, in Paris’ second arrondissement, from March 6 to 12.

Merikoski has worked primarily as a men’s wear designer for houses including Givenchy and Louis Vuitton. Rooted in Finnish culture and society, Aalto design takes a realistic approach to clothing and inspiration from Finland’s youth culture.

Entitled “Young Heroes,” the fall collection gives a nod to rebellious youth of the Nineties as seen in the photographs by Jouko Lehtola, who documented the life of the country’s club kids of that era.

Merikoski aims to promote Finnish culture in his line. To wit, the brand, which had access to the late photographer’s archives, will publish a book of his work. Lehtola’s pictures are also printed on Aalto’s jersey T-shirts and sweatshirts.

The collection of wardrobe basics focuses on easy, comfortable volumes. The line includes a biker jacket with a straight, boxy cut, while wide-legged pants with a deep front pleat and fitted back are in a polished black wool or casual cotton twill. Cropped tops in knit or leather echo the rebellious Nineties looks.

Based in Paris, the line is made in Portugal and London, and is completed by a shoe collection. Aalto will be presented in a live tableau format evoking the melancholy of Aki Kaurismäki movies on March 6 at 10 a.m. at Faust, the restaurant under the Pont Alexandre III bridge in Paris’ seventh arrondissement.