Ones to Watch in Paris

A look at what’s new on the Paris Men’s scene. 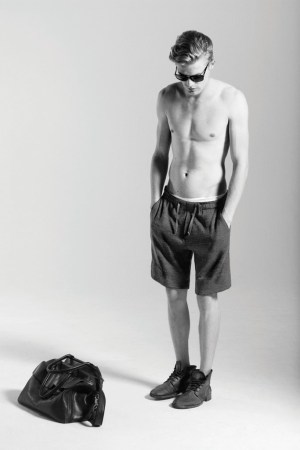 Founded in Munich in 2012 by two friends, entrepreneur Sebastian Kaiser and model Lenz von Johnston, the Boulezar label has made it its mission to bring comfort into a men’s wardrobe without compromising elegance.

Its main focus is on jogging pants in upscale fabrics. “The idea is to produce a pair of joggers, which are comfortable enough to sleep in on a long-distance flight and wear to a formal dinner,” said von Johnston, creative director.

The spring 2014 collection spans about 25 pieces and is based on silk-satin, light summer cashmere and terry. It includes a two-piece suit made from a combination of rayon and spandex. “It feels like a jogging ensemble, but looks like a suit. It took us some trying, too, because it’s difficult to make a suit that is flexible enough for unhampered movement and stays in shape at the same time,” the former Gucci model explained.

To assist with its venture, the brand tapped the sartorial know-how of Anke Naumann, who is credited with designing the first snowboard suit for Head, the premium sports equipment manufacturer.

Other novelties this season include soft linen pants with custom-made waistbands and a range of double-faced shirts and sweaters that are “soft cotton on the one side, terry on the other — and you can wear them either way, which [further] stresses the whole multitasking notion,” von Johnston said.

Bottoms retail for between 200 euros and 800 euros, or $266 to $1,067 at current exchange. Until now distributed exclusively in Germany, Boulezar will participate in the Tranoï trade show in Paris.

Urban chic is the style territory of Paris-based label 13 Bonaparte. Founded by David Sarfati in 2011, the brand’s signature is functional, contemporary apparel with a clean aesthetic.

Sarfati, who was charged with brand development at Estée Lauder and L’Oréal earlier in his career, before switching to the image department at French department store Galeries Lafayette, said his jerseys are probably the best way to discover his brand. He is also very strong on outerwear, made from chevron and denim in particular.

“Revisiting the basics and making them evolve is the whole point of it,” Sarfati said.

His collections are numbered to suggest continuity and evolution. He stopped exhibiting at trade shows, choosing to focus on his Marais boutique-cum-showroom, which opened at the end of 2012. “It’s the best window for us. Here I get to be in touch with the customer and understand what he wants,” he said.
The space at 2 Rue de Normandie blends books, art photography and vintage furniture.

Pieces retail from 80 euros for T-shirts, or around $105 at current exchange, to 600 euros, or $787, for jackets, most of them made in France, with the exception of jerseys and knitwear, which are manufactured in Portugal and Scotland, respectively.

Next on his agenda: a range of accessories. Sarfati already offers belts and bags, but his dream is “to have a collection of shoes, one that fits all my styles, minimalist and chic by nature,” he said. “We are currently researching partners in France.”

“I wear stuff from my boyfriend’s wardrobe; he tells me he would like to be free to choose his. There is a generation here that’s less traditional and more open-minded. It’s really time to think outside of the box,” she explained.

Hahn is a trained patternmaker, which allows her to produce coed pieces, but they nonetheless remain gender-specific based on two different sets of patterns.

This season will also see Hahn’s debut on the official calendar of the Chambre Syndicale du Prêt-à-Porter. The designer is also planning an artistic joint venture: a pop-up store in Paris, combining fashion, fine art, music and cuisine.

Why? “Because fashion is not enough; I want to take it beyond,” she said.

Since graduating from Antwerp Academy in Belgium in 2010 at the age of 23, Belgian designer Cedric Jacquemyn has developed a full ready-to-wear business with his partner, art director and photographer Yves De Brabander.

Jacquemyn honed his business sense through an early collaboration with Swedish chain Weekday. The H&M-owned retail chain produced and sold his solo collection in 2009, then helped him launch a secondary collection called Hraun, which it carried exclusively for a year, starting with fall 2012.

For spring 2014, the secondary line will go on general sale, with items mixed into the main collection on the Paris runway.

A dark romantic, Jacquemyn uses only natural fabrics for collections that meld a current Goth aesthetic with more political concerns, such as global warming or sociological issues. His new rtw offering, for instance, is a reflection on the impact of industrialization on the Amazon rainforest and its native ethnic tribes.

While fair trade and hand-spun fabrics made by family-run businesses in Peru or Japan have been key to past collections, this season sees the introduction of Indian hand-woven fabrics, in addition to leather pieces knit in his Antwerp atelier for the love of “showing the manual process,” Jacquemyn said.

With a palette of hand-dyed black, beige, olive green or washed whites, the collection has an earthy feeling via highly textured fabric combinations such as deconstructed knit tops, washed or glazed linen jackets and pants or open-mesh shorts.

The silhouettes are long and loose, often playing with layers and transparency. As for jewelry, a line that has grown organically alongside the rtw, this season will see the introduction of hammered copper bracelets.

“We don’t come from the fashion world, but our graphic and artistic activities brought us organically to make clothes,” said Egry.

After a few seasons promoting the brand on the trade show circuit, the duo have chalked up an extensive list of retailers in Asia and U.S. Earlier this month, they opened a pop-up store in the Upper Marais district of Paris featuring bespoke furniture by Switzerland-based designers Terrazzo Project, which will serve as the backdrop for their spring-summer presentation.

“Modern media is one of our big inspirations,” said Arbet. “In this collection, we wanted to mix the idea of digital world aesthetics with ethnic touches.”

The graphic prints are used head-to-toe on some looks, including baggy silhouettes such as djellabas and slouchy pants. The collection’s woven pieces are produced in Portugal using high-end Japanese fabrics and French jacquard, while knits are made in Italy. A selection of hats and bags finish off the looks.

With their first store opening during fashion week in the Upper Marais district of Paris, surf-addicted brothers Lucas and Séverin Bonnichon, the founders of Cuisse De Grenouille, are catching a wave — literally.

The 450-square-foot store at 5 Rue Froissart — a stone’s throw from Acne and Merci — features curved wooden panels that run from floor to ceiling, evoking a tube wave, and a table shaped like a long board, designed by Joran Briand and manufactured by a professional shaper.

“We want to create a sort of urban surf style,” said Lucas Binnichon. “We’re looking back at Fifties surf culture and the photography of LeRoy Grannis, when surfers were more dapper.”

The line, launched in 2010 as a collection of boardshorts and accessories, has expanded into a full wardrobe of urban sportswear staples that exude beachside spirit without resorting to the usual loud prints and garish color. Their classic sweatshirt, for example, is made of indigo-dyed cotton featuring the tone-on-tone embroidered message “Surf in Paris.”

For spring 2014, they rework classics in a sun-bleached color palette, while the aforementioned wave print will adorn an oxford shirt, T-shirts and Bermudas in the manner of a signature monogram.