Here are some brands to look out for at the upcoming Pitti Uomo trade show in Florence. 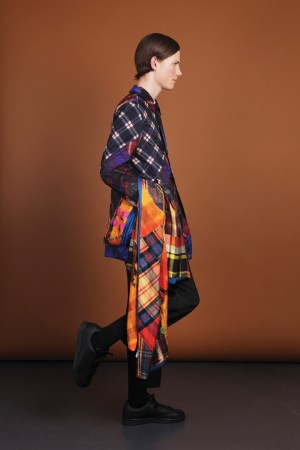 From an Italian newbie to a capsule line for an established label, here are some brands to look out for at the upcoming Pitti Uomo trade show in Florence.

This story first appeared in the January 6, 2016 issue of WWD. Subscribe Today.

“One year ago, I bought one of his scarves during a trip in Japan,” said Herno president Claudio Marenzi, explaining the reason behind the co-branding project developed by the Italian outerwear company and Pierre-Louis Mascia, which will be introduced in Florence. “It immediately came to my mind that in the Sixties and the Seventies, we used to sell trenchcoats lined with printed foulard fabrics and here we go.”

An urban Sherpa is the man that Mascia had in mind when designing the capsule, which will feature pieces with retail prices ranging from $750 to $1,200.

According to Marenzi, the collection includes 15 men’s pieces with a sporty yet metropolitan attitude, such as trenches, coats and down jackets decorated with Mascia’s signature bright, vivid patterns. These include tartan patchworks, camouflage, pajama-inspired stripes and tribal motifs influenced by vintage carpets.

“The capsule’s distribution will be the same as the main line and we expect this project to reach all the markets,” Marenzi said. — ALESSANDRA TURRA

Exley NB may be a new addition to the men’s wear scene, but it is rooted in American heritage.

The Massachusetts-based outerwear label, which will be part of Liberty Fairs’ Born in the USA capsule at Pitti Uomo, launched for spring and immediately caught the attention of specialty retailers such as Atrium and American Rag.

Its claim to fame is timeless styling and high-quality construction, with all products manufactured in the brand’s own 12,000-square-foot factory in New Bedford, Mass.

“We’re developing a story around the modern New England lifestyle,” said Exley president Chris Vroman, whose background is primarily in private equity. “It’s not stereotypical, but it embraces the things that are prevalent in the area,” including a “hardworking” ethos and rich historical references.

In fact, the Exley name is derived from an Old English word meaning “the settlement by the river,” which references the brand’s headquarters next to the Acushnet River, and the NB is for New Bedford.

In terms of product, this translates into a tight collection of 12 to 15 styles and 40 stockkeeping units of overcoats, parkas and flight jackets that offer up modern interpretations of classic silhouettes in a blend of natural fibers and technically skewed synthetics with high-end detailing.

Vroman said a key piece in the line is a utility duffel that is seam-sealed and waterproof and is “very representative of the brand with its high-quality raw materials and attention to details in the construction.”

Price points for the collection have not yet been finalized, but are expected to be slightly higher than the $400 to $600 range of the spring line. Vroman said target distribution will continue to be independent retailers such as Union Made and Steven Alan. “That’s not to say we’re limiting ourselves to specialty stores,” he said, “but our DNA would be good for stores such as these.” — JEAN E. PALMIERI

The designer, recently named creative director of Italian outerwear specialist Peuterey, was previously in charge of designing the men’s collections for Iceberg.

“The idea behind the brand is to create a new form of luxury,” said Curradi, who focused on the use of eco-friendly fabrics and sustainable production techniques.

Curradi constructed the outerwear using knitwear techniques and combining silk with knitted fabrics. The collection spans from parkas and sporty jackets to traditional coats in four constructions. These are paired with sweaters, as well as pants in various silhouettes.

“I tried to infuse in the pieces the idea of how humans destroyed the planet,” Curradi said. The result: pieces with nontraditional proportions, as well as in a palette focused on powdery tones with “an oil color-like effect.”

“Trying to develop a sustainable project, I also wanted to offer pieces that are a good value for money,” Curradi explained. — ALESSANDRA TURRA

Vittorio Branchizio will present the fall 2016 collection of his namesake brand with a runway show in Florence on Jan. 13.

Branchizio, who studied fashion drawing at Brescia’s Istituto di Moda Industriale, cut his teeth in a tailor’s shop prior to joining the design team of a knitwear label. The designer introduced his own brand in 2014 and then, in June, won the “Who Is on Next?” men’s talent contest promoted by Vogue Italia.

“I’m developing my personal path in collaboration with artists working outside the fashion industry in order to enrich my personal point of view with different contributions,” said Branchizio, who is focused on the study of yarns and their reaction to dyes for his knitwear creations.

The designer also teamed up with origami artist Uros Mihic on exclusive flat pleated decorations crafted from cotton and polyester that embellish trousers and shirts.

The collection will feature an extensive outerwear selection including pieces where knitted materials are combined with thermo-stitched fabrics, as well as deconstructed coats and a hybrid of a biker jacket and a bomber. These are worn with cotton and wool pants with Japanese-style silhouettes, elongated shirts resembling Arabian tunics, as well as a range of sweaters with different weights. Everything is worked in a color palette of blues, pinks and icy tones.

Wholesale prices range from $76 for basic knitwear or $326 for the outerwear. — ALESSANDRA TURRA

Adidas Originals has tapped another cool kid brand to amp up its fashion quotient. This time around, the German activewear company has partnered with White Mountaineering, a Japanese line known for its innovative use of outdoor-inspired technical fabrics.

“Adidas has an incredibly rich history as a brand, and with so many products and stories over the years, working on the inside, you often see things in one certain way,” said Nic Galway, vice president of global design for Adidas Originals.

The collaboration started with a collection of sneakers released last September, and was followed by an expansive footwear and apparel line for spring that was shown during Paris Men’s Fashion Week.

The brand will launch the fall collection at Pitti, which focuses on merging sportswear with fashion in a technical way.

“Autumn-winter is the season I am good at, so we created outerwear mainly with Adidas’ technicality and originality,” Aizawa said. “It is based in the outdoors, but it’s a different approach from White Mountaineering.”