While the designer’s big debut garnered largely lukewarm reviews from the press, many retail bigwigs raised a finger in objection.

By Miles Socha and Samantha Conti and Joelle Diderich on October 4, 2012
View Slideshow 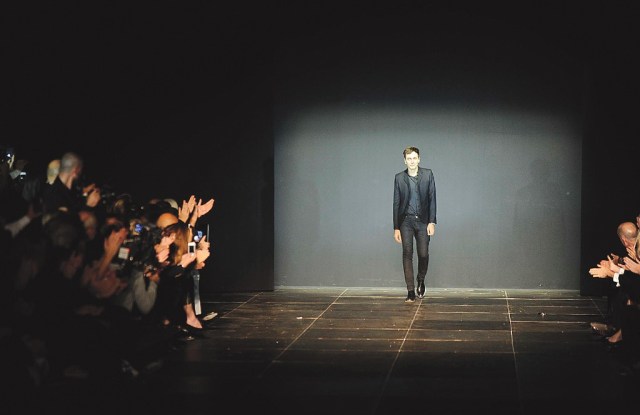 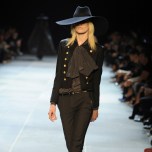 PARIS — Did one of the most hyped shows of Paris Fashion Week — Hedi Slimane’s debut at Saint Laurent — sizzle or fizzle?

This story first appeared in the October 4, 2012 issue of WWD. Subscribe Today.

That depends on whom you ask.

While Slimane’s big debut Monday night garnered largely lukewarm reviews from the press, and a few barbs, many retail bigwigs raised a finger in objection.

“I loved it,” Pete Nordstrom, executive vice president and president of merchandising at Nordstrom, told WWD on his way into the Alexander McQueen show Tuesday night. “We were very encouraged by what we saw. It was definitely one of the highlights of the week.”

Mark Lee, Barneys chief executive officer, went further, saying “there was a unanimous and spontaneous love from all the Barneys team members immediately after the [Saint Laurent] show.”

Lee’s opinion carries an insider’s weight given that he was at the management helm of YSL from 1999 to 2004, orchestrating the creative transition from Tom Ford to Stefano Pilati, who Slimane succeeded earlier this year.

Indeed, Lee pointed out Ford’s most successful collections, both commercially and press-wise, sprung directly from house codes. These included Ford’s “gypsy” and African collections, plus a color-drenched, Forties-inspired show for fall 2003.

“YSL is one of only two French houses that has a complete style and an arsenal of iconic elements so rich as to constitute a wardrobe,” Lee said. “Critical elements of YSL style and wardrobe have been underutilized by YSL over the past 12 years and overutilized by dozens and dozens of other brands and houses. I think it was only correct that Hedi reclaimed for Saint Laurent Paris what belongs to the maison.”

Lee lauded Slimane for showing “modern, sexy, desirable clothing that the Barneys customer will want, among others, in what has been a stellar and thrilling Paris season.”

“Hedi’s collection touched both my heart and my mind. It was emotional to see him back at the house where he clearly belongs and also see the thought and care that went into this first presentation,” said Lee.

“We were extremely excited about Hedi’s first collection. It’s really going to usher in a new era for the brand,” echoed Bergdorf Goodman president Joshua Schulman, who was YSL’s executive vice president of worldwide merchandising from 2000 to 2004. “We felt there was a modernity and a diversity and we can’t wait to get to the showroom and see it all up close.”

A swath of international retailers were similarly smitten.

“The focus was very much on the cut, fit and fabrication, and this was a collection that is perfect for our customer,” said Marigay McKee, chief merchant at London-based Harrods. “[Slimane] delivered a slick collection fusing his contemporary silhouette with rock-meets-Seventies-inspired styles that echoed an iconic era of the house.”

Andrew Keith, president of the Hong Kong-based specialty retailers Lane Crawford and Joyce, said he spies great potential for Saint Laurent in the region, given widespread interest in Slimane. What’s more, the fact that YSL ready-to-wear is not widely distributed is attractive to customers looking to differentiate themselves.

“[Slimane] presented a strong, confident woman, which will appeal to the Chinese customer, and the skinny silhouette, fitted jackets and masculine approach with a softer side expressed through the use of lace, bows and frills, will work nicely on the Chinese body shape,” Keith said. “The longer dresses provide some beautiful evening looks for a younger customer and as both Hong Kong and China have vibrant social scenes, should prove successful at retail.”

Neiman Marcus was pleased that “it looked like a Saint Laurent collection,” according to Ken Downing, senior vice president and fashion director at the Dallas-based retailer.

“It’s the new cool girl’s uniform. Every girl wants those clothes before they even really get into the store,” he said. “It’s all about that skinny tuxedo pant, the spencer jackets, and I loved the softening of the very strict tailoring that he’s known for with the beautiful romantic blouses.”

The kudos from stores contrasts with reviews from top critics, many of whom found the hotly anticipated show disappointing. The front rows and Twitter also buzzed with charges that the collection was very “à la Rachel Zoe,” as blogger BryanBoy expressed himself on Twitter.

Suzy Menkes, fashion editor of the International Herald Tribune, said the show was no triumph and more of a trip down memory lane, tinged with touches of Goth and West Coast underground. “Perhaps Mr. Slimane can use the YSL codes next season to move forward from homage to something more dynamic,” Menkes wrote.

Lisa Armstrong, fashion editor of The Telegraph, allowed that “the man has taste” and that the collection was “extremely commercial.”

“What was most surprising was that it was so unsurprising,” Armstrong wrote. “Crucially, what was lacking was the frisson of the unexpected — that challenging jolt that only a really strong show delivers.”

Cathy Horyn of The New York Times was barred from the show, but wrote a review based on digital images, and found the collection “lacked a new fashion spirit. Indeed, it was as though [Slimane] refused to interpret the YSL style, beyond updating the proportions. Even the colors seemed flat, suppressed.”

The blogosphere also lit up with gripes about the alleged highfalutin attitude of YSL’s press department and the restrictive invitation policy that excluded many editors, or relegated them to standing.

Horyn highlighted that “the self-important air of Saint Laurent’s media relations –—the calls informing reporters that Mr. Slimane wouldn’t be taking questions backstage — is out of touch.”

Laura Craik, fashion editor of The Times of London, published an open letter to Slimane on Wednesday and took him to task for making journalists feel “very unwelcome” and for being overly controlling.

“I respect that you value your friends so highly, but I don’t respect some of the people on the YSL payroll who were unnecessarily rude,” she wrote. “Please don’t ban me from your next show, because I really want to see it. We all do. We like you, even though you treat us like a bitch.”

Louise Beveridge, PPR’s communications director, said the French group — parent of brands including Gucci, Balenciaga and Puma — aims to be attentive to the needs of working journalists. “We are here to build relationships,” she said. “Mutual trust is key.”