The thread of the designers’ roots defines the Orley label. 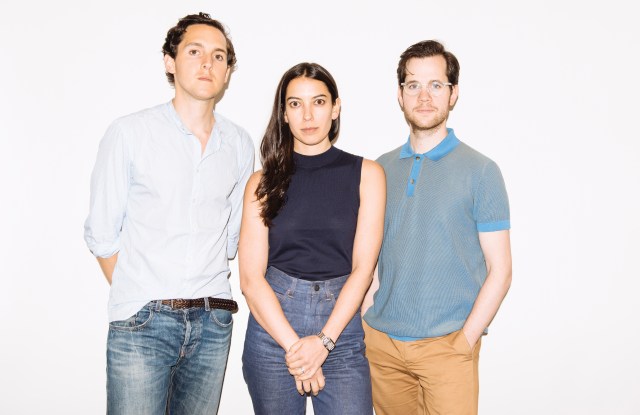 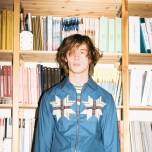 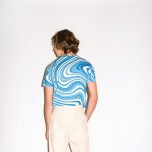 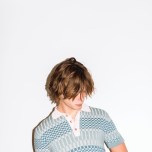 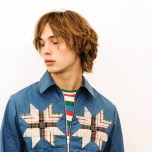 If it wasn’t for Tamakwa, Orley may not exist.

Tamakwa is the name of the summer camp in Ontario, Canada, where brothers Matthew and Alex Orley first met Samantha Florence as children. It’s also the place where they formed a bond that is as strong today as it was when they were jumping into the lake and toasting marshmallows as kids.

“We’ve known each other our whole lives,” Samantha said.

That bond became even deeper in 2014 when Samantha married Matthew.

This long-standing relationship — the trio even shares a small office in their garment district showroom in New York — is the glue that holds the Orley fashion business together.

“We put a lot of emphasis on the importance of family,” Matthew said. “It really drives the value of the brand.”

Samantha added, “A lot of our inspiration is driven by our shared experiences.”

Of the three, Toronto native Samantha is the one with the longest ties to the fashion industry. Her grandparents ran a high-end women’s apparel store called Creeds that is credited with being the first to bring designer brands to Canada.

Matthew and Alex’s family, which is from Detroit, also worked together, but in real estate, not fashion.

So it’s not all that surprising that the Orleys would follow the same familial path.

Separately, they moved to New York around a decade ago and found themselves in unfulfilling jobs. Alex, whose background is in design, was the first to relocate in 2006, followed the next year by Matthew and Samantha, who worked in production and sales, respectively.

“For Alex and me, fashion was somewhat of a left-hand turn,” Matthew said with a smile. “But the idea of working together was incubating a while before we decided to do it.”

They took the plunge four years ago, starting a business under their family name that launched with five men’s sweaters.

Although the silhouettes were familiar, the designs were youthful, yet elegant, with proprietary stitch techniques and a distinct color palette.

“With knitwear, it’s a 360-degree process,” Alex said. “You start with the yarn and build out from there. It allows for innovation and experimentation. And it’s very tactile, which is so important to make a statement in design.”

The sweaters got picked up by two retailers their first season and the Orleys also developed a healthy private customer business. “But it was still based on five sweaters,” Matthew said. “We started small so we could be focused on a singular category. And our growth spiraled from there.”

While the sweaters were technically men’s, many women also bought the smaller sizes, they said. “There’s an inherent unisex quality in sweaters,” Matthew said. “And ours were very colorful — but they were still clearly men’s wear.”

The second season, they offered around eight styles and were picked up by Bergdorf Goodman, “which gave us the encouragement to keep going,” Samantha said. Today, Bergdorf still carries the line, along with Barneys New York, Mario’s, By George, Matchesfashion.com in the U.K. and other retailers around the world.

By the spring 2014 season, Orley had expanded into a full men’s ready-to-wear collection. Women’s, which is now 30 percent of the business, was added for last fall. “We also started women’s with five sweaters,” Samantha said, noting that the women’s line remains entirely knitwear. “We’ll stick with that for the time being and build a name before we go too far.”

The men’s offering is more eclectic, ranging from bombers to jeans. “The knit polo shirts are our fastest-growing category,” Samantha said.

“Any store that comes in here is buying 70 to 75 percent knitwear and then supplementing with the rest of the collection,” Matthew said. “That’s still our core category.”

The brand is self-funded “which is why it takes so long to grow,” Matthew said. He admits that they’ve been approached by potential investors over the years, but so far, the relationships haven’t clicked. “We would want the right person to assist in our growth.”

Although Orley is new and relatively small, it has caught the eye of the fashion industry’s movers and shakers.

In 2014, it was a finalist for the 2014 CFDA/Vogue Fashion Fund Award and was nominated for the Fashion Group International Rising Star Award in Menswear. The next year, it was nominated for the CFDA Swarovski Award for Menswear, a prize it took home this year. And the brand was just added to the Tomorrow multibrand showroom, which has a presence in Milan, London and Paris as well as New York.

The trio is still marveling at the fact that Thom Browne sent over a bottle of Champagne to toast their CFDA victory. “It’s surreal,” Matthew said.

“It’s validation for the work we’re doing,” his brother added. “But it’s also up to us to push to the next level. There’s nothing promised to you in life, you’ve just got to show up and keep working.”

He believes that what sets Orley apart is its youthful outlook. That’s especially interesting since many of the designs are based on classic styles and silhouettes that their parents and grandparents might have worn.

“Our grandparents had a unique and identifiable sense of style,” Samantha said. “But Orley is more than any individual, we’ve never been trend-driven.”

“It’s a little nostalgic but there’s an inherent youthfulness in the brand that ties the men’s wear together,” Alex said. “It’s rooted in classicism, but it’s not classic. It’s a starting point that we hope takes you someplace else.”

“We want it to feel updated and modern, not vintage or retro,” Matthew added.

For the spring season, they were chosen by the Milano Unica textile fair as the men’s wear designer to participate in The Fabric Program, which is intended to educate emerging American designers on Italian fabrics and production techniques.

“Alex and I went to Italy and visited 20 mills,” Samantha said. “And they created custom fabrics for us. So the spring collection is our most special.” Matthew added, “And it’s our broadest, category-wise.”

Although they work as a team, each of the Orleys has specific responsibilities: Alex oversees the design; Samantha is in charge of merchandising and production, and Matthew runs the business end. “But we’re very collaborative,” Samantha said.

And yet the industry is littered with family businesses that have crashed and burned, so how do the Orleys make it work?

“You just do,” Alex said. “We rely on each other a lot.” “And we really understand the other person,” his brother added. “It’s not easy to put yourself in other people’s shoes, but we all work on it constantly.”

Alex said the family dynamic also “allows us to put a lot of trust in each other, which is key.”

“We’re all working toward the same goal,” Samantha said, “which is not always the case with other business partners.”

That’s not to say that they never have differing opinions. “Oh, we do fight, and we’ve had some good ones,” Matthew said.

“We tend to disagree over the little things,” Samantha said. “But like any relationship, we work at it.”