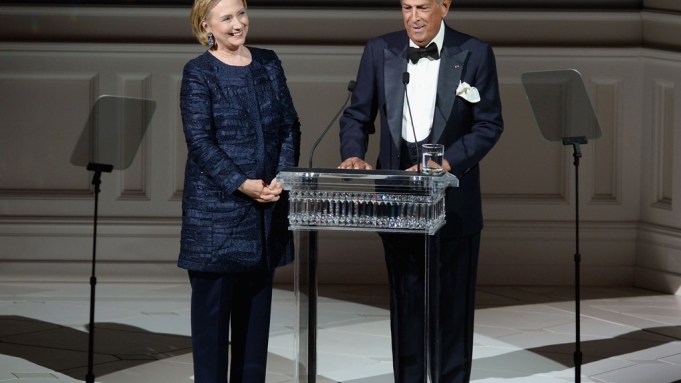 NEW YORK — Friendly as he has been with Bill and Hillary Rodham Clinton over the years, Oscar de la Renta will be making his first trip to Little Rock, Ark., Monday for what should be an eventful night.

Two private planes are lined up to fly in the designer with his family and friends to the William J. Clinton Presidential Center for the opening night party of the retrospective exhibit “Oscar de la Renta: American Icon.” The exhibition will detail his life, career and impact on the fashion world with 30 of his designs as well as photographs and video interviews. From his boyhood days in the Dominican Republic to his years spent working in Spain, Paris and eventually the U.S., visitors will get a play-by-play look at how de la Renta’s career has evolved over more than five decades.

Former Secretary of State Rodham Clinton (who honored de la Renta at last month’s Council of Fashion Designers of America awards) had the idea for his Arkansas retrospective some time ago. “I was very honored. Originally, I thought the library had some of the other clothes that I had done for Mrs. Clinton. I was told, ‘No, this is not at all about Mrs. Clinton. It’s about you.’”

Their mutual admiration is a long time running. In a 1998 Vogue cover story, Rodham Clinton praised de la Renta as “the ultimate statesman of American fashion” and “a true American original.” Although her husband left office more than 12 years ago, de la Renta would like to see her return to the Oval Office as president. “I do hope that Hillary will be our next president. They are really extraordinary people,” he said Tuesday.

For the event, Rodham Clinton will no doubt wear something designed by de la Renta, but she did not make any special requests. “I don’t even know what she is wearing. It will probably be a white jacket of mine and black pants. That’s her uniform now,” he said.

The Clintons will be joined at Monday’s party by their daughter Chelsea. Barbara Walters and Anna Wintour will also be among the well-wishers. The aforementioned are also featured in a video, which de la Renta has heard about but has yet to see. The fashion-focused exhibition is a first for the Clinton library.

Jennifer Park and Molly Sorkin, who helped de la Renta with exhibits at the Spanish Institute, worked closely with the designer to curate the “American Icon” show and to oversee its installation. Having sent pieces from his archives dating “all the way back to the Sixties,” de la Renta was reluctant to single out any favorites. “All of them [are] especially the ones that people don’t like because I feel sorry for them,” he said.

The Little Rock show will be on view through Dec. 1. In light of his recent CFDA award and a rousing Q&A at 92Y, the Clinton Library exhibition has helped make this year a memorable one. And de la Renta is ready for more fun. “Hopefully, every year is going to be like this,” he said.