The designer's 3,000-square-foot unit in Mayfair is the brand’s largest, and its third in Europe. 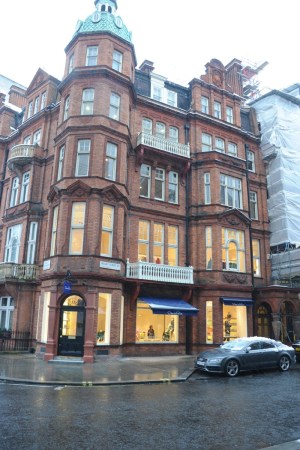 The designer has opened a 3,000-square-foot unit at 130 Mount Street, on the corner of Berkeley Square. It is currently the brand’s largest, and its third in Europe after Madrid and Athens. It is the firm’s 14th store worldwide.

“It was important to ensure that our local customer was well-serviced,” said Bolen, noting that two-thirds of the brand’s Madison Avenue business comes from customers who live within 10 blocks of that store. “We want to look after our Mayfair friends, and tourist traffic alike.”

Although Mount Street and Bond Street are an easy 10-minute walk from each other, the area around Mount Street is greener and more residential: It is home to The Connaught hotel and Scott’s Restaurant, and has garden squares, churches, townhouses and rows of red brick Victorian mansion flats.

The brand already has a solid ready-to-wear customer base in London: It has just expanded its boutique at Harrods, and also sells at A La Mode, just off Sloane Square.

The new space opened quietly last week, and Bolen said a bigger opening is planned for the spring, which he said de la Renta himself is planning to attend.

The store is housed in the former Nicky Clarke salon and has floor-to-ceiling windows on Mount Street and Berkeley Square. It spans three floors, with daywear, fragrances and handbags on the ground floor; formalwear and footwear on the first, and bridal, children’s and home wear on the lower ground floor. Jewelry and other accessories are displayed around the entire store.

London is the first de la Renta store to have separate spaces for bridal, home and children’s wear. Bolen said that when the Madison Avenue boutique, which is currently under construction, is finished next month, it will be slightly larger than the London one, and will have separate areas for children’s and homeware, but not bridal.

Bolen declined to give first-year sales projections for the new unit, but said the expectation was that it would be “as productive” as Madison Avenue, the brand’s top store in terms of sales.

He said the new store’s interiors are an “evolution” of the shop fit in the other de la Renta units. Like those stores, it features Dominican coral stone, high-gloss white anigré wood, oil rubbed bronze fixtures and plaster palm trees. The store was designed by Meyer Davis Studio Inc. The curved staircase connecting the floors has been preserved, as have the period moldings.

Next up is a store in Atlanta, which is set to open later this year or early next year, and Bolen said that the brand is on the lookout for more international locations.