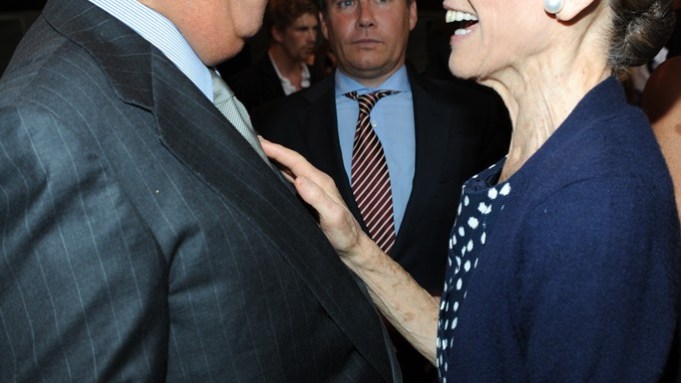 “I always design my own hats to complete my fashion thought….I like them slightly mad, like this huge black poppy. Right now I lift the bosom high on coats and dresses…I am using so many high curved belts.” — Oscar de la Renta on his first New York collection for Elizabeth Arden’s Fashion-Able custom department, WWD, 2/25/63

“Movies and gin rummy are our favorite ways to spend free time. We’re not much for sports.” — on his life with his first wife, Françoise de Langlade, WWD, 2/2/68

“He has inspired many of my fall fabrics. What impresses me the most is how contemporary his color combinations are. Many of the paintings could easily be transferred into prints for fabrics.” — on Gustav Klimt, WWD, 5/7/69

“When the president of the Republic invites us to the Elysee, we cancel our other plans.”— in WWD, 9/29/69

“At dinner, Françoise has no qualms about raving about the cooking in her own home. Oscar is often the chef — his specialties ranging from rice fried in whiskey to ham mousse and watermelon sherbet served in a fresh pineapple.” — WWD, 9/24/71

“The shirtdress with matching cardigan is the only way a woman should dress for fall evenings. It’s casual, but elegant. It makes a statement, but is not terribly dressy. And it is very sensual.” — in WWD, 4/26/72

“People have been wearing blazers at night, but they’re beginning to change. Last night, I went to a dinner party and six or eight women were wearing taffeta skirts with cinched waistlines. It’s far more amusing and, yes, glamorous.” — in The New York Times, 11/30/76

“A full taffeta skirt is for any woman who is romantic and well-proportioned. What I love best about taffeta is the sound of rustling — it’s so voluptuous and feminine.” — on his taffeta Fantasy dresses, WWD, 10/30/76

“The clothes he’ll show Monday evoke for him the simplicity of a fresh rose coupled with exotic scents from the Orient. ‘My perfume will be made from rose and ylang-ylang, so why shouldn’t my dresses be in the same feeling?’” he asks. — in WWD, 4/27/77

“A 19th-century retreat from the demanding life outside.” — on his Manhattan apartment, WWD, 4/3/79

“I think there’s something wonderful about standing in a new town in the middle of the street. Sometimes I fantasize about the caravan, being a sort of nomad.” — in WWD, 4/3/79

“Obviously my success gave me an assurance I wasn’t born with. I’ve had a stuttering problem all my life and I’m still painfully shy on the telephone. If I think the person knows who I am, I’m fine. But if they don’t, I’m very, very shy. It’s a contradiction, but if you’re shy, you dare more. You try harder to overcome your shyness.” — in W, 4/13/79

“Listen, they are fabulous. But then they have so many people for each project. There were crews of 80 or 100 people ready to carry out whatever I told them.” — on the efficiency of the Japanese, WWD, 9/24/79

“Every member of the CFDA has been asked to participate. Where was Halston when it was time to work? Why didn’t he offer to help? He doesn’t show up for the meeting, but he criticizes us. This is tough to take, believe me.” — on clashing egos at the CFDA, WWD, 7/27/81

“This customer — the working woman with so many lifestyle needs — is the most important costumer out there today. She’s a new woman, and until now I’ve been paying very little attention to her.” — on adding a bridge collection to his lineup, WWD, 1/10/96

“You need a young eye. Right now, why I love my work every day is because it’s a learning process for me, working with people who are looking at clothes in a different manner than I do. Otherwise, you always go the path you know.” — in W, 10/01

“Let’s make it very clear that certainly our company is not for sale. I mean, five years ago, before Alex [Bolen, his son-in-law] came into the mix, if somebody were to come up and say, ‘We’d like to buy the company, we’d like to buy the name,’ probably I would say, ‘Gee, I’m not going to live forever, perhaps this is something I envision doing,’ but now I look at it in a different way.’” — in WWD in July, 2008, quoted in New York Magazine, 7/7/08

“I hate nostalgia. Fashion is about now. I hate to look back. You have to look a little bit back to look forward, but it’s a business where the past doesn’t count. You’re as good as your last collection. You can do 25 great collections and if the last one was a rotten collection — you’re going to be remembered for that rotten collection.” — in WWD, 5/31/13

“When I started in fashion, I became well known because I started to sell my clothes to the stores and people were buying the clothes and then it got the attention of [the press] and Women’s Wear Daily. Today, there are a lot of designers who are famous before they have sold one single dress. I think that that’s wrong.” — in WWD, 5/31/13

“The mission of the council should evolve to help fashion not only [regarding what] they do artistically, but to really help promote American fashion outside of the United States. We are not as competitive as we could be because our tariffs are so high. We don’t produce fabrics in this country anymore. Why should there be such high tariffs today for imports? We’re paying double-duty.” — in WWD, 5/31/13

“At that time, the designer was the little guy in the back room. I have to give the credit to John Fairchild. He is the one who said, ‘I’m not interested in the manufacturer. I want to know who the guy is who makes that dress.’” — on his start in the U.S., WWD, 6/10/13

“They thought they were going to make mincemeat pie out of us, and in fact they almost did. But I have to tell you the show was wonderful. We were so unbelievably unprepared. The French went first, and you can imagine. Pierre Cardin had a Sputnik, and Yves Saint Laurent had a white Cadillac convertible…” — recalling the 1973 international fashion showdown at Versailles, in WWD, 6/10/13

“For a long time, I have always worried about what will happen to the brand when I am no longer here, so I plan to be here for a very, very long time. But having my family involved in the business, now I know there is continuity. To be clear, my only fear that I have every morning is, ‘When are they going to fire me?’” — in WWD, 6/10/13

“I strongly feel, regardless of what he did, that everyone in life does deserve a second chance, and I am happy that I was able to give John [Galliano] a second chance.…It would be a shame if the industry was deprived of such a talent.” — in WWD, 6/10/13

“I came to this country when women had a very different role than they have today. I remember when a woman walked into the restaurant in pants and she was not allowed in. I have been a witness to so much.” — in WWD, 6/31/14

“‘Fifty years I have been doing this and I think I started yesterday…to come to work every day is a huge, big privilege. And I may be totally wrong, but I think I am a much better designer today. Because I have a much better understanding of my consumer today than I had, say, 40 years ago.’ And because he’s not willing to cede an iota to younger generations of designers — a fact that keeps the de la Renta brand as relevant now as ever. ‘The day I say, “I know it all,” I should stop,’ Oscar says. ‘I think that one of the most important qualities in a human being is curiosity. And competitiveness is part of that curiosity.’” — in WWD, 6/31/14

“Our industry has not always done the best job when it comes to changes in design leadership. My hope is that, in leading this selection, and actively participating in the transition, I can ensure the right design future for our company and brand.” — in WWD, 10/13/14