De la Renta appears to be as steadfast as ever about giving the designer a second chance.

By Rosemary Feitelberg and Marc Karimzadeh on August 8, 2013
View Slideshow 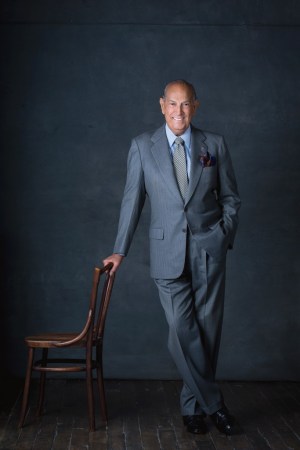 This story first appeared in the August 8, 2013 issue of WWD. Subscribe Today.

The designer is said to be in talks with de la Renta about a more permanent position at the American fashion house. This follows de la Renta’s decision in January to name Galliano as a “designer in residence” for three weeks in his New York studio, which set off a storm of criticism in the media and the fashion world despite being supported by the Anti-Defamation League.

Nearly two-and-a-half years have past since the scandal of Galliano being dismissed from Christian Dior.

Now de la Renta appears to be as steadfast as ever about giving Galliano a second chance. In a statement issued Wednesday, Oscar de la Renta Inc. chief executive officer Alex Bolen said, “As we have said before, we are deeply impressed with John’s talent and would love to find a way to work with him in the future. To date, we have not found that way.”

In January, while discussing his decision to welcome Galliano, de la Renta squelched any thoughts of a budding succession plan. “Am I retiring? Is John going to replace me?” he posed, unsolicited. “Certainly not. I hope to be around for a long time.”

The designer has repeatedly defended Galliano in public in the past few months and remains ones of his strongest supporters, along with Jonathan Newhouse, chairman and chief executive officer of Condé Nast International, and Anna Wintour, editor in chief of Vogue and Condé Nast artistic director. “I strongly feel, regardless of what he did, that everyone in life does deserve a second chance, and I am happy that I was able to give John a second chance.…It would be a shame if the industry was deprived of such a talent,” de la Renta told Fern Mallis at a 92Y Q&A in June.

Earlier this year, WWD asked de la Renta if Galliano would be back for spring 2014. He said, “We all loved having John here in the studio and would like to find a way of having him here more often.”

He also spoke — equally cryptically — about succession plans for his company, which includes a $250 million licensing business run by his stepdaughter, Eliza Bolen. “For a long time, I have always worried about what will happen to the brand when I am no longer here, so I plan to be here for a very, very long time. But having my family involved in the business, now I know there is continuity. To be clear, my only fear that I have every morning is, ‘When are they going to fire me?’” de la Renta said.

Unlikely as that is, Oscar de la Renta Inc. quietly sold a 20 percent stake in the company to GF Capital Management & Advisors in the summer of 2010 to provide additional financing to launch its own beauty business and expand retail.

At that time, de la Renta said of his designer in residence, “I work with people. I don’t work by myself. It’s so wonderful to have somebody with an eye. He’ll show me something and we talk about it.” As for where their relationship was headed, de la Renta would only say, “We have a great love affair.”

In recent months, Galliano has been trying to do some major media damage control with extensive interviews in Vanity Fair and on “Charlie Rose.” The interviews came in the wake of the media frenzy that was set off in February. At that time, the designer was blasted by the New York Post after being photographed en route to de la Renta’s studio runway show in what the newspaper described as Hasidic-like clothing. Galliano’s spokeswoman Rosenberg vehemently denied the accusation, telling WWD, “As you well know, John has worn big hats and long coats for many, many years. He indeed has long curly hair, and I can understand people/the N.Y. Post misinterpreting his look at the show. But I can assure you there was no intent to dress in a Hasidic style, to present himself as an homage to the Hasidic community or to insult the Jewish culture or pay tribute to people in 17th-century Poland on John’s part — consciously or unconsciously. The last thing on John’s mind would be to do anything that would offend the Jewish community.”

In the following months, the road to Galliano’s return to fashion became even bumpier. In May, Parsons The New School for Design nixed its “Show Me Emotion” master class that was to be led by the designer. That decision was made after hundreds signed an online petition that was posted anonymously on Change.org. But Parsons’ statement downplayed that the public outcry was a factor. “An important element of the planned workshop with John Galliano was a candid conversation about the connection between his professional work and his actions in the world at large,” it stated. “Unfortunately, we could not reach consensus with Mr. Galliano on the conditions of this conversation, and the program could not move forward.”

Earlier this year, there was speculation that Galliano would be taking a teaching job at his alma mater, Central Saint Martins College of Art and Design in London, but the college denied that.

Apparently the British actor and playwright Stephen Fry is also willing to look past Galliano’s transgressions. The designer is said to be creating the costumes for Fry’s 2014 production of Oscar Wilde’s “The Importance of Being Earnest.” A spokeswoman for Fry’s agent said Wednesday that “it is too soon to talk about the project,” which will make its debut next fall at the Theatre Royal in London.

As part of his public reform, Galliano spoke with Rose at length about his blackout drinking, ongoing recovery and the “designer in residence” stint. (De la Renta had a hand in suggesting the Rose interview.) “The collection was quite under way. At first, I was — I just couldn’t, because I hadn’t been in the studio for two years. So, I ran to the bathroom and threw myself on my knees and then I came outside and I went into the workroom and introduced myself to all those lovely ladies — the tailors and the seamstresses in their white coats. And then it was fine. My shoulders kind of relaxed,” he said.

Asked about criticism that his alcoholism had lowered the quality of his collections at Christian Dior, Galliano said, “The sales were still good. In my mind, I could always do much better. And especially now, in my lucid state, yes, I mean, of course it could be much, much better. I was doing what I felt was right for the two houses,” Galliano said, referring to Dior as well as his namesake label.

As for whether he might one day be trusted again with a fashion label, he told Rose, “I really don’t know the answer to that. I mean, I’m able to create. I’m ready to create. I’m feeling fit. I’m feeling good. It really all depends on these steps I’m taking. And I mean, I hope that through my atonement that I’ll be given a second chance.

He said of LVMH Moët Hennessy Louis Vuitton’s Bernard Arnault and Christian Dior’s Sidney Toledano, “I did try to reach out to them but my calls were not accepted. And quite recently I tried to reach out as well, but the message I got was that perhaps it was too early.”

The designer remains in a legal dispute with LVMH about his terminated contract.

In the Vanity Fair article, Galliano told writer Ingrid Sischy how the two men told him he was going to die if he didn’t do something about his problem. In response, Galliano tore off his shirt to show off a gym-chiseled torso and asked, “Does this look like the body of an alcoholic?”

He was considerably more direct with Sischy in talking about his addictions, telling her, “I was going to end up in a mental asylum or six feet under.”

Galliano also mentioned how Kate Moss, Naomi Campbell and Linda Evangelista rallied around him. “Creating Kate’s wedding dress saved me personally because it was my creative rehab. She dared me to be me again,” he said.

Sischy noted how Galliano had been “taking certain steps to atone, including reading books on the Holocaust and Jewish history, meeting with Jewish leaders and reaching out to members of the larger fashion community, including retailers, as part of the process of making amends and possibly returning to work.” Two years into his sobriety and struggling to come to terms with his words and actions, Galliano said that he knows “it sounds a bit bizarre, but I am so grateful for what did happen. I have learned so much about myself. I have rediscovered that little boy who had the hunger to create, which I think I had lost. I am alive.”