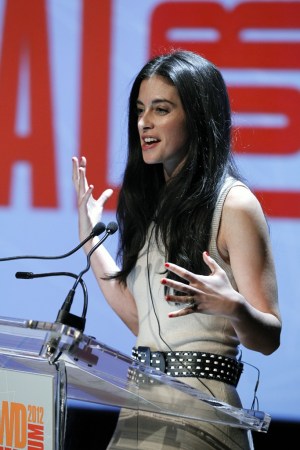 The video said it all.

Oscar de la Renta chief executive officer Alex Bolen and Erika Bearman only needed to show the “Sh*t @OscarPRGirl Says” video to show just how willing the designer is to take a chance.

Senior vice president of communications Bearman, who doubles as @OscarPRGirl, made the 90-second spoof with Lucky style editor John Jannuzzi and a few other fashion friends, all of whom met via Twitter.

Filmed one Sunday in New York and filled with fashion speak (i.e., “Oscar does the best greens,”) the video went viral, gaining 10,000 hits in the 12 hours after it was posted. Aside from giving viewers a few laughs, it also proved how the company doesn’t take itself so seriously and is willing to experiment.

“In my experience, it has been incredibly helpful to really inhabit these platforms we talk about every day — to be a member of the tribe I’m studying. We know our social media audience better because we’re part of it,” Bearman said. “If you’re really going to innovate, you can’t be afraid to fail.”

Earlier, Bolen mapped out a five-point strategy — be innovative, develop evangelists, eliminate middlemen, move first and sell more stuff. “When we think about our brand, if there is one word, it would be ‘innovative,’” he said.

Through the years, the company has made a habit of building brand awareness through word-of-mouth, whether that be through runway shows or talking to customers one-on-one at the fragrance counter. Not wanting to diminish how stores have a hand in all this, Bolen added, “I should protect my assets and say we love all of our retail-wholesale partners.”

As part of its plan to become more of a global brand, the company hopes to ship about $10 million this year in online orders, and the goal is to increase that figure substantially over the next three to five years, Bolen said. But maintaining perspective is an essential part of everything they do, he said. “Oscar likes to remind me that we sell dresses and we try to make people happy,” he said.