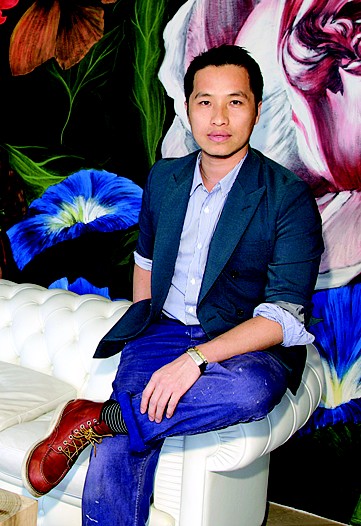 Phillip Lim is optimistic. “We’re not fearful of the economy,” he says, a bit zenlike considering the impact of the recession on his four-year-old line, 3.1 Phillip Lim. “Not everything is perfect, but in these times, it’s as perfect as it can be.”

Some strong numbers back up Lim’s positive attitude. Wholesale figures for 2008 totaled more than $40 million, according to Lim, with projections for 2009 upping that by 15 percent. “Phillip Lim is definitely a bright spot for us right now,” notes Linda Fargo, Bergdorf Goodman’s senior vice president, fashion office and store presentation. “All of us in the store are already anxious to shop the upcoming deliveries — that’s a good sign.” Meanwhile, sales in Asia grew by 40 percent this fall over fall 2008, and in Europe, 110 percent. In Italy alone, the line picked up 32 new retail accounts.

In Lim’s favor? The more-bang-for-your-buck mentality that has always characterized his collection. 3.1 Phillip Lim is priced in the contemporary area — albeit the higher end of it — which gives him an edge over the more costly labels targeting the same hip customer.

“It’s the designer sensibility that Phillip brings to the collection that makes it so desirable for customers,” says Ken Downing, senior vice president and fashion director of Neiman Marcus.” Wen Zhou, Lim’s business partner and company chief executive officer, notes that lately more and more designer stores are picking them up as their entry-level collection. For instance: Colette in Paris, which bought the line for the first time this year. “It’s important to be open to all kinds of customers,” remarks Sarah Lerfel, the store’s artistic director and buyer.

Hirshleifer’s at Americana Manhasset on Long Island is another case in point. “The clothes look a lot more expensive than they actually are,” says vice president Lori Hirshleifer Sills. “I’ve always been personally buying his collection for myself, but this is the first time that I really thought it would be right for us.” She adds that the line will be part of a new item-driven lifestyle shop-in-shop opening in July.

Lim and Zhou are keeping the momentum going on all fronts. They are expanding vigorously into new categories — shoes, lingerie and swim — and have a number of new retail ventures in the pipeline. In August, they will open a flagship store in Seoul and are in negotiations to launch others in Hong Kong (two, actually), Beijing and Shanghai in the next few years. “Right now,” says Lim, “it’s not about sitting back and letting things happen. It’s about taking a step forward and pushing the envelope.” Indeed. “Newness,” as Downing says, “is really imperative to the success of any collection as we go forward.”

Lim’s new swim lineup rolled out first, for the summer market. It’s a tight three-style collection — two maillots and a bikini in pretty patchwork floral prints, all to retail at $175. “Usually, swimwear is sleek or athletic,” says Lim. “We brought a girly, playful element to it.” His new intimates line is similarly sweet. There are five styles in various fabric and color combinations, with retail prices ranging from $65 to $175. Looks include slips with abstract pansy appliqués, mesh-trim bralettes and boyshorts with beaded embellishments. “We’ve named it 3.1 Phillip Lim Initials,” Lim says, “because it’s the initial thing you put on, before you put on clothes.” He adds that he’s limiting distribution to his own shops for now (to debut May 20) before the official launch for spring 2010, when the collection will take on the wholesale market. “That’s the beauty of having our own stores,” he says. “Because all these categories — we can test them there first. That way, we take the responsibility of fine-tuning the fit, the look, the price points.”

The same goes for his new shoe line, which is also having a soft launch for fall. Lim is no stranger to the footwear market — he has done collaborations with Birkenstock and Nicholas Kirkwood in the past and has no plans to abandon his relationship with Christian Louboutin. (Their ruffled platforms from spring were such a hit that Topshop opened in New York with a $190 knock-off.) Rather, Lim’s new collection, priced from $290 to $675, is geared towards more practical environs, not the fashion circuit — a point Lim reinforces by noting that his more out-there Louboutin designs will continue to accessorize his runway. “Everyone’s making crazy shoes,” says Lim, “so we were like, ‘Let’s do working shoes, but sophisticated and beautiful.’” To that end, there’s a serious focus on flats and nary a stiletto; height comes courtesy of stacked heels and wedges. Styles range from double-buckle monk shoes to pointed-toe jazz flats and giraffe-skin booties. The men’s collection features two high-top sneaker styles, one lined in shearling. “This is the moment to refine and redefine creativity on all levels,” he remarks.

Still, Lim has always balked at the “lifestyle” tag. But things are changing for the 35-year-old designer. As for branching into still other arenas, he hints that a collaboration with Cartier (he sits on the host committee for its centennial celebrations) may be in the works. “You realize you’re growing up,” he says. “We’re intentionally evolving the fashion label into a lifestyle brand now. It’s freshman year moving into the sophomore year.”

Is it too much, given the economy? Not at all, according to the ever-upbeat Lim. “It’s about survival,” he says. “In the end, there are two ways to go: either the victim or the victor. And I think that’s healthy, because it pushes everyone to the next level.”