The complex, which is located midway between Beijing and Tianjin, includes Prada, Giorgio Armani, Versace and Salvatore Ferragamo. 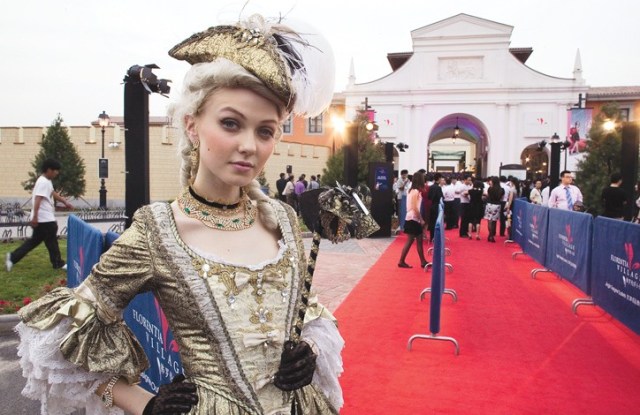 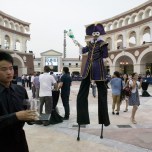 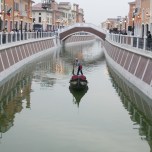 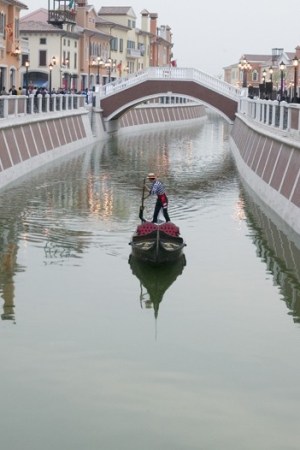 Wuqing, China — Amid the rolling green farmland that stretches out in between China’s capital and one of its largest cities, a replica of a 16th century Italian town has taken shape among the fields.

The airy complex is incorporates Italian-styled tiles, wood ornaments and furniture, with no detail left to chance. In the middle of the development is a spacious, over-the-top replica of the Coliseum. Toward the back, a gondolier steers his imported Italian boat down a quiet and picturesque canal as shoppers and onlookers stop to watch.

Welcome to the lavish new world of luxury outlet mall shopping in China.

This is Florentia Village-Jingjin Designer Outlets, a high-end development created through a partnership between Italy’s Fingen Group and the Waitex Group of the United States. The outlet mall opened this month midway between Beijing and Tianjin, at a prime spot on the high-speed rail line, where it will feature outlet shops for some of the world’s leading luxury brands. More than three-dozen brands including Prada, Giorgio Armani, Versace, Salvatore Ferragamo, Fendi, Bulgari and Coach are present in the complex, which opened last month. Eventually the mall will include outlet shops for more than 100 brands, as well as restaurants and drinking establishments, according to management. A bit out of keeping with the mall’s Italian theme, KFC is already in business.

“We chose to launch our first China outlet under the brand name Florentia Village in Wuqing because of its potential to attract a new generation of stylish Chinese consumers with fast growing disposable income in the luxury sector,” Ivano Poma, chairman and CEO of Florentia Village and managing director of RDM Asia, said in a release about the opening. “We are excited to bring many famous Italian brands into an outlet center in China for the first time with guaranteed affordable prices year round.”

“Our aim is to establish Florentia Village as a retail landmark for design, fashion and business success in China, by offering an authentic Italian outlet experience and unparalleled world-class management,” Poma added.

While the complex is big, lavish and unusual, amassing retail outlets of world-class luxury brands into one single space its nothing new for China, where luxury malls abound. The real difference here for Chinese shoppers will be the price.

Developers say prices at Florentia Village will be reduced by 40-70 percent from traditional retail outlets in other shopping areas in China. In a country with fast-rising inflation and some of the world’s highest clothing prices, that’s no small incentive to take the train 17 minutes out of Beijing to go shopping.

Just a few years ago, the mall might have seemed like a strange endeavor. But China’s retail scene has exploded in the past five years and outlet malls are among the most popular new growth developments.

“It’s worth coming here on weekends to shop even if I only find a 20 percent discount,” said Lu Tianyi, a 24-year-old browsing at the Coach store in one of Beijing’s newer outlet malls on a recent Sunday afternoon.

Yet in China, the title outlet mall rarely means guaranteed discounts. Hu Weibo, a retail industry analyst with CITIC Securities in Beijing, said the country now has about 200 complexes calling themselves outlet malls. The numbers are somewhat deceptive as only about 10 percent meet the international definition, which demands a certain caliber of brand and lower-than-normal prices.

“There are many outlet malls which are not qualified; I call them ‘fake outlets,’” said Zhu Bin, a retail industry analyst with Guosen Securities in Shanghai. “I have been in some stores on the street which also call themselves outlets, even though they have only two floors and most the products they sell are middle- and low-end brands.”

Fake outlets aside, the number of real outlet malls in China is expected to increase by 15-20 percent in the next few years, according to analysts.

The burgeoning growth in outlet malls that do offer deep discounts like Florentia Village are becoming a major draw, analysts and store clerks say. Retail spaces that were empty at the start have given drawn larger crowds and even long lines as it becomes clear they are, in fact, selling at lower prices. Cost is such a deep concern for Chinese shoppers that thousands flock to Hong Kong, Tokyo and other retail destinations to save on their purchases. Time will now tell how many consumers are willing to travel to the middle of fields and farms for Prada and Armani.