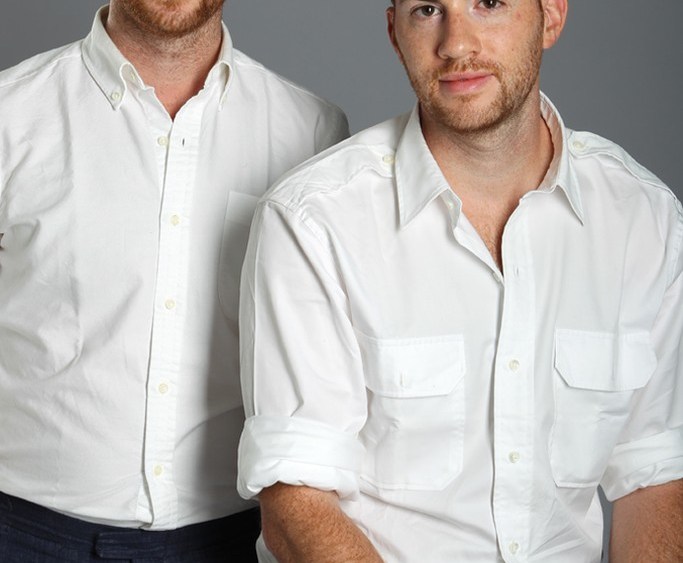 In the summer of 2009, twin brothers Shimon and Ariel Ovadia ducked into the Double RL store in East Hampton, N.Y. to escape a thunderstorm. Inside, the duo encountered their longtime hero, Ralph Lauren, who was there with his wife, Ricky, and brother, Jerry. The chance meeting, which led to an almost hour-long chat with the designer, would be a pivotal moment in the brothers’ lives.

“Some kids grow up idolizing movie stars or athletes. We grew up idolizing Ralph Lauren,” remembered Shimon Ovadia, who is seven minutes older than his brother. “The idea of launching our own line had been brewing for a while, but it was meeting Ralph that really put the match to the fire. We told him our whole life story and he said, ‘If you want one piece of advice, do what you love and do what you believe in.’”

The Ovadia brothers, 28, took that advice to heart and this past spring introduced their first collection under the Ovadia & Sons label. The extensive lineup launched ambitiously with a wide range of categories, including suits, outerwear, shirting, sportswear, neckwear, accessories, formalwear and even shoes. The label is a modern take on the classic English and American wardrobe, with a whiff of Italian flair thrown in. The overall effect is rather understated when looking at a particular garment but dashingly sophisticated and luxe when pulled together into a complete look.

“We don’t want to reinvent the wheel. We focus on a few things: the quality of fabrics, the quality of make and a slimmer silhouette, although nothing drastic,” explained Ariel Ovadia.

For the first season, the Ovadia brothers limited distribution to their own e-commerce site and their by-appointment showroom near Union Square at 37 W. 15th Street. This fall, the line will be wholesaled for the first time to the directional CHCM boutique on Bond Street in New York, in addition to an Ovadia corner, which will open at Bloomingdale’s in New York at the end of this month.

“It will have a prominent wall in the designer area, right across from Marc Jacobs and around the corner from Ralph Lauren,” noted Kevin Harter, vice-president of men’s fashion direction at Bloomingdale’s. “I instantly fell in love with the collection when I saw it. They know their craft. It’s got great fabrics and it’s modern but still goes back to a heritage feel.”

For next spring, Barneys New York has picked up the line as well. “It’s wonderful how natty and debonair their taste is for two young guys,” said Tom Kalenderian, executive vice president and general merchandise manager for men’s at Barneys New York. “They represent the essence of what is exciting about the men’s business today.”

For spring 2012, the Ovadia & Sons collection includes a water-resistant motorcycle jacket in yellow nylon for $1,095 and a sleek, black calfskin flight jacket for $985. Suits come in timeless styles with trim fits, such as navy wool windowpane, navy wool chalk stripe, beige gabardine or tropical-weight wool double-breasted in pearl gray. Prices range from $1,950 to $2,695 for a double-breasted, shawl collar tuxedo in mohair.

Shirts come with English cutaway or club collars, ranging from $185 to $285, with a tuxedo shirt with bib collar priced at $345. Sporty cotton sweaters with red or white nautical stripes are $230, while a cashmere pullover in a camel and brown houndstooth pattern is $645.

Ties in solids, stripes and underknots come in silk knits, wool gabardine or crisp cotton and are priced from $95 to $125.

The brothers searched extensively for best-in-class factories to produce each category. The suits are manufactured by Martin Greenfield in Brooklyn, the shoes are made in Northampton, England, the shirts in New Jersey and knitwear in Scotland and Madagascar.

The Ovadia brothers grew up in the rag trade — but from about as far away from their own personal aesthetic as you can get. The twins — along with an older brother, Avi, who helps with the business end of Ovadia & Sons but stays behind the scenes — worked as teenagers for their father’s business, a children’s wear distribution company that dealt in closeout merchandise.

It wasn’t glamorous but today that company, Magic Kids Inc., does more than $10 million a year in sales and operates four warehouses in New York, New Jersey and California. The company, based in Manhattan, distributes its own line of toddler’s apparel, called Cotton Candy, to mass retailers like Wal-Mart, J.C. Penney and Burlington Coat Factory, as well as distributing children’s apparel with licensed insignia from the NFL, NBA and college teams.

Even as youngsters, the Ovadia brothers were drawn to classic men’s style and spent their work earnings on Ralph Lauren, vintage clothes and iconic designs like Levi’s jeans. “We had a little group of friends and we would dress up and talk about clothing and shoes,” recalled Shimon Ovadia. “Even then we loved the classic things. Some people spent money on video games, we spent it on clothes. But we were lucky — we both wore the same size and could share things. Although some things were strictly off-limits to each of us.”

Neither of the Ovadia brothers attended college or design school, choosing instead to go into the family business right out of high school. “We went to the school of life. And you can’t pay for that kind of education,” said Shimon Ovadia.