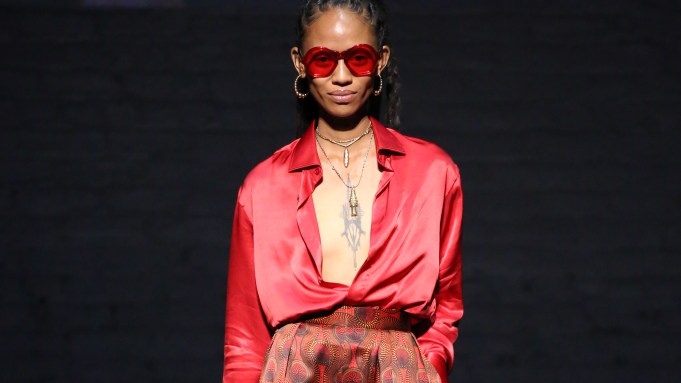 Sunday night was showtime at New York’s Apollo Theater for Ozwald Boateng, who staged a women’s and men’s runway show with an all-star crowd.

Designed to celebrate culture, diversity, music, history and fashion and to mark the 100th anniversary of the Harlem Renaissance, Boateng partnered with the Harlem 100 Committee for the night and used the occasion to launch his women’s couture collection and see-now-buy-now styles.

Backstage before the show, Boateng said a lot of the guests were friends he has remained close with for years. “I almost feel as though it’s for them as well somehow. I feel the cultural relevance for Harlem. I’ve invited the community to the show. I’m just saying, “Look, come enjoy, have fun with me.’ Let’s celebrate this time in history,” Boateng said.

Before the 60-model show got under way, the Harlem Orchestra played from three tiers for the crowd below. Noncelebrities also caught every last turn, since Boateng invited locals as well as LIM students. The night started with a short film continuing the designer’s narrative of Africanism and edging into his view of the future of AI — or “authentic identity.” “The idea of what is real” is an undercurrent in his design process, he said.

After visiting the Apollo for the first time three or four weeks ago, Boateng said he was immediately struck by the building’s “incredible spirit, because so many talented people have started their dream here.” One sign of its lore is the tree stump displayed on the stage that was part of the “Tree of Hope,” which stood for years a few blocks away. Artists and musicians would stand under the tree waiting for promoters and managers in search of new talent.

“It was really an opportunity for young artists to basically get a break. Any time there is a performance you’re supposed to rub it and it is supposed to bring you the luck and the energy of all the artists who have been in this space. It’s a very deeply powerful thing,” Boateng said. “When I heard that story and felt the energy in this space, I said this has got to be the place where I introduce my women’s collection and my clothes to America really. I’ve been designing here for 30 years plus, but this really feels like the first time I’m showing.”

His partnership with British Airways, which tapped him last fall to redesign its staffers’ uniforms, helped to get him there — physically and financially. The social media app Vero also helped out. The collection featured sharp-cut suits from the Savile Row standout, as well as silk shirts, a scoop-back dress, scarves, shawls, oversize coats with leather belts, zip-front jackets and other interchangeable designs. African-inspired textiles and prints were used in styles for women and men.

In the wake of racially charged controversies involving big brands like Gucci, Prada and Burberry, as well as the world at large, Boateng’s show packed a particular punch for the fashion industry. Improving diversity on runways and in companies is an ongoing fight. As a London-based designer of Ghanaian descent showing in New York City’s urban epicenter, Boateng said of these polarizing times, “The thing about creativity, at least for me, is I don’t design without purpose. There is always a why behind my creativity. That’s why I chose the Harlem Apollo, because of its huge history of African American culture and the birthplace of such artistry that is very, very powerful.”

During the hour-plus wait for the lights to go down, many of the front row guests caught up with friends. Despite having time to burn, some like Bizzarri and Enninful waved off interviews. Given the event’s unifying purpose, the night-off excuse in the name of friendship seemed a little weak. Dapper Dan, who was by Bizzarri’s side, was game, though. “This is historical tonight. We have three black men who are leading design companies now — myself, Boateng, Virgil Abloh,” said Dan, noting the irony that all three men have ties to Ghana.

Asked about what is needed to bring people together after the division in recent months, Dan said, “I think Gucci did an excellent job with the Changemakers. We’re ushering in a new moment in fashion, and I think Gucci is leading the way. Without question, I would not be here involved with Gucci, if my heart wasn’t totally relaxed with the changes they are making. I think history is going to tell a bigger story about what we’re seeing now.”

His personal history will be spelled out when he returns to the Apollo for a book signing for “Dapper Dan: Made in Harlem.” In addition to the Random House book, Sony Pictures is developing a film about his life.

Boateng also addressed his personal history. “My roots have been in the U.K. brought up as a European black kid. With my clothes, I kind of feel that I am bridging all those points,” he said. “The collection is called AI, which basically means your authentic identity. Now it’s important to be true to who you are. I like the honesty and truth to that. That’s the base of the collection.”

The designer will be making a donation to the Harlem Renaissance 100, a community-wide celebration that unites 13 Harlem cultural institutions and marks the 100th anniversary of the Harlem Renaissance. Boateng planned to add his name to the Apollo’s wall of signatures after the show, but he doesn’t expect to be a one-hit-wonder in New York. “I’m here — I want to do more, more, more. Let’s see what happens. There are definitely people who I have met here who I feel like we could do things with being very open and quite creative bringing in different energies. It’s exciting.”

Elba’s wife, Sabrina Dhowre, was on board with the designer’s purposefulness. Asked what Boateng’s show meant in these divided times, she said, “I think it is just a testament to what fashion’s been about — embracing different people. Ozwald is someone who cares so much about the people that he dresses. We know him personally as a friend, and I think the show is going to be amazing. Right now we’re here to celebrate him and his achievements and coming to Harlem, so we’re excited about him.”

As for what the best part about being married is (10 days post-wedding in Morocco), she said, “Him,” motioning toward Elba, who added, “The future.”

Boateng capped off his show with a surprise performance by John Holiday, which got the crowd on its feet. The designer then sailed across the stage in a green suit for a final bow and leaned across the stage to shake hands with Bizzari before exiting into the wings. While guests filed through the rows of red velvet-covered seats, a spotlight shone on Foxx clapping and enjoying the postshow buzz in the mezzanine. Pyer Moss designer Jean-Raymond had kept more of a low profile, sitting quietly on his own.

Afterward, Jean-Raymond gave the location and the show good grades. As for why he wanted to be there, he said, “I root for everybody black.”