The Puig-owned brand is plotting more rapid growth and eyeing additional boutiques in London and the U.S. 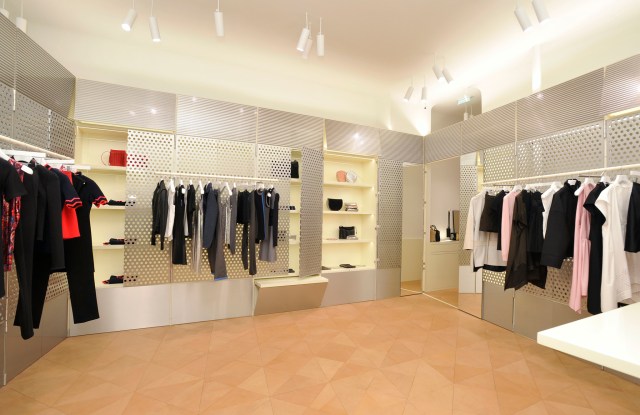 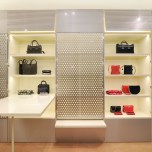 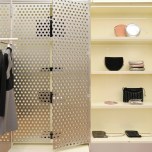 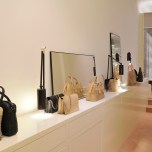 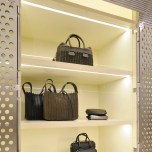 PARIS — Returning to the retail scene after a 14-year absence, Paco Rabanne will this week unveil a 750-square-foot unit at 12 Rue Cambon, its perforated metal walls a wink to the founder’s famous “unwearable dresses” of the Space Age Sixties.

It’s a big step for the Puig-owned fashion house, which aims to open a second boutique in London later this year, and already has its sights set on a unit in America, likely in Los Angeles.

Wednesday’s opening also comes in tandem with an online store integrated with the Cambon site, plus a new visual identity and communication effort spanning an overhauled Web site, subtly tweaked logos and typefaces, new packaging and the first ad campaign since the 2013 arrival of Julien Dossena as creative director for women’s wear.

The disquieting images — reminiscent of Thomas Demand artworks and destined for outdoor placements in Paris, niche magazines and Vogue sites in France and America – depict imaginary rooms of the Rabanne customer. These synthetic scenes come complete with silvery Paco milk cartons and popcorn bags, retro light fixtures and appliances and clothes draped over metal discs and tables instead of on models.

In an exclusive interview, Dossena and fashion general manager Anouck Duranteau-Loeper described how the Cambon store culminates several years of collection development, and positions the company on a faster growth track.

Revenues, which hover around five million euros, or $5.4 million at current exchange, are forecast to double over the next 12 to 18 months, with the Cambon boutique contributing about one million, or $1.1 million, according to Duranteau-Loeper, who was recruited from Céline to revitalize the fashion house.

“It was important to have a retail store because then you learn more about your customer,” she said. “Also, it’s very important when you relaunch a brand that the assortment is representative of the designer’s vision.”

Fueled by Dossena’s exacting, youthful and athletic-tinged designs, Rabanne has bulked up its wholesale business to about 70 doors, so far concentrated in the U.S., the U.K. and Italy, including a partnership with Barneys New York across 12 doors that was a precursor to the boutique project.

Duranteau-Loeper noted that the online store would debut with shipments to Europe and the U.K., with North American clients directed to Barneys’ Web site, and Farfetch.com slated to cover the rest of the world.

She expects the Paris boutique, a stone’s throw from the bustling and buzzy Rue Saint Honoré, to attract a clientele that’s half tourists and half locals. The Maria Luisa shop within the Printemps flagship on Boulevard Haussmann is Rabanne’s only wholesale showcase in the French capital.

The plan is to have three to four stores open over the next two or three years, she noted.

To realize a Paris boutique he described as balanced between “radical and luxurious, dry and comfortable,” Dossena turned to Belgian architects Kersten Geers and David Van Severen of Office, billing it as their first fashion project.

Luxury touches include leather floors in a patchwork of lozenge shapes, panels of yellow lacquer with a Thirties mien, and “comfortable lighting” that streams through the porous metal.

“It’s this mix of elements that gives the shop this radical balance,” mused Dossena, a design alum of Balenciaga under Nicolas Ghesquière. “At the same time, we wanted to keep these industrial touches — and I mean industrial in the most noble sense.”

He noted future units would also be of a similarly intimate scale.

“We didn’t want a temple of 3,000 square feet in marble to be the image of the brand,” he said, summing up his concept thus: “It’s as if you put a metallic room in another room.”

He noted that the modular concept also suits today’s frenetic pace of collections, allowing the shop to change along with deliveries. Ready-to-wear represents about 60 percent of the Rabanne business; the balance comprising leather goods, footwear and jewelry.

Dossena commissioned perfumer Dominique Ropion to concoct an ambient fragrance, while a soothing soundtrack of ambient hum and tweeting birds to complete the sensorial retail experience.

The brand’s hit fragrances, including Invictus and 1 Million, plus the Black XS range, won’t be sold at the Cambon location, though the new Web site offers a portal to perfume, a step toward bringing the fashion and beauty universes into closer orbit.

The campaign, shot by Dutch duo Maurice Scheltens and Liesbeth Abbenes, is to run in such niche titles as Purple, Pop, Double, System and Self Service, with more traditional fashion shots to follow.

“We didn’t want to start with fashion images and a model because there’s so much fashion imagery around,” Dossena said, describing an unexpected tumble of images to come.

Rabanne plans to host a dinner on Jan.25 and a cocktail party on Jan. 26 during couture week in Paris to christen the boutique, online store and revamped identity.