Developed by Francesco Ragazzi in collaboration with Angela Missoni, the collection will be on sale starting from June 30.

MILAN — “I’ve always wanted to do a collaboration with him, but I was waiting for him to ask me,” said Angela Missoni, discussing the Missoni partnership with Palm Angels and its founder and creative director Francesco Ragazzi. The two fashion labels teamed on a co-branded men’s and women’s collection that will hit stores on June 30.

Consisting of a full lineup of 150 pieces, the collection will be sold at the brands’ online stores and physical shops, but also through a retail network of around 60 high-end boutiques and department stores worldwide.

Missoni and Ragazzi are no strangers since they are part of an extended family. Ragazzi is, in fact, the nephew of Bruno Ragazzi, Missoni’s longtime partner.

“When I was young, I wanted to become a fashion photographer and Angela was the first to bring me on the set giving me the opportunity to learn the skills [that] became so important in my career as art director for Moncler,” said Ragazzi, who established the Palm Angels fashion line in 2015 following the publication the previous year of a photographic book collecting images of skateboarders he shot in Venice. Palm Angels is under the umbrella of New Guards Group, the Italian fashion group controlled by Farfetch.

Ragazzi admitted that the idea of doing a collaboration with Missoni was something that had been crossing his mind for a while, but that he wanted to find the right moment to do it. “Before, Palm Angels was too small to have the ambition of working with Missoni, but now I think we are ready for this type of high-profile collaboration,” the designer said, adding that the project “took shape over a cup of coffee with Angela.”

In order to develop the collaboration, Missoni opened the company’s archives to Ragazzi, who had the chance to deep dive into the brand’s kaleidoscopic world of colors, patterns and textures. 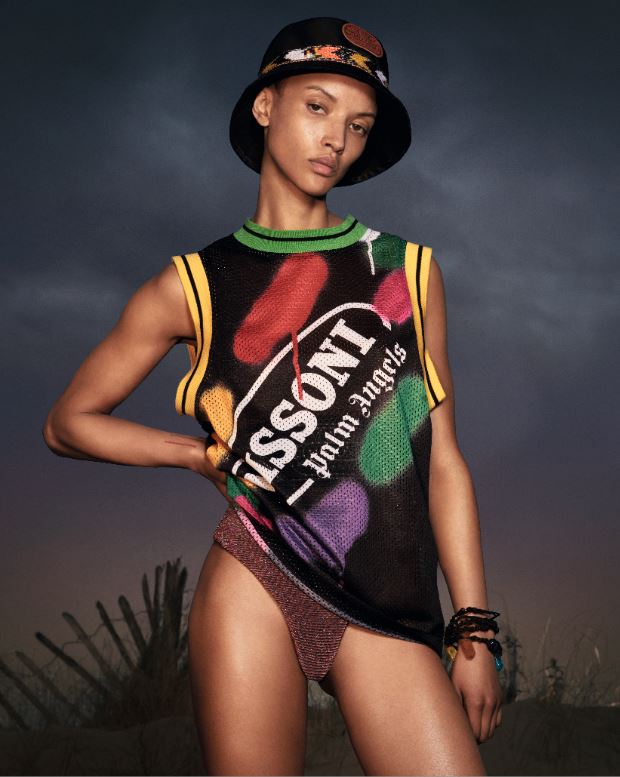 “It has been super exciting,” Ragazzi said. “The Missoni archives have been the starting point, but then I had the chance to break free and combine the world of Missoni with the world of Palm Angels into something new that speaks the language of both brands.”

“I really appreciate the fact that Francesco found so much inspiration in our world and that he thinks that our established brand has still a lot to say, also to the new generations,” Missoni said. “I’ve always believed that this is the path that needs to be walked in order to approach new generations, without losing our identity, our DNA, our iconic style. I think that one of the secrets behind Missoni’s longevity is the fact that it’s trans-generational and nowadays that’s something more important than ever since what really matters now is not your age, but your mentality.”

Strongly inspired by the Missoni fall 2018 collection, where Angela Missoni looked to the positive, happy vibe of New York City in the late ’70s/early ’80s, the collection is injected with Palm Angels’ signature urban, relaxed and cool vibe.

A co-branded logo was created starting from an oval Missoni logo dating back to the ’70s. “It comes from one of the first collaborations developed by Missoni with Emmanuelle Khanh,” said Ragazzi, who first saw it in an archival image splashed on the back of a top worn by a model lensed on Milan’s Via Manzoni at night.

The lineup will be promoted through images shot by David Sims that will also be featured on billboards in Miami, where Palm Angels is opening a boutique next week. 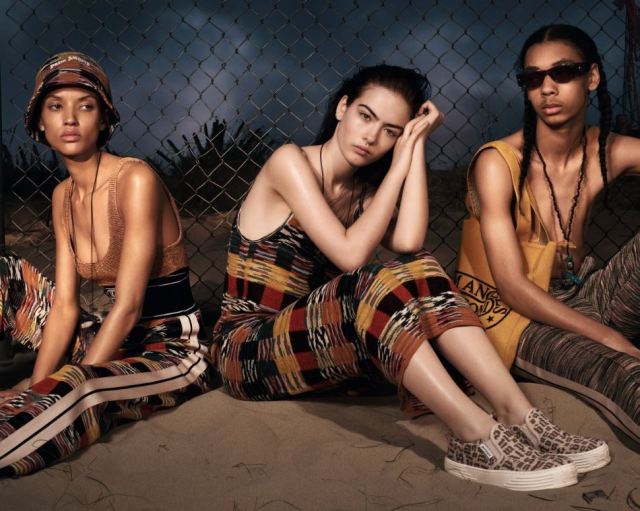 The launch of the collection reflects Missoni’s current strategy aimed at revamping the brand’s image and offering to make it more appealing to younger generations. Earlier this month, the label unveiled the launch of a sustainable sneaker range developed in collaboration with Milan-based footwear start-up ACBC — the acronym stands for Anything Can Be Changed — that is a specialist in the production of eco-friendly shoes.

As reported, Missoni has revealed that longtime creative director Angela Missoni, the daughter of founders Ottavio and Rosita Missoni, was stepping down from her role, while remaining as president of the fashion house. She was succeeded at the helm of the women’s line by her right arm, Alberto Caliri, who made his debut as creative director with the resort 2022 collection. The men’s line, which was previously designed by Angela Missoni, is now creatively led by a design team. As part of the reorganization strategy, Missoni collections are now distributed across Italy, France, Benelux, Germany, Austria, Switzerland and Russia by the Italian showroom Brama Group.