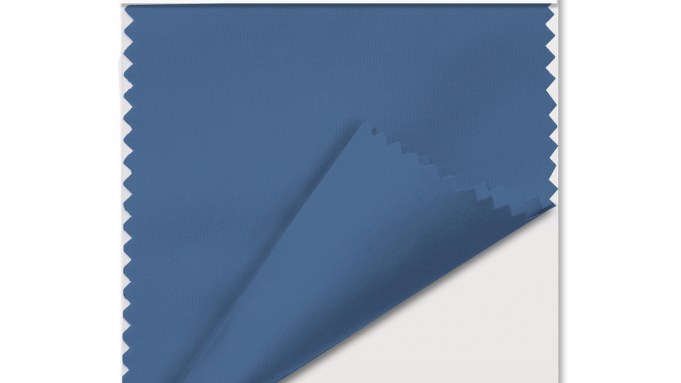 The richer shade of Riverside and the more self-explanatory Airy Blue rank first and second, with Sharkskin, an emboldened gray that also lives up to its name, takes the third spot. Building on the soothing colors that surfaced in the spring Pantone palette, the fall forecast also leans toward more muted ones that are meant to create a transporting and transformative canvas, according to Leatrice Eiseman, executive director of the Pantone Color Institute.

She singled out such “modern-day stresses” as near round-the-clock presidential coverage, the ever-present demands of living tethered to smartphones, financial uncertainty and job insecurity. Eiseman explained, “With all the angst that’s out there in the ether and in the world around us, there is a need for more calming colors.”

Finishing respectively fourth through sixth are Aurora Red, Warm Taupe and Dusty Cedar. The latter part of the list — seventh through 10th — are made up of Lush Meadow, Spicy Mustard, Potter’s Clay and Bodacious.

These additions up Pantone’s color library to 2,310 shades at a time when Instagram and Snapchat are helping to expose people to a wider range of colors. Eiseman said, “The more that people see involving color, the more fascinated they become by it. Seeing how others wear or use color enables people to see color outside their own sphere. It helps to get the creative juices flowing and it’s literally right at their fingertips.”

Aware that many consumers have cut their spending on apparel and are still holding back from shopping even though their own financial concerns have lessened, Pantone has introduced six new colors for fall. Riverside, Airy Blue, Sharkskin, Lush Meadow, Spicy Mustard and Bodacious are meant to drum up interest among consumers.

“We’re also into heavy-duty campaigning in this election year. We are hearing a lot from presidential candidates every day and there are a lot of excited opinions. In addition to that, a lot of people have gotten into the habit of not spending and there is a comfort level in seeking out what’s familiar,” Eiseman said. “If people get in the habit of doing the same old, same old, you have to give them something interesting and reason to change.”

For the second consecutive season, Pantone has one color forecast for both women and men — another sign of the gender blurring and growing popularity of unisex dressing that have taken hold over the last few years.

“It’s almost as though its time has come. There has been such an erosion between the sexes. Fashion doesn’t have to be male or female. This whole idea is reflected in the relevance of colors in that men are feeling more comfortable in nontraditional colors and women are more open to what used to be masculine colors,” Eiseman said.

Here, analysis of the Top Ten shades of fall:

This constellation-like blue may have gotten a boost from interest in Elon Musk’s SpaceX project and Matt Damon’s Academy Award-nominated role in “The Martian,” but its everyday versatility is what really makes it a winner. “To the average person, this might be just another shade of blue, but designers recognize its nuances. This color says ‘repose’ and ‘calmness.’ It’s not as serious as navy or as bright as cobalt,” Eiseman said. “It has a practicality aspect that makes people feel as though it is just like pulling a pair of jeans from their closet. They are thinking of how many things they can wear this blue with.”

In a time laden with political conflicts and economic uncertainty, Airy Blue offers designers a touch of airiness and weightlessness. Cam Newton and the rest of the Carolina Panthers aren’t the only ones who are partial to this skyline shade. Karl Lagerfeld showed glimpses of a blue sky at last month’s Chanel show in Paris. “Designers really like the serenity and versatility associated with Airy Blue and it can be worn throughout the year. It’s fall’s answer to a lighter blue.”

Thom Browne and Ralph Lauren took to this dependable gray long ago, but now the rest of the fashion pack sees its value. Blogger Mary Seng’s Happily Grey is devoted solely to the color. And Mark Zuckerberg’s gray hoodie-wearing ways provided the inspiration for Uri Minkoff’s debut collection while an increasing number of ath-leisure-minded labels have made this men’s wear-friendly hue one for the masses. Zayn Malik and other Millennials’ new-found fondness for the gray-haired look is only furthering the trend. Eiseman added, “Sharkskin is still a concept of gray but it can be used a very stable way. It is a color that you can literally and theoretically rest on its neutrality, as in a tombstone. And as its name implies, it is meant to help people toughen up” in these trying times.

This unexpected red was the color of choice for Lady Gaga’s Gucci pantsuit during her Super Bowl performance of “The Star-Spangled Banner.” The fact it can also be found on Rihanna’s “Anti” album and in Deadpool’s aerodynamic costume only further illustrates the ongoing mash-up of cultural trends. Eiseman said, “This one really gets the adrenaline pumping. You used to only see Aurora Red in a store window, on a grommet for added accent or on a Web site homepage specifically for graphics,” but now designers are using it more in apparel to attract the consumers’ eye. Eiseman said, “If you don’t use some vibrant colors, you bore them.”

Yeezy’s second collection was rooted in this neutral, but this fall’s Warm Taupe is meant to be more embracing. Eiseman said it is so tactile that you want to reach out and touch it to get a feeling of warmth. Ivanka Trump and Sienna Miller sported similar-colored coats last fall and Chloé’s hooded version was a sell-out on Net-a-porter. Warm taupe will be back this fall in abundance in jackets and other outerwear, according to Eiseman.

With rose undertones and seasonless appeal, Dusty Cedar nods to Pantone’s co-Color of the Year, Rose Quartz. A ruddier pink than most, this color has a complexity that makes it fitting for fall and winter. Men’s wear labels such as Thomas Pink have taken to it beyond neckties and sole stripes in shoes. “It’s not one of the obvious colors — it’s the offshoot of a lovely adaptation of a color,” Eiseman said.

Effective on several fronts, first and foremost this Leaves of Grass green is meant to be transpondent in that wearers will feel as though they are bringing the outdoors indoors. Too much office time and not enough free time isn’t the only reason this vibrant green resonates. Fifty-four years after Rachel Carson’s “Silent Spring” first hit book stores, consumers now see environmentalism as a way of life, not just reading material, Eiseman said. Evocative of botanicals and foliage, Lush Meadow speaks to fashion’s increased commitment to sustainability, organic cottons and acknowledgement of many shoppers’ green lifestyle, Eiseman said.

First Lady Michelle Obama helped to get people talking about this color after choosing a variation of it for the sleeveless dress she wore at last month’s State of the Union address. Political pundits, fashion critics and voters alike weighed in online. Building on the interest in yellows in recent seasons, Spicy Mustard has a depth to it that makes it more exotic than dandelion, Eiseman said. FLOTUS’ Narciso Rodgriguez $2,095 frock was a sellout for the designer. “Mistress America” actress Lola Kirke also went with a Gulden’s-like hue for her Monique Lhuillier gown at this year’s Golden Globes. Like all of the Top 10 for fall, Spicy Mustard can be paired on an everyday basis with Riverside or Sharkskin, Eiseman said.

Consumers have grown to expect this earthy shade, which has a real substance to it, adding a degree of sophistication and inherent layering, Eiseman said. “This seems akin to orange, but not a lollipop orange. Potter’s Clay is a lot more subtle, grounded and rooted,” she said.

No longer just used for piping on ski jackets or in argyle socks, this bold color is becoming more prevalent in apparel for women and men alike. And the myriad of images of David Bowie from his Ziggy Stardust days that appeared online following his death has only furthered the trend. “Bodacious gives designers the opportunity to play with color, ” Eiseman said. “It speaks to the gender fluidity we continue to see with designers’ use of color.”