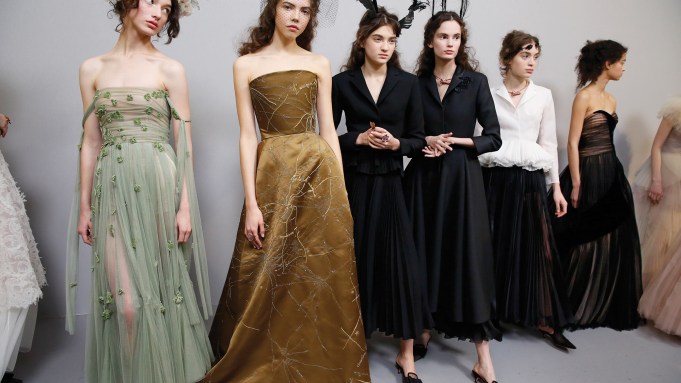 PARIS — Paris Couture Week kicks off Sunday with an extra day of shows on the schedule, signaling that the City of Light is regaining its luster following a year marred by the aftershocks of terrorist attacks.

Proenza Schouler, Rodarte, Azzaro, A.F. Vandevorst and Ronald van der Kemp will all show on the first day, which also features a busy schedule of parties, including the opening of Maison Chloé, the French house’s new exhibition space, and events hosted by jewelers Chaumet, Chopard and Tasaki.

Iris van Herpen will celebrate its 10th anniversary on Monday with a party and new collaboration with Swarovski on crystals for clothes and accessories. Stéphane Rolland is also marking a decade in couture with an event at Opéra Bastille. Azzedine Alaïa, meanwhile, will be back on the couture schedule for the first time in six years.

The major event of the season will be the opening of “Christian Dior, Couturier du Rêve” (“Christian Dior, Dream Couturier” in English) at Les Arts Décoratifs, marking the 70th anniversary of the house. The Paris museum is billing the retrospective as its largest fashion exhibition to date in terms of size.

Dior is hosting a party at the museum on Monday following creative director Maria Grazia Chiuri’s show earlier in the day. In parallel, it is presenting Victoire de Castellane’s high jewelry collection, inspired by the gardens of the Palace of Versailles, in a labyrinth installation at its Avenue Montaigne headquarters.

“It’s great this is happening at a time when energy levels in Paris are high, for a number of reasons,” said Toledano. He noted the return of tourists in the first half of the year and the election of French President Emmanuel Macron in May had contributed to a renewed mood of optimism in the French capital.

“There is a kind of renewal in politics, and young people want to get behind it,” he said. “There’s no guarantee it will work, but it has generated a positive effect, a sense of confidence. So it feels like the start-up spirit has spread everywhere — even to the old houses.”

Dior recorded a double-digit increase in couture sales last season and its seamstresses are working on the new collection in its recently renovated atelier on Avenue Montaigne, which has doubled in surface area. Most other couture houses also reported an upswing in the business of making made-to-measure clothes.

Sales at Chanel were up in the double digits, both in terms of the number of pieces ordered and the number of customers, said Bruno Pavlovsky, president of fashion at Chanel.

“More and more women are seeking the unique experience that couture represents,” he said. “We’re not talking about huge numbers, but there is no comparison with three or five years ago. What we are seeing now is really an acceleration of this growth.”

He saw the addition of an extra day on the schedule as a positive sign, even if it implies a logistical effort. “This is very good news for Paris. It’s a little difficult for everyone, but at the same time, this dense, rich and diverse schedule is part of what makes Paris strong today,” he said.

Chanel has pulled out the stops in the last year to bring high-spending visitors back to Paris, staging six shows in a row in the French capital, although it plans to present its fall couture collection in New York, London, Dubai, Hong Kong and Tokyo from September.

“Today, the work that has been done in the past is starting to bear fruit,” said Pavlovsky. “Paris has established itself as an influential city for luxury, for fashion, but also for culture.”

Sophie Waintraub, general manager of Jean Paul Gaultier, said orders have reached record levels, with increases of more than 20 percent in each of the last two seasons. The brand has seen a return of Eastern European customers, who have been scarce since the collapse of the Russian ruble in 2014.

“The first six months of the year have been excellent,” Waintraub reported, crediting the more favorable context, as well as Gaultier’s decision to exit ready-to-wear in 2014 to focus on couture and perfumes. The designer recently launched Scandal, his first new women’s fragrance in nine years.

“We are really seeing an improvement. People who may have felt scared are coming back,” said Waintraub.

“Because of Brexit, there is a sense that the place to be in coming years might be Paris. Our Middle Eastern customers all have a pied-à-terre in Paris and in London. Whereas in recent years they have been spending more time in London, they are now talking about coming to Paris more often. There is a reversal.”

The house also uses exhibitions as a means to expose the designer to a larger audience. Gaultier’s bridal creations are the subject of “Love Is Love: Wedding Bliss for All à la Jean Paul Gaultier,” which opened May 27 at the Montreal Museum of Fine Arts and may travel to other locations.

Schiaparelli, meanwhile, was the guest of honor at this year’s Hyères International Festival of Fashion and Photography, where creative director Bertrand Guyon was president of the fashion jury and staged the first exhibition of his designs.

“We are considering other installations, exhibitions and projects of that type,” said Delphine Bellini, deputy general manager of Schiaparelli. “The haute couture collection we showed in January was very successful, both in terms of media coverage and sales, so we are on a strong upward trajectory.”

Celebrities including Tilda Swinton, Kristin Scott Thomas and Melissa George wore Schiaparelli at this year’s Cannes Film Festival. Bellini was confident the house will maintain its momentum despite the recent departure of its ambassador, Farida Khelfa, to focus on personal projects, including film-making.

“Farida played a very important role because she relaunched the house,” she said. “Today, there is less of a need for this function.”

Giorgio Armani said although his Armani Privé couture division is performing “very positively” this season, the Paris show is only the start of the process, with private viewings of the collection planned in the United States and the Far East.

“It is essential that a wider public sees our collections, since not all clients travel to Paris. For this reason the collection has to be shown in other locations. As we have done in the past, we are organizing special presentations, on an invitation-only basis, of the collection that we are showing in Paris,” he said.

“Demand is continuing to grow and our atelier in Milan is constantly very busy,” Armani added. “The Middle East and Far East regions are the two markets where we are having our best results. We are also seeing a certain upswing in the American market.”

Olivier Lapidus has come up with an original solution for those unable to make the trip to France. The former head of the Ted Lapidus label, founded by his father, is striking out on his own with the launch on Saturday of what he is billing as the world’s first web-based couture house.

Customers can watch a runway show online featuring a see-now-buy-now option for each piece. Through a hotline available in 11 languages, they can book an appointment to be measured by a local team of seamstresses and then follow, via web clips, the entire creation process of each piece.

“If fashion is theater, in particular couture, then Internet is cinema,” said Lapidus, who has more than 11 patents for innovations including fabric made with fiber optics.

“I want to show how métiers d’art can be a part of innovation,” he added. “We’ll be sending out one-minute digests, because beyond that you lose attention. You have to create an emotion so that the new customer can absorb the information at today’s pace.”

While couture executives all insist that technology can’t alter the time it takes to make a dress, they are not immune to the impact of social media. Stefano Sassi, ceo of Valentino, said the house is rethinking its approach to the craft.

“Over recent years, we experienced significant growth, mainly driven by new countries — Russia, Asia or China, Brazil and so on,” he said. “This season, we’re not growing, but we are consolidating at a level of performance that I think is good.”

While he declined to elaborate on the planned changes, Sassi noted that creative director Pierpaolo Piccioli has evolved the label’s ready-to-wear collections for women and men since Chiuri, his former design partner, left for Dior last year.

“Haute couture is affected by this evolution of the world in terms of acceleration of trends and so on related to the social networks, related to this huge flow of digital communication, meaning that everything is now very quick and the trends are shorter,” he commented. “Therefore, we are thinking of making haute couture evolve to something different in terms of approach, style and so on.”

Nonetheless, Sassi believes personalized service remains at the heart of the couture experience. “To us, haute couture is a business, it’s a way to express ourselves. It has a very important strategic value so we are moving on and we are positive about the fact that haute couture is still a valid proposition for the market,” he said.