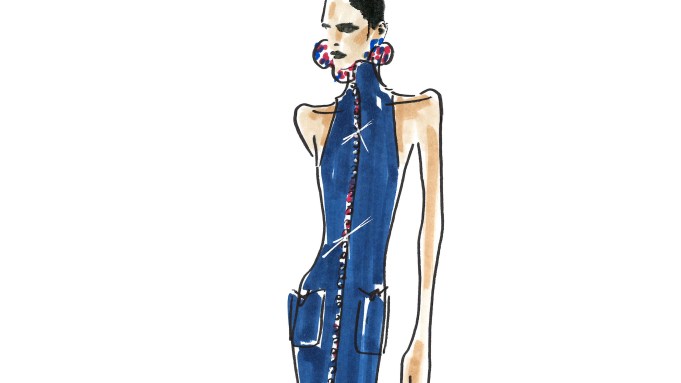 That seems to be the motto for Paris Couture Week, as leading luxury houses and designers adapt to the restrictions imposed by the coronavirus pandemic by showing their exclusive, made-to-measure creations virtually and learning to work with their wealthy clients remotely.

“When we emerge from this, as we eventually will, we will return to physical shows, but we’ll be able to enrich our communication content with all these different things we’ve tested and very often successfully implemented on the digital side,” he added.

Houses that had planned to stage physical shows this season were forced to adjust at the last minute after French authorities banned public gatherings in a bid to curb the spread of COVID-19. As another wave of lockdowns spread across Europe and beyond, Jean Paul Gaultier, Elie Saab, Zuhair Murad, Georges Hobeika and Ralph & Russo dropped out of the couture schedule.

Despite the challenges, 28 houses are participating this season, including Chanel, Dior, Giambattista Valli, Giorgio Armani Privé and Valentino. Kim Jones is set to make his highly anticipated women’s wear debut for Fendi, marking the first time the Roman house, which usually shows once a year in July, presents a spring couture collection.

The season will also mark the full return of Alber Elbaz to the fashion scene, more than five years after he exited Lanvin. The designer is to unveil his long-awaited AZ Factory project on Jan. 26 with a film, the first volley of his new digital and entertainment-driven approach to fashion.

Rounding out the newcomers are U.S. artist Sterling Ruby, who closes the week with his S.R.Studio.LA.CA. brand, and 24-year-old Charles de Vilmorin, making his couture debut less than a year after launching his label. Although not on the official schedule, New York-based label Area also plans to present its first couture line on Jan. 28.

After sitting out last season in Paris, Giorgio Armani had hoped to host a physical show in Milan to support his home city. “I announced this back in May when we thought that we would be out of our difficulties by this January. However, that sadly proved to be over-optimistic,” the designer told WWD.

Instead, he will hold a fashion show behind closed doors at Palazzo Orsini, to be broadcast on social media. “My couture ateliers have been working hard for months now on a new collection, and I believe it is right and proper to show this to the world, even if that is via a screen rather than in person,” Armani said.

He noted that the first time he broadcast a couture show was in 2007.

“I was probably the first designer to do so. There is actually something I like about showing the world of couture to a wider audience. Naturally, by its very nature couture is a refined and rarefied art, but its symbolic significance is that it expresses a designer’s aesthetic at its most unconstrained and imaginative — in the context of fashion, it is creativity in its purest form,” Armani argued.

Chanel also switched its plans at short notice. The French luxury house initially hoped to stage two shows for 300 guests each at the Grand Palais in Paris. It has tapped photographer Anton Corbijn to shoot the looks and film a runway show without guests that will be unveiled online on Tuesday.

“We had worked from the start on two possible scenarios for the next collections, both for haute couture and ready-to-wear. It’s important to be able to anticipate the situation and not to be caught out,” said Bruno Pavlovsky, president of fashion and president of Chanel SAS.

He reported that clients had responded positively to the house’s Métiers d’Art collection, filmed in December at a chateau in the Loire Valley with an audience of just one: celebrity ambassador Kristen Stewart. “We’re trying to reinforce the storytelling,” the executive said.

Its last couture collection, presented digitally in July, sold less than usual, though Pavlovsky was encouraged to see that top customers engaged with the ateliers in Paris via Zoom, FaceTime or Teams. “Deliveries are taking longer, not because the workshops are slower, but because it’s harder to connect with clients,” he noted.

Fittings are done remotely, and Chanel has set up specialized teams in countries like China and the U.S. to coordinate the process. “I think it will work even better this season, because we learned a lot of lessons from the first one,” Pavlovsky said. “We’re trying to be as open as possible and to listen to our clients’ wishes.”

Proof that working long-distance can be effective: Schiaparelli designed, produced and shipped Lady Gaga’s outfit for the presidential inauguration in a record 10 days. “The distance did not stop us, on the contrary, it made us more creative and more daring,” said the house’s chief executive officer Delphine Bellini.

“We’ve rethought the way we see and do things,” she continued. “We have completely embraced digital, both to communicate remotely, present our collections, direct fittings with our clients, but also by providing them with an exclusive e-boutique associated with personalized services from our sales team.”

Having been forced to postpone a planned event in Los Angeles in December, Schiaparelli hopes to open a shop-in-shop at Bergdorf Goodman in New York City this year. Viktor & Rolf, meanwhile, is working with multibrand retailers on a series of pop-up exhibitions, beginning in Tokyo in February.

“We believe that we need to keep combining physical and digital, with the idea that on the physical channel, we can display a deeper level of content, because you can really see the product, you can touch the product,” said Andrea Collesei, CEO of Viktor & Rolf.

After the popular success of Viktor Horsting and Rolf Snoeren’s digital couture presentation last season, featuring a satirical voiceover by singer Mika, the brand plans to extend the event beyond its couture week slot.

“We believe that it’s important to create content throughout the whole season, and so contrary to last time, you will see content dropped not necessarily only during the show, but also during the following months,” Collesei said.

“The designers find that the digital presentation is giving them the freedom to emphasize even more the experimental approach to their couture, so they are really keen on working on that side and using the presentation of couture as a sort of content factory,” he added.

The label is also tweaking its bridal, eveningwear and cocktail lines as it prepares to launch a revamped website and e-commerce platform in the first quarter. “The old concepts of eveningwear, formalwear, casualwear — they don’t make any sense anymore,” Collesei said.

“In our opinion, the new request of the consumer is for a product that is more fluid, a product that you can wear for a social event, but also for a video call, or because you’re comfortable at home, but you want to wear something special. So we are trying to experiment around with that,” he added.

Armani said the demand for couture at the moment is mainly from Asia and the Middle East, where health restrictions have been less severe in recent months. “This makes me think that once the rest of the world starts to regain its equilibrium, we will see an increase in demand for beautiful things, including couture,” he predicted.

Still, it won’t be business as usual, the designer predicted. “The fashion industry has, in my opinion, been due for a reckoning for a while now. Concerns like waste, the environment, too much product of poor quality, a marketing-driven approach that can lead to a disconnection with what the consumer really wants,” he enumerated.

“I hope that fashion will now review its priorities, learning from this experience,” Armani added.

Schiaparelli’s Bellini is also convinced the future format of couture week needs to adapt, even if she’s looking forward to the return of runway shows, which support a vast ecosystem of workshops and suppliers in France.

“Profound changes have taken place and I do not believe it would be relevant to go back to what was done before COVID-19, and do it the same way,” she said.

“We have to look at things in a different way, take the time to build projects in a more responsible way and acknowledge the fact that things must evolve, that there are societal and environmental issues that we must not turn away from,” the executive added.

Though Chanel has already announced it plans to stage its cruise show in May in Les Baux-de-Provence, a picturesque hilltop village in the south of France, Pavlovsky was wary for the immediate future.

“2021 will be another year of transition,” he said, noting that the house has suspended all plans to stage repeat shows for its Métiers d’Art and couture collections in the first half of the year. “It’s clear that fashion week in March will still be a little weird.”