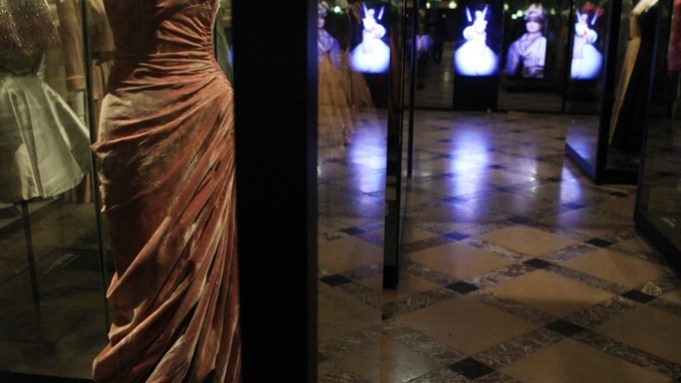 PARIS — It was some time in the late 19th century when Daniel Swarovski, founder of the famous crystal empire, got in touch with Charles Frederick Worth, the Englishman credited with inventing the art of high fashion, to inquire if he was interested in a collaboration. It was arguably the first of its kind in fashion history.

This marked the beginning of the crystal maker’s love affair with fashion, including high-profile collaborations with Christian Dior and Coco Chanel — a fact that might surprise many who stroll through the “Paris Haute Couture” exhibition that starts here Saturday at the Hôtel de Ville, supported by the Austrian crystal giant.

The show, which runs through July 6, brings together about 100 haute couture dresses alongside original designer sketches, photographs and accessories and is curated by Olivier Saillard, director of the fashion museum Musée Galliera, which is closed for renovation until September.

Built in chronological order from the founding days of couture to the present, the exhibit depicts vintage gowns in relationship with contemporary designers such as Azzedine Alaïa, Bouchra Jarrar and Givenchy, whose creations are injected at strategically important places. “[It’s] much like a cadaver exquis,” explained Saillard, referring to the French Surrealist technique of collective collage.

Particularly striking is the juxtaposition of a 1928 dress by Paquin and an Yves Saint Laurent model from 1968. “These were two very strong decades for women, and interestingly the dresses are very similar, too — richly embroidered, but very simple in style,” noted Saillard. “I’m now thinking about doing an exhibition dedicated to those two periods.”

To find the best examples, Saillard tapped the Galliera’s archives, counting more than 20,000 pieces. “We chose only those that were screaming: ‘Look at me, I’m haute couture.’ Some of the gowns have not been shown to the public in 40 years.”

Alongside the grand couturiers such as Balenciaga, Madeleine Vionnet and Christian Lacroix, visitors will also discover less familiar names including Molyneux, Martial & Armand, Jean Dessès and Gustav Beer, who closed down their maisons decades ago.

The oldest dress in the exhibition dates back to 1895. It’s a green velvet gown designed by Worth for Countess Elisabeth Greffulhe, who was a fountain of inspiration to French writer Marcel Proust. “This dress was Pop at a time when Pop had not been invented yet,” enthused Saillard.

Saillard said he “love[s] the fact that this inherently Parisian industry was invented by an Englishman. I’m preparing an exhibit for La Cité nationale de l’histoire de l’immigration, which will start in two years, to show how fashion in Paris has always been open to foreigners. It’s a sign of openness — we should be proud of that.”

Talking of heritage, Nadja Swarovski, who sits on her family company’s executive board, told WWD that she made it her “mission to communicate” her company’s ritzy history “more intensely.”

“I come from a family of engineers, who were concentrated on the product, not where it was going,” which is why she has started building a corporate archive, “documenting, collecting, scouting and buying everything back to make up for the losses.”

“The brand is not just about crystal animals and costume jewelry,” as many of the pieces in the exhibition also suggest. Swarovski said her favorite item is a 1952 Dior gown from silk and satin with crystal and pearl embroidery.

Being free and accessible to everyone, the exhibition is also keen on educating the broad public. “A lot of people don’t understand what haute couture is really about. We wanted to show that it does not always have to be a richly embroidered evening dress,” said Saillard. “The idea is to boast savoir faire, to create something very simple sometimes made from just one fabric.”

Like the sober skirt-suit designed by Coco Chanel in cream and black, which puts an exclamation mark at the end of the exhibition. “My sources tell me she wore this particular model every single day throughout 1965,” he revealed.