Retailers cite a plethora of trends, including Seventies and Eighties references, and outerwear galore. 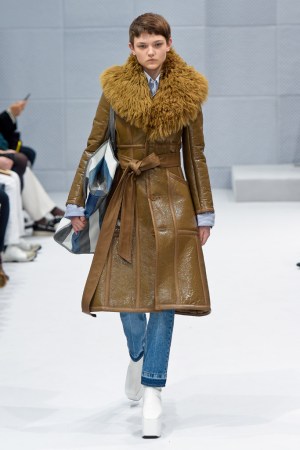 PARIS — Embellishments? Bring ’em on, said retailers, who praised the return of the decorative and glamorous clothes paraded during Paris Fashion Week, which ended its nine-day run on Wednesday.

“Rich opulent textures and embellishments are very prevalent; with velvet, brocades and an abundance of shine all featuring heavily in collections,” said Sarah Rutson, global vice president of buying at Net-a-porter. “Other trend stories include a return to Eighties glamour, military, exaggerated proportions and new approaches to layering.”

Miyako Sekimoto, fashion director for Matsuya in Tokyo, lauded the ruffles, shine and sparkle that recalled the Seventies, Eighties and disco. “That’s a big change because these last few years, the fashion trend was so effortless and relaxed,” she said.

Echoing other retailers, Rutson cited a strong streetwear influence, which seems to be usurping a long period of couture-influenced fashions.

“Not since Martin Margiela presented his first collection in 1989 has Paris seen such impact in this area,” noted Suzanne Timmins, senior vice president and fashion director of Hudson’s Bay Co. “Today it is Demna Gvasalia who reignites Paris Fashion Week with his coveted streetwear brand Vetements and much-anticipated collection for Balenciaga.”

“We are in a completely new phase,” agreed Nicole Fischelis, group vice president and fashion director of Macy’s Inc. “I see it as a response to the global climate, with the whole idea of streetwear, trash-couture and ath-leisure. I find the whole idea of fusion very interesting. It was so evident in New York, but I did not expect to see it to the same extent in Paris. There is tremendous creativity.”

Among trends, she cited gender-blending active streetwear as well as the continuation of a Bohemian, romantic vibe seen in many collections.

“We were really smitten with both the runway and showroom at Balenciaga, as well as Demna Gvasalia’s Vetements collection,” said Linda Fargo, Bergdorf Goodman’s senior vice president of the fashion office and store presentation. “The trends we’ll buy into include the men’s wear influence, rich surfaces such as lace, velvet, embellishment and shimmer, fur and shearling, cool classics and the candy store of great outerwear — one of the strongest categories of the season.”

Ken Downing, senior vice president and fashion director of Neiman Marcus, applauded many of the major brands as his top picks, including Saint Laurent, where he said Hedi Slimane “did a great job reinterpreting the drama of Mr. Saint Laurent in the Eighties. It’s the drama that creates excitement in the customer when there’s so much exposure out there.”

“It’s not enough to make just more clothes today,” said Jeffrey Kalinsky, vice president and designer fashion director at Nordstrom. “You’ve really got to deliver a strong fashion message.” The executive noted he found “a lot of compelling things” in Paris, whereas pre-collections were “a little challenging.” Strong shoulders, animal prints, masculine tailoring, velvet and embellishment topped his list of key elements. “There is no city to bring as much fashion as Paris,” he said.

“Paris had a very strange energy this trip,” said Roopal Patel, Saks Fifth Avenue senior vice president and fashion director. “There was a lot of uncertainty in the air with the changing of the guard at a few houses and even a few designers not present at certain houses. We didn’t know which way the wind was going to blow.”

She was referring to interim collections at Dior and Lanvin.

Tiziana Cardini, fashion director La Rinascente, characterized the nine days of shows as “transitional and uncertain.” “Major fashion houses have no creative directors, which made for a lack of clarity. Many collections had no strong focus. There was too much emphasis on the ‘wardrobe’ offer instead of a cohesive directional vision. Fashion needs inspiration and relevant ideas to fuel the conversation and excite customers,” she said.

Tomoko Ogura, senior fashion director of Barneys New York, also thought something was off. “Typically Paris is the highlight of the season for us but this time around there was an unsettled mood,” she said. “There were some encouraging highlights and new direction but in general we felt more strongly about what the designers presented during pre-collection.”

By contrast, other retailers were bullish about Paris.

“Overall it was a strong season, with some wonderful surprises along the way. We felt a sense of fresh inspiration across the board,” said Steven Cook, senior vice president of buying and merchandising at Toronto-based Holt Renfrew. He noted key items include wide-leg pants, flight jackets, shearlings of all kinds, mannish tailored shirts, midi skirts and trenchcoats.

“I feel Paris is having another ‘moment,’” agreed Cindy Ho, fashion director of 360 Style in Kuwait. “All brands are doing very interesting collections. There is a Seventies, Eighties and Nineties feel and then it [goes] futuristic. It’s exciting to see what is next. Also, I feel the non-French labels are getting really important,” she enthused, singling out the Japanese brands as standouts.

“Even though the weather was awful, the Paris season was very exciting and upbeat,” judged Emmanuel de Bayser, co-owner and chief buyer for The Corner in Berlin. “After the pre-collection buying in January when the general mood in Paris was not at its best, March was much more positive.

“Outerwear is definitely very strong, which is good for us since Berlin has a very strong outerwear market. Parkas, bombers, revisited coats: There were many exciting new options, so a very good season commercially since customers do buy these as investment pieces,” he said. “This is the way our customers buy ready-to-wear today: via single, very desirable and immediately recognizable pieces.”

Consequently, budgets are up. “Our business is growing and most of the hot brands that customers want show in Paris.”

“Our Paris business is very strong and budgets are up,” said Beth Buccini, owner and founder of Kirna Zabete in New York. “Paris pre-fall collections get much bigger budgets in general, because the runway deliveries tend to be so late. However, our budgets, particularly at Vetements and Off-White, are up.”

In terms of trends or categories likely to drive business, Buccini said: “We loved the full pants at Céline, the jeans and sweatshirts at Vetements and the knits at Sacai.”

Sarah Andelman, creative director and purchasing manager at Colette, cited Noir, Vetements, Julien David, Courrèges and Loewe as her favorite collections. Colette is to start stocking Esteban Cortazar, as of the fall season. “It was a good season overall,” she said.

“We were really impressed with what we saw in Paris this season and we picked up quite a few new brands. This will be reflected in the budget,” said Anita Barr, group fashion director at Harvey Nichols. “Outwear was really strong across all the shows and will definitely appeal to the Harvey Nichols customer.”

Among trends, she cited animal prints, fur, velvet, jewel tones, Lurex and checked fabrics, as well as the range of outerwear, she said.

“Paris was quite strong for us, we were very happy with what we found,” she said, adding that stable business meant the retailer is keeping its Paris budgets flat, but that it would be allocating resources to emerging designers.

“In Paris we have seen a focus on outerwear and separates rather than dresses, which will work for our customer,” said Judd Crane, Selfridges’ director of women’s wear and accessories. “Statement knitwear from Paris is strong as always.”

“There is enough newness to intrigue our customer — and it is quite wearable. Last fall was not strong and she is looking to update her wardrobe now,” said Scott Tepper, buying director for fashion at Liberty. “We are excited to offer our customer the terrific oversize coats and relaxed suiting looks in men’s wear fabrics that have emerged this season.”

“We loved the strong street-cool trend seen in a lot of maisons,” said Pascale Camart, head buyer of women’s wear and accessories at Galeries Lafayette. “Also the twist of very feminine and sexy fabrics like patent leather, transparent and fur mixed with knit, cotton sweater and flat shoes.”

While Paris vowed to stick with showing fall collections in March and spring ones in October, the see-now, buy-now juggernaut was a hot topic at the shows.

“We have had tremendous success with see-now, buy-now capsule collections,” said Timmins at Hudson’s Bay. “The consumer is driving the demand and will ultimately be the deciding force in settling ‘the great debate.'”

Liberty’s Tepper agreed: “Clients have been e-mailing me all week asking if I can get them the new Isabel Marant coats immediately that they’ve just seen, it’s unfortunate that I can’t.”

When asked if the Paris women’s collections are getting larger or smaller budgets, Laura Larbalestier, women’s buying director at Browns Fashion, said: “As the visibility of all of shows increased with customers we feel very confident to grow the runway deliveries significantly.”

Larbalestier cited ankle boots as key, along with velvet and pearls.

Ikram Goldman, owner of Ikram in Chicago, said budgets have been maintained for the entire season overall.

“There is a whole new movement, which is street meets elegance,” she said. “There’s definitely a full commercial potential in Paris in that the silhouettes are spectacular.…It was all about either the oversize suit jacket or cape layered with an oversize dress that’s belted to give the shape that a woman loves. So in that sense I find the style being a little bit looser, a little bit more forgiving.”

“Creativity was very powerful this season in all categories,” said Jennifer Cuvillier, style director at Le Bon Marché in Paris. “The feminine utilitarian pirate was very strong this season with the accent on the waist with belted looks, volume on the arms and shoulder with decorative materials.”

Elizabeth Lepore, owner and buyer at Jimmy’s in Brooklyn and the Hamptons, said trends such as corsetry, Eighties legs, oversize garments and over-the-knee boots would work well for her customer.

Leila Yavari, fashion director of the luxury fashion Web site Stylebop, praised the “sumptuous layers and mannish coats at Nina Ricci — especially when worn with miniskirts for an unexpected flash of skin; the cocooning proportions at Céline and the monastic, mineral hued swaths at Rick Owens.”

She predicts that outerwear — puffers, bombers and parkas — will be extremely sought after. “You could already feel every editor coveting them from their seats,” she said.