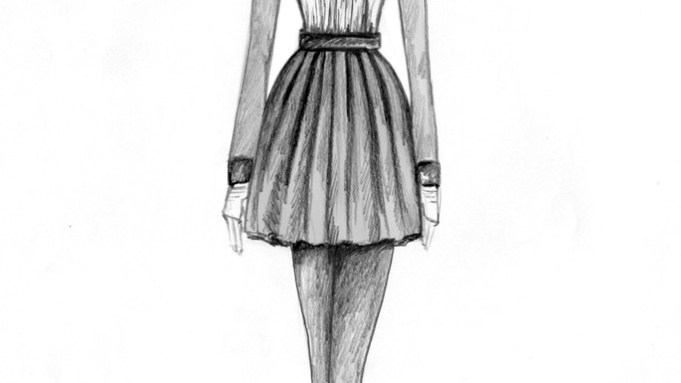 It’s been more than a year since Maxime Simoëns showed a collection. In January 2012 he showed his spring 2012 ready-to-wear during couture week —rather clumsy timing given that he had sold the collection six months prior. But it got him on the radar. “We definitely gained some visibility showing during couture,” he recalled. “It was a great opportunity.”

After a tumultuous year that had him rumored to be a contender for Dior and a fruitless attempt at the helm of French house Leonard, Simoëns said he took some time to concentrate on his own company. “This is really like a reboot,” Simoëns said at a preview at his studio and headquarters, explaining that the company has been almost entirely restructured.

In addition to rtw, Simoëns will show his first bag and shoe style along with some jewelry on the runway. For the clothes, Simoëns said he is really true to himself, building on silhouettes that are very structured with geometric architecture and feminine body-conscious appeal. “Sensual but not sexual,” he said.

The women’s tuxedo — or “le smoking” — is the focus of a new luxury capsule collection by Pallas, a small, family-owned Paris atelier that until now has been concentrating its know-how on developing prototypes for luxury players such as Balenciaga and Mugler.

The firm recruited a fitting muse — Hannelore Knuts — as style consultant, literally building the pieces on the androgynous Belgian model, who also lensed a series of self-portraits for the look book.

“I’ve always worn men’s clothes. I’m not a typical sexy dresser, and the tuxedo, it was like: ‘Of course,’” Knuts said during a fitting at the company’s atelier in the 9th arrondissement in Paris, flanked by Pallas president Daniel Pallas, whose father, David, founded the house in 1961, and his partner Véronique Bousquet, who serves as the firm’s pattern cutter.

Comprising seven minimalist silhouettes in black, navy and off-white — including a long, sleeveless tuxedo dress — the line will be produced by the firm’s Paris-based team of petites mains and presented by appointment during Paris Fashion Week.

Jonathan Riss’ debut Paris presentation has been a long time coming. The Paris-based Belgian designer, who is known for his easy cocktail dresses, launched his label — Jay Ahr — in Paris in 2006, opening a sprawling store and design studio on Rue du 29 Juillet, next to Colette.

He opened a private salon in Manhattan in 2008, and has just cut the ribbon on a 1,300-square-foot embroidery atelier in Beijing, where he has been developing a series of artworks for a soon-to-be-staged exhibition titled “Animal Armors.”

Next up, the designer is planning a series of mini-shows in the foyer of his Paris headquarters for March 1. “I wanted to get the foundations in place first,” said Riss. His fall collection plays on graphic and curvaceous lines for the tailoring, with a palette centering on black and white with pops of silver, gold, khaki and pink.

Riss will also be putting forward his daywear and separates offering. Jay Ahr is carried in around 70 doors, including Bergdorf Goodman, Luisa Via Roma and Printemps.

It’s been a 30-year wait, but Jean-Claude Jitrois has finally made it onto the Paris calendar. A longtimeretail presence in the French capital, the leather specialist only recently joined the Chambre Syndicale, French fashion’s governing body. His show is slated to take place March 6 at the Saint James & Albany Hotel-Spa.

“Paris is still a very important showcase for foreign buyers,” the designer said, adding that his brand is now present in countries including China, Taiwan, Russia, Azerbaijan and Kazakhstan.

While the European Union represents 60 percent of the company’s business, Jitrois predicts markets outside the EU will account for the lion’s share of sales by 2014.

The brand is carried in around 90 doors worldwide, with a flurry of openings due this year, including two freestanding stores in China and one in Aspen, Colo. — all through franchise agreements.

For fall Jitrois will present a collection inspired by the elegant women that fascinated him as a young boy growing up in Aix-en-Provence in the Fifties. In April he is planning to take his fall collection to China.

Acne Studios is gearing up for its first women’s ready-to-wear show in Paris, to take place March 2 at the Grand Palais. For the fall collection, the brand’s creative director, Jonny Johansson, collaborated with photographer Katerina Jebb and the Musée Galliera.

With Musée Galliera director Olivier Saillard acting as curator, the pair selected fashion pieces from the 18th century onward from the Paris-based museum’s archives. Jebb then scanned the pieces and made photomontages, mostly of the garments’ insides, which Johansson had printed on fabrics used in a large portion of Acne’s women’s wear collection and a capsule line for men, also to be presented on the runway.

“I want [the collection] to consist of the past, present and future,” said Johansson, explaining the past is represented by the historic garments; the present is signified by the actual design with Jebb, which was mostly done quickly, on-the-spot, and the future results from the line hitting stores in six months’ time.
Acne usually presents its women’s rtw in London, and it has not yet been decided whether the move to the City of Light will be a one-off.

Just last year, the designer said he did not think runway shows were the right vehicle for him to express his vision, but he had a change of heart. “Right now, I want to show again the stronger and more creative side of Undercover and that is why I am going back to runway,” he said, adding that the break has brought him “back to a beginner’s spirit.”

Although he is mum on his inspiration for fall, it’s clear that his two-season stint doing a line for fast-fashion giant Uniqlo has influenced his creative process.

“The collaboration with Uniqlo gave me an opportunity to think about the balance between creation and business,” he explained. “Now, I am making stronger creative works. In the meanwhile, we are forming a team to create products which will support our business.”

After building up a strong relationship with handful of influential retailers, such as British concept store LN-CC, Yang Li will bring his fourth collection to a broader audience with his first runway show.

But don’t expect a classic format from this fiercely independent designer. “It is important to show my clothes in movement, but expect some things happening onstage, too,” the designer teased during a preview at his London studio.

The big news is the brand’s expansion into knitwear. Bright pink or deep burgundy open-back sweaters and bicolor ribbed turtlenecks will punctuate the rather somber palette of the collection. Li even encouraged his manufacturers to work together on some double-faced pieces fusing woven and knitted fabrics.

Berlin designers are getting an international boost for fall with the premiere of Berlin Showroom at Espace Topographie de l’art in the Marais, running March 1 to 4.

Spotlighting the collections of 23 Berlin-based designers, this multibrand showroom is cofinanced by the Berlin Senate and the European Regional Development Fund, and will be held each season during Paris Fashion Week.

“It’s a good cross section of what’s going on in Berlin,” commented press and sales agent Arne Eberle, who organized the endeavor together with the International Design Center Berlin and the regional initiative Projekt Zukunft.

Berlin Showroom isn’t the only Berlin fashion game in town. Augustin Teboul, Antonia Goy, Vladimir Karaleev, Perret Schaad, Anntian and Kaviar Gauche (who will stage a runway show at the Couvent des Récollets on March 2) are among the other Berliners headed to Paris this season.