Paris Preview: Ones to Watch

A few names worth noting for Paris fashion week.

By Samantha Conti and Miles Socha and Katya Foreman on September 28, 2009
View Slideshow 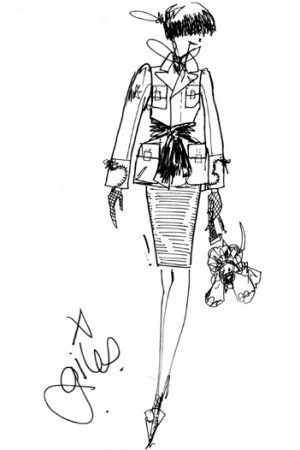 A few names worth noting for Paris fashion week.

This story first appeared in the September 28, 2009 issue of WWD. Subscribe Today.

After watching the hit BBC documentary “Lost Land of the Volcano” — about new species of wildlife discovered in Papua, New Guinea — Giles Deacon couldn’t get creepy-crawly creatures off his mind. So he’s dedicating his spring show to them — and to some prehistoric beasts, as well.

“Think toxic tarantulas and hyper-reptilian fabrics,” said Deacon, who will show in Paris for the first time as the winner of a 2009 ANDAM Award. To mark the industry honor, Pierre Bergé will host a cocktail for the designer at the French Ministry of Culture on Tuesday.

At work on the collection in his East London studio, Deacon shows off a length of tulle dotted with spider appliqués, bolts of spotty, iridescent silks — and one pink-and-green fabric with a cheeky print of mating dinosaurs. Meanwhile, on a nearby table, black-and-red Swarovski-crystal-clad scorpions and scary bugs are lined up like toy soldiers, ready to be stuck on dresses and jackets. Accessories, too, have a natural-history bent, with one shoulder bag shaped like a baby triceratops, which will come covered in teddy bear fur or snakeskin.

In Paris, Deacon also will be showing and selling his costume jewelry — a debut 18-piece collection featuring spider-shaped rings, and baby mice, dinosaurs and headless chimps on necklaces and bracelets.

Materials include silk, pearls, gold and Swarovski crystals, and prices range from 220 pounds, or $328, for a Swarovski pearl bracelet to $3,280 for a hand-worked silk necklace. Deacon says he’s all revved up for his show at the Palais de Tokyo on Oct. 8. “It’ll be interesting to see where it all leads,” he said.

Georgina Brandolini looks right at home amid the upscale hippie atmosphere of Antik Batik’s Paris showrooms — and so does her new capsule line of sweaters for the fast-growing French contemporary brand.

“Sportive chic — something you put on over a pair of jeans,” said Brandolini of her debut 10-piece collection for fall, all in cashmere, hand-trimmed with delicate glass beads, often tone-on-tone, or splashed with rough-hewn metal sequins in heraldic shapes. The first styles, most also elongated into snappy minidresses, are slated to arrived in mid-November at Antik Batik’s three Paris boutiques, plus Net-a-porter and Daslu in Brazil.

Brandolini, who previously had a signature line of sweaters after a long fashion career at Balmain and Valentino, marveled at the retail prices — 285 euros, or about $418 at current exchange, for a V-neck, and 360 euros, or $528, for a dress — thanks to Antik Batik’s network of factories and artisans and a larger scale of production.

“We really never did so many sweaters,” piped in Gabriella Cortese, the Italian-born designer and founder behind Antik Batik, which sells its luxuriously embellished, bohemian clothes to about 1,000 doors. The privately held company recently opened boutiques in Dubai and Kuwait in partnership with Chaloub Group and plans to have about 10 boutiques in the Middle East region in the next five years, she added.

Cortese said the Georgina Brandolini for Antik Batik range would be targeted at “A-level” fashion shops. A spring collection, boasting silk and viscose blends, is in the works.

“It’s not so ladylike and precious. I thought, let’s get something really new,” said Carven’s new women’s wear designer, Guillaume Henry, 30, at a preview of his first collection for the house. He was actually referring to the new chlorophyll-green and aniseed Carven macaroon he’s just developed for the Ladurée tea salon. But the concept also applies to his new wardrobe for the off-the-radar fashion house, based on young-spirited, day-to-night looks that could work with a pair of Converse sneakers or killer heels. Mixing genres, poufy cocktail dresses are fashioned from sporty techno fabrics, while sporty cropped jackets have sophisticated, ruched hems. Draped second-skin frocks come layered with boyish knits and men’s jackets, while an exclusive print with archive-inspired illustrations is used on basics, such as a pajama pant. Henry, who joined Carven from Paule Ka, described the vibe as “Fruit of the Loom meets Oscar de la Renta.” The line also includes a small range of jewelry, bags and shoes, as well as a silk scarf designed by illustrator Jeanne Detallante.

Cedric Charlier is thinking of “dresses as light as paper” for Cacharel, the label that has become a byword for pretty Parisian chic.

The 31-year-old Belgian designer — who joined the fashion house in April after spending the last six years working as Alber Elbaz’s assistant at Lanvin — is readying his first collection for spring, which will be shown on Oct. 3.

During a short break from the hectic work on the finishing touches, Charlier told WWD he was inspired by a desire for lightness and spontaneity, which he found in Cacharel’s prints. But he also wanted to combine spontaneity with a particular attention to the cut and what he termed “the architecture of the garment.”

For its runway comeback, Cacharel has turned to art-inspired prints designed in collaboration with Colombian painter Alberto Vejarano, using a new technology, which allows printing hundreds of colors on fabric.

While remaining coy about the details of the collection, Charlier said the 38 looks will mostly focus on dresses and shirts, as well as dresses that become shirts, and vice versa.

Bermuda shorts and trousers also will appear, with just a minimum of accessories to complement the clothes.

“I wanted to write a novella, rather than a novel,” said Charlier.

But as he readied to return to his studio to prepare the looks that will close the show, he let slip that “the grand finale will be an explosion of colors and prints.”

Too many looks can spoil the broth, according to Italian designer Alberto Marani, 35, who has scaled back his signature line for spring. “The idea was to give an image to the brand and to allow for more creativity, to not be bound by fabrics or [commercial restrictions],” said the designer, whose second line, M/Marani, is distributed in around 250 doors.

A sweet “butterfly safari” theme flutters through Hamilton — Paris’ second collection, seen in a white safari look with languid wing-inspired draping, or a boho-chic tunic sheathed in a layer of watery, butterfly-print organza. Colors are mainly pastels laced with black and jungle green. Designed by Charles Sebline and Sophie Hamilton, the hot blouse-focused newcomer was picked up by 12 stores in its first season, including Maria Luisa in Paris and Kirna Zabête in New York.