Paris Preview: Ones to Watch

Look out for new names at old houses, a new line and a designer's fresh start at Paris Fashion Week. 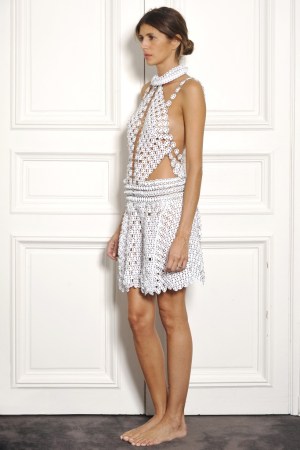 Young designer Lydia Maurer, recently promoted to creative director after two seasons as studio design director, said she wants to put “the woman at the center stage of the collection.”

Inspirations include Marisa Berenson and Anita Pallenberg wearing Rabanne creations in the Sixties and Seventies, sexy and psychedelic.

Maurer’s debut collection references Rabanne’s iconic metal dresses, with the discs appearing in metallic fabrics, eyelet embroidery and silicon, while metal mesh is mixed with translucent water snake or textured silk and embroidered to blend the two fabrics. Eager to lighten things up and bring even more sensuality and movement to the intricately worked short dresses and tunics, she is creating some body jewelry pieces in collaboration with jewelry designer Taher Chemirik. There are also new lightweight, leather versions of the 1969 bag with a zippered closure, adding pragmatism to the house heritage.

Forget about the false start last season. After French designer Maxime Simoens left Leonard after only one runway outing, the house is going back to its roots — floral prints and silk jersey — two elements that were missing from Simoens’ fall lineup of edgy, rock ’n’ roll fare.

Requiem designer Raffaele Borriello has taken on the design helm and said he is more keen on working with the house’s codes. Since arriving last March, he plunged into Leonard’s extensive archives.

He was particularly attracted by the graphic elements of some of the floral and vegetal prints from late Sixties and early Seventies. The clothes are likewise sharp, as in a short coatdress with constructed, narrow shoulders and a mix of draped and tailored elements.

Borriello said he wishes “to bring structure” to its core silk jersey fabric, while not forgetting the evening potential of those signature prints. The spring collection spans from daywear to a couple of long evening frocks in organza, some overlaid with transparent plastic sequins.

After a three-season break, Wunderkind is returning to the Paris runway this season — not once, but three times. Designer Wolfgang Joop, who bought back all rights to his Potsdam, Germany-based luxury label in March 2011, is staging three intimate showings in Fondation Dosne-Thiers so viewers can focus on the clothes.

The fabrics are technically complicated but visually low-key, the colors faded, the self-designed prints mildly “deranged” in shapes that favor bias cuts and draping that also  look disordered.

“The biggest news,” said chief executive officer Thomas Engelkamp, “is that we’re back. With the Wunderkind DNA in place. Which means [the collection] will always be demanding in some way, yet with a better balance between extraordinary pieces and sales pieces.”

Designing couple Isabelle Guedon and Benjamin Caron draw inspiration from their love for the British punk rock scene to create a wardrobe of cool, classic shoes.

Both have a strong background in both the footwear and fashion business. Caron was trained in shoemaking ateliers and Guedon has worked for fashion houses such as Guy Laroche under Alber Elbaz and Yves Saint Laurent. Their goal is to create basic shapes such as derby, loafers and creepers with a subtle “bad boy” retro edge. Shoes are underpinned by a crepe sole made in three parts for ultracomfort and resistance.

This shoe brand for men and women is only in its second season but has already attracted many influential retailers, including Colette, Dover Street Market and Lane Crawford.

Next up is an Adieu store slated to open in October at 7 Rue d’Aboukir in the 2nd arrondissement of Paris. The line is produced in Portugal and retail prices are around 400 to 450 euros ($520 to $650).

Céline Méteil, 33, honed her design skills in the ateliers of John Galliano, Balenciaga and Felipe Oliveira Baptista, where she developed a penchant for working with raw cloths typically used for prototypes, such as jaconet and toile, or muslin.

She started experimenting with gauzy fabrics to form her own small collections, eventually edging into the spotlight last year when she scooped the Première Vision and Audience Award prizes at the Hyères International Festival of Fashion and Photography.

Méteil will show as part of the Designers Apartment showcase organized by the Fédération Française de la Couture, du Prêt-à-Porter des Couturiers et des Créateurs de Mode. Operating from Sept. 27 until Oct. 3, the apartment is located at the Atelier Richelieu town house near the Palais Royal.

The novel concept behind 23-year-old Etienne Deroeux’s namesake collection is that each of his designs is limited to 100 numbered editions.

The designer cut his teeth in the couture atelier of Jean-Louis Scherrer, assisting the house’s former longtime creative director Stéphane Rolland, followed by design stints at Peter Pilotto in London and Matthew Ames in New York.

He likes to keep things on a human scale, working with small local factories for his production. Favoring pure lines and simple cuts, Deroeux sees his timeless designs as embodying “discreet luxury.” Highlights for spring, which will be presented on Oct. 1 at the JGM Galerie, include a long white dress in silk crepe with contrast leather sleeves, a sky-blue leather bomber jacket and a tailored denim suit made from authentic denim picked up on a recent road trip through America.

Retail prices start at $210 for a double-layered silk tank top. The brand is distributed in eight stores, including Henrik Vibskov in New York, Alter in Shanghai and Hunting and Collecting in Brussels.