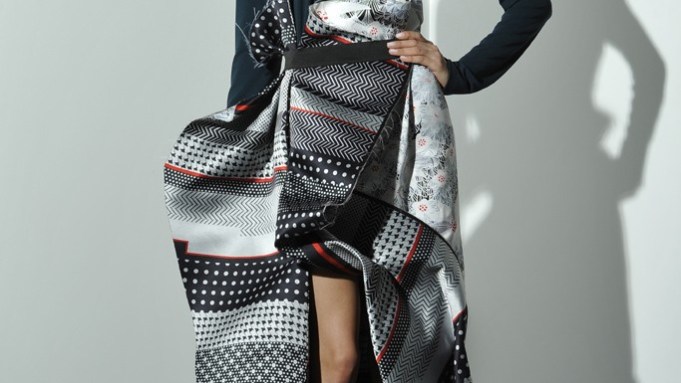 Seven designers on the rise.

Having specialized in intricate textural effects at her fledgling brand, Paris-based designer Yiqing Yin is turning her hand to prints for her debut collection as creative director of Leonard.

“I haven’t used [prints] a lot in my own collections,” she acknowledged. But for Leonard, “I selected prints that I thought could have a modern resonance, once we updated them a little, colorized or sometimes even reworked them, and tried them out on fabrics the house is not necessarily used to working with.”

Yin transposed archival Leonard patterns onto fabrics such as wool, jacquard and a triple silk satin. She pleated, draped and layered them to break up the motifs and create multifunctional outfits in stark contrast with the house’s signature floral-print silk jersey dresses.

“I wanted to express a falsely nonchalant attitude, as if you draped a traditional Leonard silk scarf randomly on the body,” Yin said.

For instance, a bulky black sweater was slung over an asymmetric printed evening gown, while a tattoo-effect sheer T-shirt could be worn under a plain sleeveless dress.

Yin — who was born in Beijing but left China at the age of four — nodded to Leonard’s strong presence in Asia and her own heritage, sprinkling in design elements such as Empire waists and kimono collars and sleeves.

“I don’t want it to be a Japanese-inspired collection. Rather, it’s ‘grunge geisha’ — much more of a mix of genres and origins, with a kind of nomadic attitude,” she said.

At Avoc, clothes are part of a bigger picture that encompasses decorative arts, architecture and scenography, too.

Designer Laura Do, who founded the label with Bastien Laurent in 2013 following a career in interior design and bespoke tailoring, said the idea was “to produce a product that comes with its own universe.”

Chapter One is the duo’s first women’s collection, a tribute to the work of Jean-Michel Frank, the Parisian interior designer from the Thirties most famous for his beautiful straw marquetry furniture, which the designers reinterpreted as a print.

The clothes follow strict, architectural lines in a minimal rage of colors. Contemporary and utilitarian cuts hark back to the functionality of workwear, while a cutout Mao collar, one of the label’s declared signifiers, adds a playful touch.

“I admit, we are big fans of the uniform,” said Laurent, a former artistic director at Wieden+Kennedy in Amsterdam.

For their first presentation at the Designers Apartment showroom, the duo are expected to build their own set, featuring a selection of design pieces from Knoll International, Maiza Editions and Hologram Paris, among others, to match the theme of the first chapter, which is “Domestic Madness.” Each season, Do and Laurent intend to add a little more to their minimalist wardrobe with a twist.

Glenn Martens’ first full-fledged women’s collection at the helm of Y/Project continues along the lines of his men’s effort, which he introduced last January. It stays to the house’s love of leather, but complemented with a touch of mousseline  and washed satin for a softer allure.

Martens, who took over the creative direction of the house after its founder and designer Yohan Serfaty died in 2013, said he “wanted masculine tailoring and a rough look, but one that is broken up with ultrasexy pieces.”

The gender-bending concept translates into T-shirt dresses draped with drawstrings in the shape of a Y. Individually adjustable, the ropes continue as a theme on bomber jackets and Gothic bustier dresses, while Martens’ tailoring skills come through via long skirts and ample pants constructed from multiple silk or woolen panels. The designer says he has “a thing” for wide-legged suit pants.

“I call it the ‘Basic Instinct’ look, because it’s something that’s easy to wear, but looks sexy at the same time,” he said.

Yasu Michino is no stranger to accessories. He’s been designing bags for the past 10 years at a number of houses, including Givenchy, Yves Saint Laurent, Sonia Rykiel and Delvaux, for which he continues to consult.

“But now,” he says, “it’s a whole new chapter, because it’s the first time I’m designing for myself.”

Michino said the idea for the 45-piece women’s line came from hours spent on the train or plane every week, during which he imagined “a modern chic traveler.”

“I wanted function, easy access and beautiful fabrics,” he said, suggesting, “You can even use my bags as a cushion.”

Having launched his label Off-White with a men’s collection last month, Virgil Abloh is rolling out his debut women’s line with showroom presentations in Milan and Paris.

“The concept of high-low, I think, is a part of this generation of young fashion muses and designers, and I want to embrace that within one collection,” he said.

“I want to be a leader in that genre, to take street ideas and develop them at a higher level with more layers, so that it’s just as well-informed and inspired as what we’re seeing on the catwalks in Paris,” Abloh added.

Accordingly, his women’s creations for fall are more polished than the “elevated streetwear” he showed for men. Titled “I Only Smoke When I Drink,” the first collection features pleated velvet alongside denim and canvas, while boiled wool has been fused with Neoprene on a set of overcoats.

Strong colors and bold graphics reflect Abloh’s formal training as an architect. Sourced and produced in Italy, the collection is priced from $160 for T-shirts to up to $3,000 for overcoats with hand embroidery.

A globetrotter at heart, young Mexican designer Gerardo Ruiz-Musi will present his second collection of luxurious handbags this season.

Dedicated to his native country’s craftsmanship, where the line is produced, the Paris-based designer works only with small artisanal ateliers.

Ruiz-Musi’s collection comprises a couple of unisex styles like a backpack with front pocket and handle for ease in traveling, and more feminine pieces such as clutches and handbags featuring signature industrial hardware in brass, like big bolts and buttons.

This season, the designer is sticking to a warm, slightly Seventies palette with tan and brown nubuck and calfskin mixed with hand-painted python or artisanal wool created on ancient treadle looms, plus a couple of hard-core chic pieces in all black.

Talk about a well-kept secret: This season marks the arrival of a new line founded by four anonymous designers — three women and a man who prefer not to be named publicly — who all met and worked at Maison Martin Margiela.

Their collection, simply called Vetements, straddles between surrealistic and conceptual and is not aimed at any defined look or season, according to one of the partners. “The idea is to create pieces that anyone can adapt and mix to his or her personal taste and look.”

Shown in a preview in a Paris apartment, which serves as their atelier, the first collection has an almost “brutalist” quality, following the style of the cult designer for which they worked. It will feature some twisted classics, such as trenches and boxy tailoring flattened as if squished in a suitcase; reworked denim pieces made from vintage jeans with raw asymmetric hems; ribbed knit sweaters stitched to expose their construction, and midcalf A-line skirts, some done in thin stretch nylon stocking material, which were actually produced by a French hosiery factory.

The accessories emphasize playfulness — leather boots have a heel the shape and size of a small plastic lighter, while jewelry is shaped from oversize silver springs.