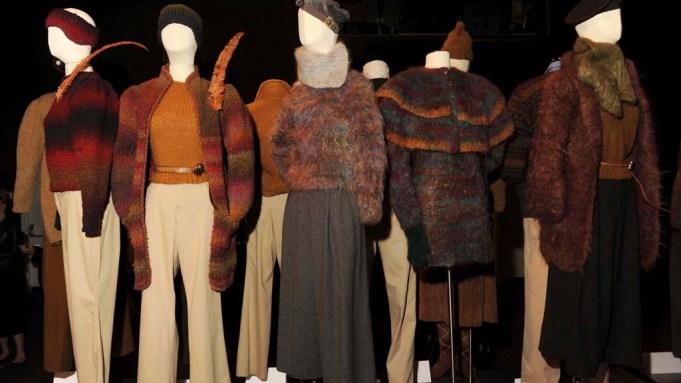 Erstwhile friends, family and admirers of the late Perry Ellis from up and down Seventh Avenue congregated at the midtown campus of Parsons The New School for Design on Thursday evening. The gathering was a celebration of the new book “Perry Ellis: An American Original,” a hefty, picture-filled biography and tribute to the designer by Jeffrey Banks, Doria de la Chapelle and Erica Lennard, published by Rizzoli.

The centerpiece of the room was a one-night-only exhibition of 69 looks designed by Ellis from 1978 to 1986, the years he designed under his own name. The ad hoc assemblage was culled from the private collections of former Perry Ellis customers and colleagues, like Patricia Pastor and Jed Krascella, Ellis’ design assistants, who were both in attendance. It was the largest collection of Perry Ellis creations seen in one place since his fall 1986 runway show. He died shortly after presenting that collection.

“Perry was really very modern. And he was also very attractive,” remembered Diane von Furstenberg, president of the Council of Fashion Designers of America, which cohosted the evening with Parsons and Perry Ellis International. “He was a little mysterious. And he was cool.”

An air of nostalgia suffused the room as attendees who knew Ellis from his glory days reminisced about the period. Isaac Mizrahi, who got his start working for Ellis, was on hand, as was Patricia Underwood, who made hats for Ellis’ shows, and Jean Rosenberg, the legendary former merchandising director at Henri Bendel who put a Perry Ellis shop in the store.

Laurence Leeds Jr., who was the chairman and chief executive officer of Manhattan Industries, the now-defunct company that owned the Perry Ellis brand, recalled the beginnings of the business. He took no credit for recognizing the budding promise of the young designer, who got his start designing a label called Vera Sportswear for Manhattan Industries.

“I would like to credit myself with such astute perspicacity but I can’t do that,” said Leeds, who is now chairman of the investment firm Buckingham Capital Management. “I remember I got a call from Frank Rockman, who was president of the company, and he said, ‘I have this young designer who is very talented.’ I said I would come down and look at the clothes. They looked fine to me.”

Leeds later arranged for a small fashion show of Ellis’ very early designs, inviting WWD’s John Fairchild and Michael Coady, along with The New York Times’ Bernadine Morris and Carrie Donovan, among others, to his offices. “They fell in love with Perry. And thus Perry Ellis was born,” said Leeds.

Simon Collins, dean of fashion at Parsons, said Ellis “proved that an American designer could be important, in the same way that Claire McCardell had done before him. He helped define the American style.”

Perry Ellis’ 28-year-old daughter, Tyler Alexandra Gallagher Ellis, has followed in her father’s footsteps and launched an upscale handbag company, under the name Tyler Alexandra. She showed off one of her designs, whose label bears the distinctive cursive of Ellis’ handwriting. “We used his penmanship. So, he’s a part of every bag I make,” she noted proudly.