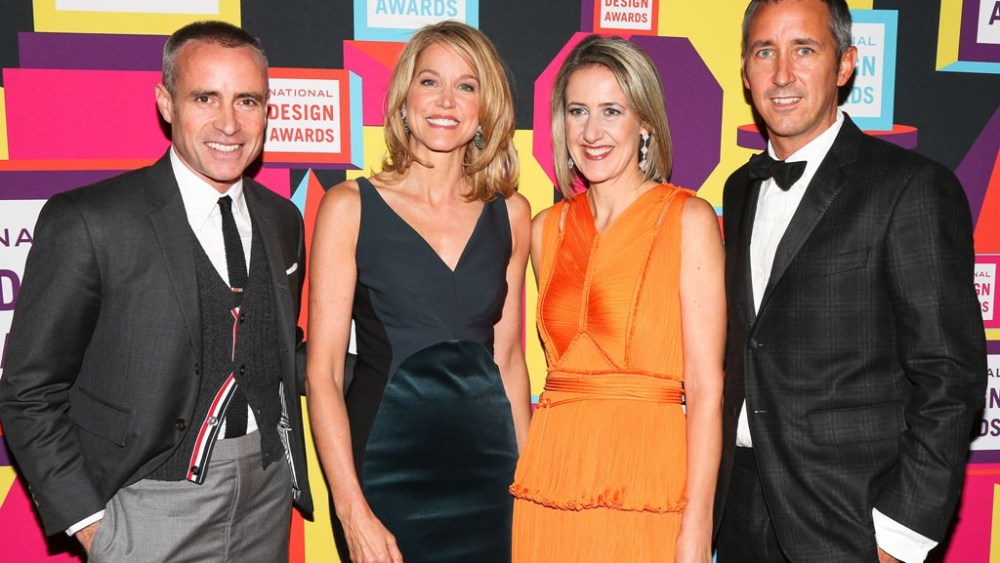 NEW YORK — Given the brain trust at Wednesday night’s National Design Awards, there was no denying the crowd’s collective power.

Twenty-seven previous honorees joined this year’s 11 standouts for the Cooper-Hewitt National Design Museum’s annual gala at Pier Sixty. Massimo Vignelli, Frank Gehry, Stefan Sagmeister, Moshe Safdie, Thomas Jayne, John Maeda, Thom Browne, Isabel and Ruben Toledo, Mohsen Mostafavi and Simon Doonan were among the faces in the crowd. Before Paula Zahn kicked off the awards, there was a tribute to the museum’s former director Bill Moggridge, who died last month. In addition to cofounding IDEO, he is credited with designing what is widely recognized as the first laptop computer, called the Grid Compass.

The human element of design was a recurring theme throughout the gala. Numerous projects were referenced to illustrate how design can further the common good. Interaction Design winner Evan Roth’s eye tracking system allows amyotrophic lateral sclerosis (Lou Gehrig’s disease) patients to draw with their eyes. Corporate & Institutional Achievement Award winner Design That Matters’ outdoor film projector is being used in Africa for nighttime adult literacy classes. Design That Matters’ Timothy Prestero seemed to sum up the purist mind-set, “As designers, we know that cheaper has a floor but better has no ceiling.”

Design Mind winner Janine Benyus talked up biomimicry: “seeing nature as a mentor instead of a warehouse.” Landscape Architecture winners Chris Reed and Scott Bishop offered a case for the emerging discipline of landscape urbanism — the spaces between buildings and unconventional large-scale open spaces like the High Line and Brooklyn Bridge Park.

The intellectual trumped commercial again and again, prompting Fashion Design winner Browne to say of the jury, “Probably from that video [of my work] you can tell they didn’t ask, ‘Who is going to wear that?’”

Quirky as the night was, it somehow hung together like a well-oiled production, so much so that many detail-minded guests caught the passing of an Affinity yacht just as Lifetime Achievement Award winner Richard Saul Wurman was saying, “In this room is an astonishing group of extraordinary people and they planned this meeting wrong. Because we should have just talked to each other longer and introduced one another longer because the value of this room is the space between — not these funny little ‘thank you, thank you’ stories at the end. I mean, this is the least interesting part of the evening. It should have been 90 percent just talking and walking around, and then just giving away these little glass things.”

In introducing Wurman, creator of the TED conferences, Gehry described his friend as “a curious mother,” Wurman said, “When I’m asked, ‘What do you want out of life?’ I just say interesting days. I want tomorrow for everybody here to be interesting, just to have interesting days, whatever that means to you.”