Here to show off her bridal collection, the designer set up what amounted to a mini-museum in her Crosby Street Hotel suite. 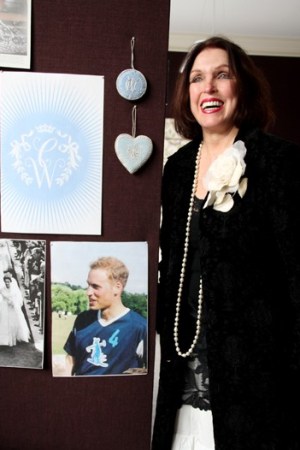 Here to show off her bridal collection, the designer, who divides her time between London and Memphis, set up what amounted to a mini-museum in her Crosby Street Hotel suite. Images of the Duke and Duchess of Windsor, Princess Alexandra and other royals were displayed throughout the space. A candid colorful photo of Prince William that Kerr shot a few years ago after a polo match in Sandhurst was featured prominently near his and his bride to be’s “CW” monogram. On another wall, a photocopy of a handwritten thank-you note George V penned as a 10-year-old to Lucy Kerr (who is no relation and who years later would serve as maid of honor at his wedding) was on view. He wrote to thank her for the ink she gave him that allowed him to write the letter. (The original letter was left at home for safekeeping.)

Another duplicate was a copy of The Jockey Club’s Warwick Vase that King Edward VII’s mistress Lillie Langtry won in the early 19th century. Unbeknownst to race officials, she competed in what was then a men’s-only race as “The Jersey Lillie.” Needless to say, during her New York-bound flight, Kerr chose “to carry in her arms” the more valuable pieces that were on view. “I thought of bringing some of the others but thought best not to,” she said, declining to pinpoint the value of her collectibles.

“I have lived in London for the last 20 years. I am a serious collector of royal memorabilia, with a particular emphasis on royal weddings dating back to Princess Alexandra’s wedding. I have thousands of pieces of laces,” said Kerr, delicately holding Honiton lace she had incorporated into one of her wedding gowns. “Look at that. Every stitch is made by hand. That’s a lifetime of work.”

Having collected thousands of pieces of antique lace, Kerr noted how in 1840 Queen Victoria reestablished the U.K.’s Honiton lace industry by hiring a brigade of lace makers to work on her wedding gown. Kerr said lace was used as a barometer of one’s wealth for centuries. In the 16th century, it was so coveted in Britain, there was an edict mandating that anyone who crossed the border with lace would be beheaded. More cunning thieves would stow away pieces by slicing open corpses that were being transported, she said.

Kerr’s trove of antique lace — anything 100 years or older — will never be used for her dresses. But even the vintage lace — anything under 100 years old — that has been used for gowns requires great care. Christening gowns made of 18th-century Brussels lace were another attraction, and there was a sampling of Kerr’s wedding dresses, which start at $2,500 and can go up to $50,000. “Today is really a tribute to the art of lace making. It’s no longer just for the royals and the clergy,” she said.