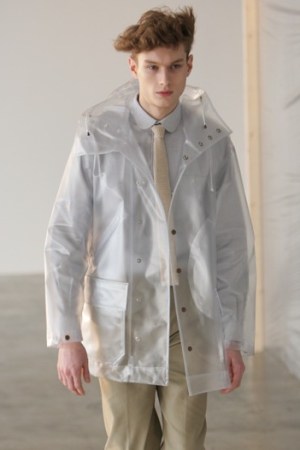 This story first appeared in the April 15, 2010 issue of WWD. Subscribe Today.

The site has been in development for several months, since Ervell was competing for the CFDA Vogue Fashion Fund, in which he was named a runner-up.

“The idea of setting up an online store was what I presented to the selection committee for the prize as my business plan,” said Ervell. “I really see this as central to my brand and its distribution going forward.”

Ervell has shown his collection in New York for three years, and everything he produces now will be available through the site patrikervell.com.

The Web design reflects Ervell’s spare and active aesthetic in its ample white space, limited verbiage and featuring of Flash, which keeps the product images in motion.

“Certain brands are more suited for this than others, and I think mine really is perfectly matched for it because my aesthetic has always been modern, and there’s no more modern presentation than an online store. It might be more challenging if you’re aspiring to an old-timey feeling. And I already see my consumer as a guy who’s buying primarily online. He’s not spending his weekends shopping. We already did a significant direct-to-consumer business just from our customers reaching out to us, and this is a logical next step,” said Ervell.

He is projecting for the site to be one of his biggest stockists. The largest was Opening Ceremony for most of the label’s life, but recently Barneys New York took over the top spot. Others include Fred Segal, United Arrows and Harvey Nichols Hong Kong.

“The last sales season was the biggest one yet. We added stockists and orders increased, especially from Asia,” Ervell said.

This spring he received his third consecutive nomination for CFDA’s Swarovski Award for Menswear.