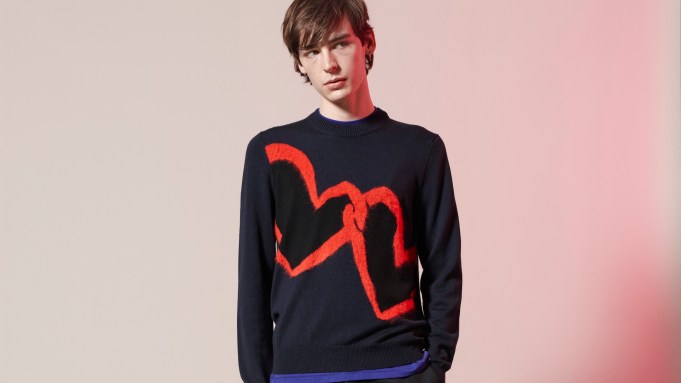 LONDON — Paul Smith is the latest British firm to streamline its labeling in a bid to simplify its offer in the eyes of consumers and strengthen the core brand.

WWD has learned that fall 2016 will be a season of “significant change” for the brand, which plans to consolidate its collections under two labels, Paul Smith and a new iteration of the collection PS by Paul Smith, which also will mark the launch of a new retail format for the company.

Paul Smith will include ready-to-wear, footwear and accessories for men and women. Smith’s handwritten signature logo will appear on the label and the collection will be presented on catwalks in London for women, and in Paris for men.

Biannual pre-collections will be presented in showrooms in London, Paris, New York and Milan.

The Paul Smith collection will be distributed through the brand’s retail locations worldwide and via a global network of wholesale partners, the company said.

PS by Paul Smith will be an expanded version of the existing collection, “accessible in terms of product, price and distribution,” the company said. It will include clothing, denim, footwear and accessories for men and women. The collection will feature “the signature characteristics of bold color, print and sharp tailoring in a simpler and more immediate way,” the company added.

PS by Paul Smith will be presented four times a year in Paul Smith showrooms worldwide. It will be distributed through wholesale partners and from a new shop concept that will feature neon accents, raw concrete and strong use of the new logo. PS by Paul Smith stand-alone retail locations will open from 2016 and a new logo, designed in collaboration with Fergus Purcell, will be applied to the merchandise.

Smith launched his business 45 years ago, and in the past has sold his collection under a variety of labels including Paul Smith, Paul Smith Jeans, Paul Smith London, Paul by Paul Smith and PS by Paul Smith, which, until now, has offered mostly street-inspired clothing for men.

The company’s annual sales are more than $320 million, and profits are in the double digits. Earlier this year, Smith also reorganized his design studio, naming the company’s first creative director, Simon Homes. The men’s and women’s teams now sit next to each other, sharing fabrics and working in parallel.

Smith remains the majority shareholder, with a 60 percent stake in his namesake company, while Itochu, his longtime Japanese licensee, holds the remaining 40 percent.

Paul Smith is not alone in reorganizing its labeling strategy. Earlier this month, Burberry revealed plans to consolidate its three labels — Prorsum, Brit and London — under the sole Burberry name. Those changes are due to be completed by the end of 2016, and the new Burberry label will begin landing in stores next summer.

Christopher Bailey, Burberry’s chief executive officer and chief creative officer, said by unifying the three lines under one label, Burberry can offer a more consistent experience of the collections.

“Those categories were created when Burberry sales were 70 percent wholesale and 30 percent retail. Now it’s the opposite. The key is to present a cohesive brand experience,” he said, adding the change would drive productivity and create a simpler, more intuitive experience for the customer.

Smith’s and Burberry’s moves to consolidate echo that of Marc Jacobs and Dolce & Gabbana. These brands have folded their secondary lines into their main collections, in a bid to move upmarket and fortify the brand name of each collection. Donna Karan International, meanwhile, shuttered its Collections business to focus its operations on the DKNY brand.