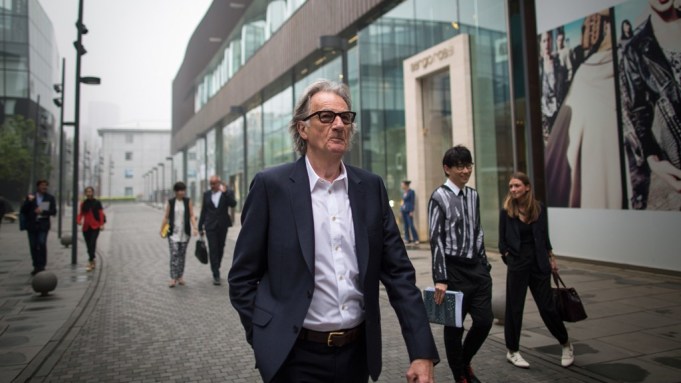 BEIJING — Sir Paul Smith doesn’t seem totally convinced that his second foray into Mainland China is going to be a smashing success. But he also doesn’t seem too worried.

“I suppose the biggest challenge is the fact that we’re not as well-known” as the larger designers already in China, said Smith on the official opening day of his new flagship here. “So it’s very much about finding the customer that is confident enough to wear something that doesn’t shout out that it equals money. It’s more of a discerning customer.”

That approach might be timed right. A report released this week by the Zurich-based Julius Baer Wealth Report notes that Chinese consumers are increasingly choosing understatement and quality over logos and brands. The report said established brands such as Chanel, Louis Vuitton, Gucci, and Christian Dior continue to dominate Chinese luxury sales, but consumers there are also open to new brands and are “savvier about the relationship between quality and price.”

Smith, along with distribution partner Bluebell, last attempted to open stores in Mainland China in 2002, a venture that lasted five years. Bluebell “persuaded us to open,” Smith said. “They already had a successful business with Paul Smith in Hong Kong and they thought it was time to go into Mainland China.” But the stores were done in by larger brands with extensive marketing campaigns, Smith said. His 2002 venture “was too early and too secret, in a way.”

This time, with new distribution partner ImagineX, “the signs have been great,” Smith said. The 3,800-square-foot Beijing location has been open since May 6, and sales returns are already “over budget.”

A Paul Smith store opened in Tianjin late last year, a 5,000-square-foot megastore is planned for Shanghai sometime in the next few months and a Chengdu unit is set for later in the year, an ImagineX spokesman said. The company expects to open as many as 20 stores in top-tier Chinese cities in the next five years.

The Beijing store is situated in Sanlitun’s trendy Village North area, surrounded by stores such as Alexander Wang, Montblanc and Giorgio Armani. Like all of Smith’s other stores, this one has its own personality. Large glass windows frame a pink, yellow and orange color-blocked-style exterior. Inside, the two-story shop is an eclectic mix: an 1850 Dutch painting of a snake signifies the Chinese Year of the Snake; mosaic tile in a side hallway is inspired by Paris; a Fifties-style sideboard; a reproduction antique Chinese cabinet, and hundreds of photos, posters, and works of art from Smith’s personal collection line the walls.

The challenge, just as in 2002, is to convince Chinese consumers to see beyond the logo. The fashion market in China was conquered by what Smith describes as “the more established, more marketing-led companies.” Their success was based on the fact that the wealth in China “is relatively new,” he said, “so I think a lot of the shops that have an obvious logo and an obvious identification did well because it was sort of like a sign that you were doing well.”

Smith mainly seems to have his eye on the younger crowd for the future of his collections. “What’s interesting now is there’s a whole generation that’s grown up without these big brands who are now older,” he said. The 12- to 29-year-olds “think Paul Smith is pretty interesting,” he said.

In fact, after posing for photographs at his Sanlitun store, Smith gave an hour-long lecture and slide show to a group of 300 Beijing fashion and design students, describing how he found inspiration through his photography and the colors around him. One design of a man’s blue suit came from a photo he took years ago of a security guard at Beijing’s Forbidden City.

“You have to be different,” he told the students, who sat in silence, listening to a simultaneous translation on their headphones. “Question things all the time.”