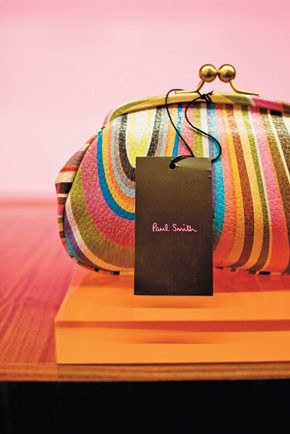 A franchised Paul Smith store quietly opened its doors in October in a gracious 1,900-square-foot, two-story Cape Dutch-style house in the laid-back but fashionable Johannesburg suburb of Parkhurst. Less than a month later, the designer opened a franchised Cape Town store, this time in the new prestige wing of the V&A Waterfront known as the Millionaire Mile. The shop is alongside such labels as Louis Vuitton, Gucci and Burberry.

The brand’s Johannesburg store exhibits many of the quirky touches for which it has become known. At street level, there is no visible signage, nor is there any storefront window to speak of. The only indication that it is a Paul Smith shop is the hot pink glass sheet hanging from the second floor. And even that is something only those in the know would recognize — the idea was inspired by the Paul Smith shop in Los Angeles, which is housed in an old film studio painted pink.

Yet a mere 12 days after opening, the Johannesburg flagship had almost sold out of men’s shirts and had to reorder.

Anthony Keyworth and Richard Shaw, the franchise holders of Paul Smith in South Africa, said sales have exceeded even their own optimistic forecasts. “It’s fantastic and extremely encouraging,” Keyworth said, “considering our shirts start at around ZAR 1,650 [$250] and a suit from the London line, your classic and elegant business wear, sells from ZAR 7,500 [$1,136].” Prices, he added, are consistent with other Paul Smith stores around the world. Shaw said, “If anything, there is a 2 percent differential.”

Finding stylish, well-made and attractively priced men’s wear has always been a challenge for sartorially conscious South Africans. The South African male himself is typically stereotyped as a sports-mad, shorts-clad species. “We felt sorry for South African men,” Keyworth revealed. “The choices they had were limited.”

Though steeped in the English tradition of tailoring, Paul Smith exemplifies British quirkiness. Keyworth said, “What differentiates Paul Smith, I believe, is that there are elements of humor present in the clothes that people respond to. He makes clothes for both men and women that make you look gorgeous, that are taken seriously because they are of the highest quality, and that have a heart.”

While the term “classic with a twist” has been used so often that it has become a cliché, Keyworth prefers to describe the Paul Smith sensibility as “serious with a beautiful secret.”

Keyworth said the women’s line is also doing well, although customers are probably split 60-40 in favor of men. Many women, however, come into the shop to buy for men as well as for themselves. The shop features a complete collection of current-season merchandise from all Paul Smith lines: for women, Pink for jeans, Black for casual and the dressier Blue, and for men, Red Ear and Jeans, PS, which Keyworth describes as “everyday smart casual and good value,” London suits and Mainline. Complementing the clothing is a complete range of accessories, from pajamas and underwear to shoes, socks, belts and ties and scarves and bags, many of them featuring the iconic Paul Smith multicolored swirl print.