The designer opened his major show with a flurry of colored socks, a whole lot of creative clutter — and his indestructible charm. 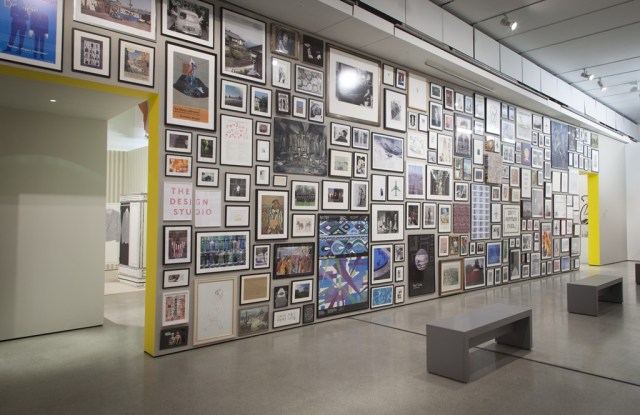 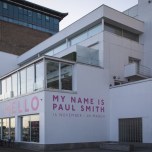 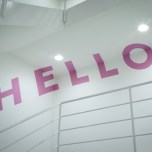 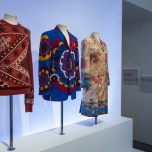 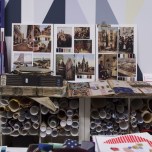 Sir Paul Smith opened his major show at London’s Design Museum this week with a flurry of colored socks, a whole lot of creative clutter — and his indestructible charm. “Whoever asks a question gets a prize,” said Smith during a press conference before the show opened, tossing striped socks and notebooks at inquisitive journalists.

Later, he methodically walked them through the busy, buzzy exhibition, which aims to capture and distill the creative juice of the Nottingham shopkeeper who built a $650 million global business on an overactive imagination — and lots of hard work.

The show is less about Smith the fashion designer than it is Smith the multitasking creative: It showcases his photography, store interiors, cluttered London office, art and poster collection and — finally — the run-up to his latest men’s show in Paris, which was shot by Sony in 4K, or four times the detail of full HD television.

“We could have created about 10 exhibitions,” said Donna Loveday, who curated “Hello, My Name Is Paul Smith,” which opens today and runs through March 9 at the Design Museum, overlooking the Thames. “The key thing for me was: ‘Where does he get his ideas from?’ I was so curious.”

Loveday aims to answer that question with a fast-paced show that takes viewers through a replica of Smith’s first shop, a windowless box measuring 10-by-10 feet that was only open on weekends. Smith spent the rest of the week working at various retail jobs to bankroll his men’s wear dream.

She has also re-created a cardboard model of his first “showroom,” a hotel room in Paris that welcomed just one buyer on the very last day — who luckily for him placed an order. There is also a re-creation of Smith’s cluttered office in Covent Garden, wallpapered with photographic views from his actual office and packed to heaving with random objects, including toy robots, books, a pink vacuum cleaner, a rug in the shape of a leaping hare, a plate of silicone fork and spaghetti and a fat green Apple computer from what seems like 100 years ago.

An accompanying note reads: “The office is the equivalent of my brain. I have never sat at the desk,” because there is no room. The colorful mash-up is another Smith signature: For years, fans of all ages from around the globe have sent Smith random objects — some homemade, others bought or found — for his office.

“We are astounded by the post every day,” he said. “I just had five huge cartons of spinning tops sent to me,” with a note saying how much he would like them, said an amused — and bemused — Smith.

One room is dedicated to Smith’s photography — the son of an amateur snapper, he has been taking pictures since he was 11 years old — and how his images of seemingly minor details — tiny mosaic tiles or the black-and-white stripes on a contemporary sculpture — can morph into the print on a jacket or dress.

“It’s about looking and seeing, and the surprise of looking at nothing, that then turns into something,” he said during the tour.

Another room has an entire wall covered in 70,000 colored buttons. The space is dedicated to Smith’s various stores and flagships around the world, all of which are different, while another room features the designer’s various collaborations with bicycle, automobile, ceramic, snowboard, footwear, photography and rug companies.

There is also a hall given over to his favorite men’s and women’s designs over the years — he still turns out 28 fashion collections each year. One of the biggest spaces in the show is a re-creation of the fabric and print research studio, where designers pore over sample books or create Smith’s signature stripy patterns by wrapping yarns or threads around pieces of white cardboard to see how well the colors sit next to each other physically.

The main hall is covered in the artwork, photographs, movie, concert and film posters that he’s been collecting since he was a teenager, while at the back of that room are life-size paper cutouts of the designer, where visitors can have their pictures taken “with” him.

Smith’s wife, Pauline, also figures big in the show: There’s a picture of the happy couple — who met at the very beginning of Smith’s career in Nottingham when she was a fashion tutor at the city’s School of Art and Design — inside the replica of that tiny first shop and a note that reads: “This is dedicated to Pauline. Without her, this would not have been possible.”

Clearly, all his talk about staying humble in life and work is genuine. “This morning, he was tidying the merchandise in the museum gift shop and talking to people,” recounted Loveday. “He said he couldn’t help himself. ‘It’s the shopkeeper in me,’ he said.”