A new book and museum exhibit traces the designer's understated vision for his $650 million business. 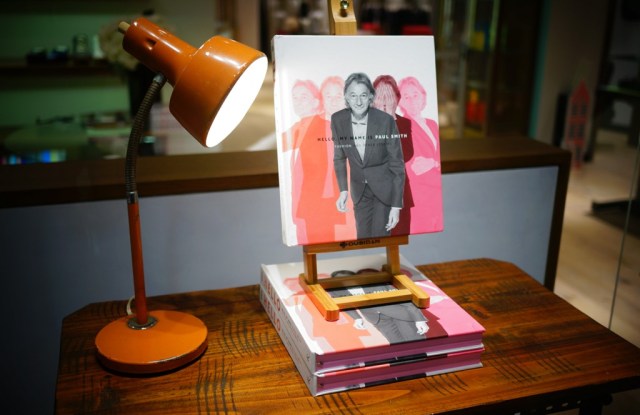 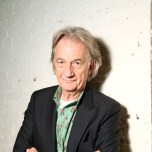 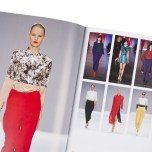 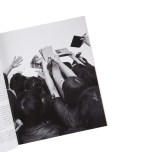 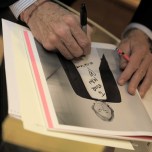 Sir Paul Smith is a rare bird in the fashion world: an independent designer who has built a $650 million global business despite an ethos that values creativity over commerce, sincerity over ambition.

“We’ve always made good profits and have never gone backwards, but we approach it in such a different way. It’s always fun and always relaxed and always quirky. We never take ourselves too seriously,” said Smith during an interview prior to a speech he made at New York’s NeueHouse on Tuesday evening. The designer was in town to promote a new book about his philosophy on design, business and life, called “Hello, My Name is Paul Smith: Fashion and Other Stories.”

The hardcover tome, published this month by Rizzoli New York, coincides with a museum exhibition, also titled “Hello, My Name is Paul Smith,” that will go up at the Design Museum in London from Nov. 15 through March 9.

“It’s not a retrospective,” insisted Smith. “It’s an exhibition about how I started and how I work. It’s really about showing people that they can start from humble beginnings and progress, because in today’s world everything is about big money, networking, fashion shows, hedge funds, financial institutions. It doesn’t always have to be that way. It can come from the heart as well.”

The book and exhibition trace Smith’s career from its cramped beginnings in a 12-by-12-foot boutique in Nottingham, England, that he opened in 1970 with his girlfriend, and now wife, Pauline Denyer. Called Paul Smith Vêtements Pour l’Homme, it was only open on Fridays and Saturdays, so that its proprietor could work other jobs the rest of the week to pay the bills. Among those jobs was working as a freelance designer for a label called Lincroft’s, which the book’s authors divulge allowed Smith to acquire the first in a series of Porsches. (The book was written by Donna Loveday and Deyan Sudjic of the Design Museum, and edited by Alan Aboud, a creative director for Paul Smith. Smith is credited as an author but he said — honest as always — that he had nothing to do with the book’s content and had not yet even read it.)

“I never compromised my shop,” Smith told the crowd at NeueHouse, “which was full of things that nobody really wanted. Nobody really appreciated it. Then slowly, slowly they did. So keep your purity, don’t compromise on it. But also secretly do other things to help pay the rent.”

That’s a lesson many young designers follow today — often from economic necessity — by leasing out their talents and brand equity to fast-fashion giants for collaborations and consulting gigs.

Smith himself eventually graduated to larger stores, opening a shop in London in 1979 and then New York in 1987. He staged his first men’s fashion show in Paris in 1976 in the apartment of friends Alan Cleaver and Keith Varty, who would later design the Byblos label.

In the U.S., which accounts for 6 percent of sales, Paul Smith operates five full-price stores and one sale shop. The brand is wholesaled to 35 accounts here, with the largest partners including Barneys New York, Neiman Marcus, Saks Fifth Avenue, Nordstrom, Bloomingdale’s, Scoop and Shopbop/East Dane.

In August, the company expanded its store on Albemarle Street in London’s Mayfair and opened a new unit on Beak Street in London’s Soho. New company-owned shops are slated to open over the next few months in Hamburg, Munich, Sydney and Terminal 2 at London’s Heathrow Airport.

In May, Paul Smith’s China distribution partner, ImagineX Group, opened a flagship in Beijing, with stores slated for Shanghai and Hong Kong in coming months, part of a larger retail expansion planned for that market.

Men’s generates 80 percent of Paul Smith sales, and women’s is 20 percent. Tailored clothing and accessories are the biggest categories for both genders. Smith owns 60 percent of the Paul Smith business, and his Japanese partner owns 40 percent.

“I think we are quite unique in the world because we’ve never borrowed any money — ever,” said Smith. “It’s a different headset really. It’s a lot more humble; it’s a lot more about the job rather than about the money. When you are a big financial institution or part of a group, then obviously the shareholders are looking at the bottom line the whole time and want you to progress all the time. Luckily, we have always progressed but there hasn’t been pressure on the shoulder.”

In his teens, Smith was an avid racing cyclist, and he dropped out of school at the age of 15 to pursue his dream of becoming a professional in that sport. A serious car accident sent him to the hospital for three months and ended that pursuit. Smith wound up working in an apparel company’s warehouse; he saved up 600 pounds and fatefully went into retail and then design.

“What was lovely about being a cyclist is the importance of teamwork,” observed Smith. “The importance of helping someone in a race who is good at hill climbing one day and the next day it’s about someone who is very good on the flat. That applies to all of us in this room because we all work with people who have strengths and weaknesses — and I learned a lot about that from cycling.”

Discussing his design process, Smith underscored the importance of curiosity and a wide-eyed openness to the ubiquity of inspiration. He showed slides of beach huts that inspired sweater patterns, and architectural interiors that influenced shirt-and-tie color combinations. In 1982, a bus that was wrapped in a photo of Florence’s Duomo sparked Smith’s enduring interest in photo prints, now a signature of the brand, used on shirts and bags.

Asked what goals remain for the brand, Smith is modest in his ambitions. “Continuity, really. I love the fact that we’re very stable, we’re a very polite company, we’re a very solid company,” he answered. “We’re expanding at our own pace. I don’t desire a large quantity of money, so it’s fine at the moment.”