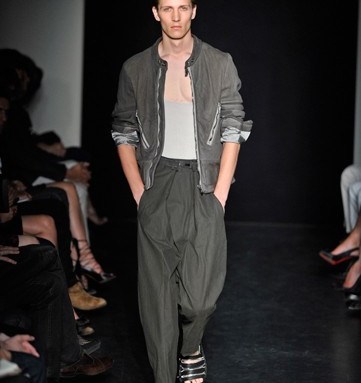 PARIS — The buzz among buyers at the men’s wear shows in Paris, which ended Sunday, was pared-down elegance — along with reduced prices and tightened brand assortments in tune with the economic crisis.

“We have generally seen designers dropping their prices between 10 to 12 percent, which the market demanded and which was a shrewd move,” said Richard Johnson of Harvey Nichols.

Retailers said budgets for Paris collections were down only modestly, but monies would likely go to fewer labels: ones with proven sell-throughs or strong fashion propositions.

Hard-edged looks were swept away by soft and flowing fabrics, neutral colors, cropped trousers and an air of easy sophistication that pervaded most shows. Fashion houses made an effort to appeal to constrained budgets, and as a result paid more attention to style and pricing in order to be more reassuring, buyers said.

Hirofumi Kurino, from Japan’s United Arrows, said Parisian brands would get bigger play “because they are more interesting…and are very positive about creating new things.”

Here is what buyers had to say about the spring collections:

Hirofumi Kurino, creative adviser, United Arrows, Japan: “My budget is 10 percent down from last season. This is not directly connected with the economic situation, but because I want to concentrate on more focused brands. I increased my budget for good, positive collections and most of all for brands with good sell-through, a good example being Dries Van Noten. [Her other favorite shows were Lanvin and Comme des Garçons.] Even during a depression, people who love fashion like to dress well and cultivate their own style. Men are wearing clean white shirts and are shining their shoes. This is the essence of being stylish and not trendy. Let’s forget the word trendy.”

Sarah Lerfel, buyer, Colette, Paris: “I saw a lot of short or wide pants, superlight sleeveless jackets, new subtle colors and belts,” said Lerfel, noting standout collections included Raf Simons, Lanvin and Adam Kimmel. Lerfel said her budget remained on par with last season and is likely to add newcomers such as Umit Benan. “Alexis Mabille also offered an interesting collection, which was less androgynous and more mature than what he has done in the past. We have had a positive season,” she said. “I am confident for 2010.”

Eric Jennings, vice president and men’s fashion director, Saks Fifth Avenue: “There was a lot of sheer, transparency, mesh, tulle overlays. Trends that emerged in Paris included the trouser where it’s made of a suiting but with an elastic hem, the short sleeve suit jacket and the lightweight motorcycle jacket. In Milan, they addressed pricing in a more proactive way, to their benefit. Paris is more about the art. The mood in Paris is maybe more somber. I saw more black and white than gray. When there was color, it was really vivid. The Rick Owens Goth was one story. There was also this explorer story, with the wrinkled effects, the dusty khaki, natural linen story, like at Kenzo. Raf Simons did a good job of making some commercially viable suits in his collection. Junya Watanabe was a personal favorite. Dries Van Noten showed some unique colors and prints. The one trend that went from Milan to Paris was short pants. You saw ankles on every runway, which is great for the shoe business.”

François Schweitzer, head of retail fashion, Chalhoub Group, Dubai: “We are looking for more concrete styles, so we liked Paul Smith for its easy-to-wear daywear, which is sophisticated, but with a twist. Even though customers have less money, they still buy emotionally if they see a particular color or texture they like. That’s why we were attracted to the blue hues of the Paul Smith collection. We can’t deny there is a recession, so we cut our budget accordingly, but not by a huge amount. We are buying fewer quantities and focusing on tops and shirts, because customers can easily wear them with jeans. But we are also buying shoes and accessories; anything that has a striking color or shape.”

Josef Voelk, owner, The Corner, Berlin: “There is a return to quality, so these days you cannot fool customers with gimmicks. As a result, we prefer brands that are special, such as Balmain, Balenciaga, Adam Kimmel and Rick Owens. We liked Yves Saint Laurent very much. Stefano Pilati has a very good eye for detail. We thought the cut of the clothes was wonderful, and so was the quality. What we are noticing among clients is a trend toward easy-wear and more casual clothes. We didn’t cut our budget compared with last year. We didn’t do it because the labels we work with don’t impose high budgets. We are lucky that locals in Berlin still have buying power.”

Tommy Fazio, men’s fashion director, Bergdorf Goodman and Neiman Marcus: “I’m loving the new proportions in Paris, the easy clothes that look so new, fresh and exciting. Black for summer is so refreshing and modern, while color and texture are also such a big part of the season. Lanvin struck a cord of elegance. Dries Van Noten also went back to his roots and showed some of the best texture, color and fabrications yet. Junya Watanabe brought to life a collection of intellect and art while showing a wearable and exciting combination of American sensibility with an artist’s touch. Kris Van Assche really put his mark on Dior this season and showed his best collection since he took over. I can’t wait for all of it to hit the stores.”

Kevin Harter, vice president of fashion direction for men’s, Bloomingdale’s: “The shows really emphasized dressing with stylish ease. Pants were fuller and there was such a variety of them — cuffed, rolled, one pleat, two pleats, drawstring. The proportions of jackets were much more relaxed with beautiful fabric choices. We saw so many beautiful loose knits under jackets and again many choices — lightweight cardigans, round necks, V-necks. Printed woven shirts were also key, with very sophisticated patterns. Athletic influences continue with vibrant colored nylon and fleece shorts. There was fantastic color — blood orange, bright blues, yellow. I truly believe these trends will lead men to update their wardrobes and that is terrific news for the department stores. Favorite shows included Junya Watanabe, Louis Vuitton, Dunhill and Paul Smith.”

Lanita Layton, vice president and general merchandise manager for men’s and men’s footwear, Holt Renfrew: “For us, Lanvin was the most impactful show with exquisite tailoring and draping, subtle use of color, luxurious fabrications in well-cut designs. Paul Smith had a surprising new take… less of the dandy, more modern. Outerwear was strong through all shows with great new variations. The major trend is casual chic, a certain modern elegance. Designers have really concentrated on editing their assortments, with a focus on quality in fabrications and fine details. Shows were concise. Keeping with the times, styling was more subdued, but there was a smart use of color to attract the eye as well as new proportions. Other key directions included draping in pants with a cropped jacket in fine tailoring, or a slim well cut pant, cropped to the ankle, with a double-breasted blazer. We are still cautious regarding budgets, as there is nothing at this point economically to point to a dramatic change in the near future. “

Richard Johnson, head of men’s wear buying department, Harvey Nichols: “The Paris shows were better than the shows in Milan — more sophisticated. We really enjoyed Dries Van Noten. We also liked Balmain’s second men’s collection. Lanvin was excellent. Kim Jones did a great job at Dunhill. In this climate designers should focus on their craft, their specialty. For that reason we are thinking about adding Rick Owens. His leathers and knits are some of the best in the market. We have made a modest reduction in our budget; however, our designer brands are on par with last season. We have redefined our mix and put more money into fewer labels, building those brands with a few new labels to keep the offering fresh. We are feeling very confident.”

Tancrède de Lalun, general merchandise manager, women’s and men’s apparel, Printemps: “The strongest shows were Dries Van Noten, Lanvin, Dior, Kris Van Assche and Rick Owens. This season, the subtle style messages were: a new jacket construction for added lightness such as at Dior; an underling desire for travel at Dries Van Noten, and a coherent silhouette which was underscored at Lanvin. In general the silhouette is more relaxed. Shoulders are much softer and jackets are not as slim; trousers are also worn more loosely. There has to be a balance between creativity, brand notoriety and price versus quality in order to stimulate sales and not just desire.”

Lenka Tsitsishvili, owner, Pierrot LeFou, Tbilisi, Georgia: “The spring collections are better this year. I really liked the T-shirts at Comme des Garçons with the knit effect and the jeans at Junya Watanabe, which are very good for summer. I am going to buy the Comme des Garçons T-shirts and the jackets from Ann Demeulemeester, to mix together. I also liked Lanvin and Yohji Yamamoto. I have kept my budget unchanged this year.”