Peter Bacanovic Has Slew of Initiatives for Fred Leighton

With nary a hair of his signature coif out of place, Peter Bacanovic is working on another rebuilding project: Fred Leighton.

By Sophia Chabbott and Rachel Brown and Matthew Lynch on November 3, 2008
View Slideshow 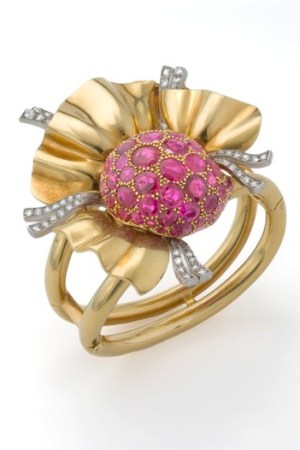 With nary a hair of his signature coif out of place, Peter Bacanovic is working on another rebuilding project: Fred Leighton.

Several years after the Merrill Lynch broker was fired, banned from the securities industry and completed a jail term for insider trading, Bacanovic is optimistic and even has a sparkle in his eye — possibly reflecting back the thousands of carats of diamonds surrounding him.

Bacanovic, who signed on as president of the 37-year-old estate jeweler in January, has big plans for a firm that has been in turmoil this year. He aims to bring the company out of bankruptcy within eight to 12 weeks; will open a third store, in Beverly Hills, this month, and talks of opening stores in Asia and the Middle East in the near future.

Currently known solely for antique jewelry, the firm also will inaugurate a Fred Leighton collection to be sold in its stores and distributed in exclusive wholesale accounts. A new Web site, which will exhibit the company’s wares and offer insight to its curating, will launch shortly. Advertising, marketing and promotional initiatives are also in Bacanovic’s blueprints.

“We’ve been working hard to set the stage for the fourth quarter and to have all of these elements work together in concert,” he said.

Fred Leighton was founded in New York by Murray Mondschein, who later changed his name to Fred Leighton. Leighton brought vintage fine jewelry to the forefront of fashion at a time when it was customary for jewelers to break apart old pieces for reuse of the materials. Throughout his career, Leighton sought pieces ranging from Victorian diamond jewelry to Art Deco wares for his 2,000-square-foot Madison Avenue emporium. In 1998, he opened a second, 1,800-square-foot location in The Bellagio in Las Vegas.

In 2006, Ralph Esmerian, a highly regarded jeweler and art collector whose personal jewelry and objet d’art collection has been heralded as one of the world’s finest, acquired Fred Leighton in cooperation with Bacanovic’s former employer, Merrill Lynch’s Global Asset Based Finance Group. The two men met through Helen Davis Chaitman, a Phillips Nizer attorney who did work for Esmerian.

The house of Leighton and Esmerian has been in flux over the past several months, however. In March, Merrill Lynch sought repayment of the $183.3 million it had loaned to Esmerian, who at the time had paid back only $10 million. To repay the loan, Merrill Lynch helped facilitate an auction, called “Rare Jewels and Gemstones: The Eye of a Connoisseur,” at Christie’s of Esmerian’s most prized pieces, including several large, rare gemstones and French crown jewels. But Esmerian wanted to sell the pieces, which were initially put up as collateral, through Leighton, saying he had buyers lined up for several of them. The sale, which was slated to take place on April 15, was halted when Esmerian put Fred Leighton holdings into Chapter 11 bankruptcy protection. The auction eventually was aborted entirely, but some pieces were sold privately by Christie’s, such as the Empress Eugenie brooch bought by the Louvre.

On Oct. 1, in federal bankruptcy court in Manhattan, Esmerian and his fellow debtors filed a complaint asking a judge to void Merrill Lynch’s security interest in the Fred Leighton collections. If its security interests were to be voided, the financial firm would lose its rights to seize and sell the collections.

The 75-page document alleges Merrill Lynch structured the two parties’ business relationship so as to “maximize its own short-term profits while at the same time dooming the Fred Leighton acquisition to failure.” Among other charges, Esmerian and the debtors accused Merrill Lynch of breach of contract, negligence and libel over the course of the two companies’ association. Merrill Lynch filed its own complaint for judgment the following day, in which it reasserted its security interests in all Fred Leighton assets. The firm accused the debtors of failing to make payments on loans it extended and of still owing approximately $192 million.

The case continues, but Bacanovic said the claim would have no bearing on the firm’s expansion plans.

“We are open for business,” said Bacanovic, who, while at Merrill Lynch, had many clients who were in fashion and who has dabbled in the fashion world as the creative director of several Leiber ad campaigns featuring socialite Vanessa Getty. “We had a strong summer and have come off of a big winter and spring. In these fearful times, it’s important to address the fact that Fred Leighton is a healthy operating business.”

The Beverly Hills store should help prove that. The 1,600-square-foot store, located at 313 North Rodeo Drive, is slated to open in the middle of this month. Nicoló Bini of Beverly Hills firm Line Architecture redesigned the former Celine space, which is done in a modernized Art Deco design.

After passing through a hammered-bronze and glass storefront, customers will be led through the foyer, which has 27-foot ceilings. The foyer displays a pair of very rare Lalique winged women statues from Esmerian’s private collection. A chrome and oak portal leads to a bright exhibition space with 13-foot white metal ceilings and diamond-patterned white pony hair floors.

The nave of the store has cases of oak, glass and steel; chocolate brown carpeting, and chrome slats that ascend the walls and meet on the ceiling. Most of the products inside the cases will retail from $5,000 to $1.2 million. At the rear of the store, there is a room with a residential feel fostered by bookshelf-like cabinets, couches and lowered ceilings.

Befitting a fine jewelry store that caters to Hollywood clients — Nicole Kidman, Sarah Jessica Parker and Michelle Williams have worn the firm’s jewelry on the red carpet — there’s a VIP entrance at the back. The store will be the stage for parties during awards season.

Bacanovic estimated that the Los Angeles store’s sales would be on par with those of the New York flagship, but declined to reveal figures.

The store has an area for exhibits, something Esmerian initiated when he acquired the company. There are plans to have more shows, not only in the firm’s three stores, but across the globe, as well as a museum exhibition and book. For example, there will be a showing of Leighton jewels during Art Basel Miami Beach Dec. 4 to 7 at The Webster, the buzzed-about boutique that also sells looks by designers such as Azzedine Alaïa, Prada and Lanvin.

The new Web site, fredleighton.com, will launch in tandem with the opening of the Beverly Hills boutique, and was produced by Jalou, the French firm that publishes L’Officiel. The site will be educational and offer information about the value and provenance of the jeweler’s rarefied pieces, such as those from the Victorian, Art Deco and Art Nouveau periods. Jewelry exhibits also will be on the site.

There is also a new advertising campaign, which will run in local newspapers and glossy magazines as well as The New York Times and The Los Angeles Times. On Saturday, a striking 18-by-40-foot billboard on Sunset Boulevard was unveiled.

“I wanted people to react. I want it to stop traffic,” said Bacanovic of the billboard, a project about which he seems most excited. “Fred Leighton is a wonderful, untarnished name. We’re promoting the concept that old is very new again.”

But given the global economic crisis, sales in the past few months admittedly have been lagging. Esmerian said about 40 customers used to walk into the Madison Avenue store each day. Now, it’s about 10. He also said more people are coming in to sell their pieces.

“In this day and age, jewelry is not something that people need, relative to shelter, food and holding on to a job, etcetera,” said Esmerian, who noted business has fallen off of late but that, as a company, it’s important to charge through. “We’re excited because California is an important marketplace, not just for native Californians, but for the Asian and Middle Easterners that love the climate and energy of that world.”

To better cater to that clientele, there are plans to open freestanding stores in Qatar, Dubai and Hong Kong by mid-2010, both independently and through partners. Each store will have a distinct ambience, reflecting the nature of its surroundings.

Bacanovic said the current inventory could carry the business at least nine more years, due to the limited nature of the gems on offer and the rarefied clientele. Nonetheless, the firm aims to bolster its assortment with a Fred Leighton collection of new pieces, which will have more accessible opening price points of $2,000 going up to the millions of dollars. The line, which will launch by 2010, will be wholesaled selectively and available in the firm’s store network.

“Our foundation is antique jewelry. It’s not as if we’re creating [designs that] you can make a thousand pieces of,” said Esmerian.