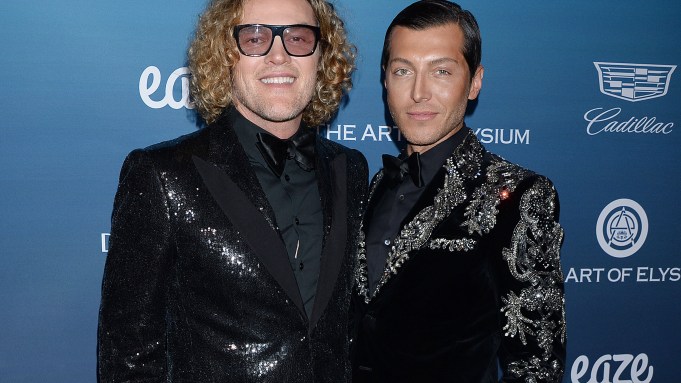 The designer was in the midst of last-minute fittings, stopping to chat with people and checking on the stage ahead of the presentation of his Dundas label’s D7 collection. Models walked down the runway during a presentation Saturday evening as part of the Art of Elysium’s Heaven Gala, held in Koreatown amid a busy evening throughout L.A. in the run-up to Sunday’s Golden Globe Awards.

“It’s such an amazing experience putting a show together here,” Dundas said as he walked from the main gala area to the back of the house, where the pieces were still being unpacked. “When I see brands doing shows in different countries, I think that’s an undertaking with the staff and all that. We’re still in the initial part of the story of our house, but here we are. We’re doing it.”

The Norwegian designer, whose résumé has included time at Roberto Cavalli, Emilio Pucci and Emanuel Ungaro, now oversees his namesake label, which he’s molding to reflect broader changes across the fashion landscape.

D7 is a mostly eveningwear drop with some references to old Hollywood, particularly fitting given the weekend’s big show. Although the timing, Dundas said, was purely coincidental.

“I grew up watching old Hollywood movies, Forties and Fifties. My dad loved them,” he said pointing to inspiration from Katharine Hepburn in “The Philadelphia Story” and the collection’s final look referencing Michelle Pfeiffer in “Scarface.”

That was all mixed in with African batik prints done in embroidery and giraffe prints.

The collection is a lot of black with a few infusions of color, in a move — at least briefly — from Dundas’ use of white in his work.

D7 reflects a mindset looking to keep up with the current state of the market, one in which collection drops have become part of the lexicon, displacing the traditional fashion calendar release cadence.

To go hand in hand with that, the designer in April launched his traveling flagship concept, tapping Los Angeles as the first city for the roaming store, coinciding with the annual Coachella Valley Music and Arts Festival. That was followed by another in Greece over the summer and one during New York Fashion Week. Europe is a market ripe for the temporary flagship concept, Dundas added.

“For us, as a new brand, it’s been a great way to understand the client, to understand the girls more and also take little baby steps,” he said of the retail strategy. “It matches our aesthetic as well. We’re a little bit nomads ourselves. Everybody always says they never know where to find us and I don’t always know when I wake up where we are because we’re constantly on the road just out of practicality and because we love doing that. Doing the shops just matched our DNA, even from the point of view of taking inspiration from different places and then understanding the different markets. It’s definitely been a key benefit.”