Come Jan. 28, the works of Mapplethorpe will be reexamined once again. 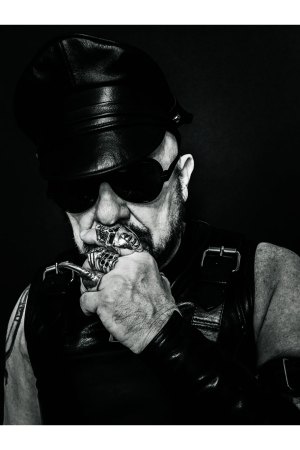 The works of Robert Mapplethorpe are oft revisited — cited as a source of inspiration for a ready-to-wear collection practically every other season. Come Jan. 28, they will be reexamined once again — this time through the eyes of Peter Marino.

This story first appeared in the January 20, 2016 issue of WWD. Subscribe Today.

In an effort to keep the work of Mapplethorpe alive and vibrant, the foundation that owns the late photographer’s oeuvre commissions what it calls “curated exhibits.” Past exhibits have been overseen by the likes of Cindy Sherman, Hedi Slimane, Sofia Coppola and Bob Wilson. Now it’s Marino’s turn, with a show at the Galerie Thaddaeus Ropac in Paris.

“I’m excited, because not every architect is asked by the Mapplethorpe Foundation to do a show. And it’s cool because they expect each person to show a different side of the artist, and I think if it’s a great artist, like Mapplethorpe, then there are many, many sides,” Marino says of the exhibition, which is scheduled to run through March 5.

Although Marino insists he met Mapplethorpe only once at a party and it would be pretentious to say he really knew him, the two men share creative connections, like a mutual love of sculpture.

Mapplethorpe once noted that had he been born “100 or 200 years ago,” he might just as well have been a sculptor, but that photography was “a very quick way to see, to make a sculpture.”

Marino, who has been molding and collecting bronze for many years, agrees. “His compositions are very classical, but the way he takes pictures of human beings, the texture of their skin, always beautifully lit — he really did treat them like sculpture. They are superarchitectural, too.”

Perhaps that’s why he feels so drawn to the images, he muses, the first of which he acquired some 25 years ago. “It was a wooden box full of tulips, which were lit in the afternoon and there was obviously a window that had mullions, and the shadow of the mullions was just offset by a teeny bit. I’ve since bought three more from that series, [the] same-day shoot. It really is architecture, with the light coming through the window, and the pattern of the mullions on the tulips and the box,” he says, guessing the total numbers of Mapplethorpe images in his private collection to be about 140 pieces.

His personal collection was shown in a separate exhibition at the Bass Museum in 2014 and is set travel to Tokyo and Osaka in 2017.
With the new show at the Ropac Gallery, Marino says he wishes to set the record straight.

The artist’s much-exhibited portraits, although “really good,” were “hardly Mapplethorpe’s primary interest,” Marino observes. “Because, to be brutally frank, the three books that he did in his lifetime, the ‘XYZ Portfolios,’ were about sex, flowers and male nudes, and you have to assume if an artist only did three books in his lifetime, he’s going to do them on things he really, really cares about. That’s all I’m saying.”

So the first room of the Paris exhibit will show a selection of Polaroids — some of sex scenes, others “100 percent abstract,” as Marino details. “There are pictures which are practically all white with two black dots. Very few people will realize the modernity of his abstract work. And I think if you just see my first room, you will have a great social commentary on the Seventies, very free-willing, sex and Abstract Expressionism at a high point.”

The main gallery, meanwhile, is to feature three walls called “XYZ” based on the books Mapplethorpe published between 1978 and 1981, though Marino is quick to explain that he didn’t use any photos that originally appeared in that series.

“People say: ‘Oh, you’re just showing the ‘XYZ.’ Not at all — these are Peter Marino’s curatorial choices of sex, flowers and nude men. All I borrowed from him is the headlines. The images have never been shown before.”

It was also time, he says, to revisit the series when homoerotic imagery no longer provokes the same reactions as when it first appeared. “They were so revolutionary — 98 percent of people who looked at them said: ‘OK, not only is this not art,’ but the silly U.S. government said it’s pornography. Really?” Marino asks. “I have a 25-year-old daughter and she’s like ‘Yeah, yeah, Dad, I know,’ and I go, ‘Were you a little bit shocked about the content,’ and [she’s] not. The kids with their computers, they are not shocked with any of these graphic scenes, it’s a very different time in which we look at them. It’s beautiful, well thought-out compositions, incredible balances of black, white and gray, real truth — Mapplethorpe was not afraid of showing the many sides of truth, and he wasn’t powder-coating things — that’s the basis of great art.”

Quoting curator Sam Wagstaff, who credited Mapplethorpe with “having pushed photography 100 percent into the realm of fine art,” Marino stresses that “for generations, people would say, ‘Well, it’s fine for advertising lipstick, it’s fine for taking mannequins to show dresses, but it’s not really fine art,’ and I believe that these photographs are really fine art.”

For Marino, curating the show is a way of getting closer to where he has always wanted to be — that is, art itself. “My grandfather was a butcher — that’s why I’m carrying this,” he says, pointing to a pair of silver cleavers slung around his neck. “My dad was the first to go to university and become an engineer, which was a big thing, and he wanted his son to be an engineer, too.

We were an Italian-Catholic family, they were afraid that I wouldn’t be able to earn a living and live a happy life [being an artist],” he says.

So his sister suggested architecture as a compromise. “It took me years to realize it was out of love, but at first you are just angry. It was like: ‘If you don’t go to university and study engineering, I’m not paying, so good luck being a waiter.’”

Interestingly, Marino notes, his massive bronze sculptures will likely outlive everything else he has done. “In 100 years, that’s what people will be looking at — the stores will be part of social history, but my bronze boxes, I kind of did them for eternity, and I hope they will be, because unless you melt them down at 2,000 degrees Fahrenheit, they are indestructible. We are now working on a big art museum exhibit of my art.”