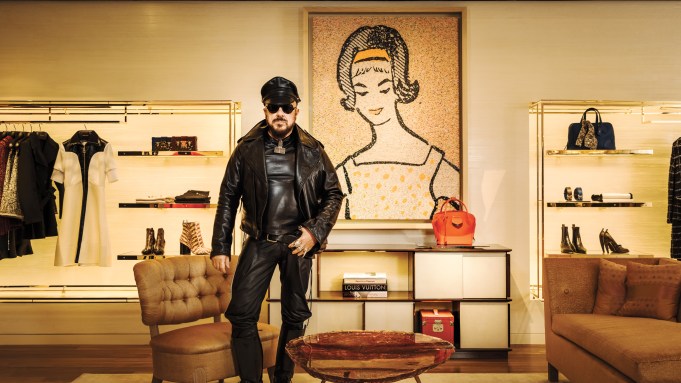 Louis Vuitton’s 57th Street flagship — the most successful store in the company’s U.S. fleet — is ready to reveal its new face.

Under the direction of Peter Marino, the architect who originally designed the 20,000-square-foot store in 2004, the boutique has undergone a top-to-bottom renovation — resulting in a brighter, fresher feel that’s been updated to reflect the times.

Michael Burke, chairman and chief executive officer of Louis Vuitton, underscored the importance of the U.S., which is the brand’s number-one market globally and home to 114 freestanding Vuitton boutiques. The 57th Street makeover “is not supposed to be a revolution, but time does fly by,” he said.

“We feel compelled to update it, it’s no different than any other great destination in New York,” said Burke, comparing the store to the Statue of Liberty and Grand Central Terminal. The flagship, at 1 East 57th Street, stayed open during the renovation, a method he prefers.

The store is the brand’s most important ready-to-wear door in the U.S., said Burke. Women’s products comprise two-thirds of the offering, while men’s makes up the remainder. Burke said he enjoys working with Marino, who designs all of Vuitton’s major stores and once described himself “as a brand psychiatrist.”

“He lays the brand on a couch and tries to understand the deeper meaning of the house and understand what makes it unique, and comes up with a design that sits with it and always pulls the brand forward,” the ceo said.

According to Marino, when the store was originally designed in 2004, it was one of the first to have a huge LED light fixture in the middle. “In 2004, LED was really innovative. We removed the LED light box, and put a more classic limestone facade inside, and what we’re going for is a wonderful art gallery feeling in between a fancy Gagosian uptown and one downtown,” he said.

“We just want lots of light and air and smooth surfaces so the product pops out,” added Marino, who also designs stores for the other LVMH Moët Hennessy Louis Vuitton brands Christian Dior, Fendi and Céline as well as for Chanel and Ermenegildo Zegna.

This time around, Marino chose spice colors to enliven Vuitton’s decor. “I’m totally into spices. You get these books about spices in India and you see hot pinks and turmerics. The carpets are actually quite bright, rusty orange, like a sprinkling of spices,” he said. Vuitton has this “incredible background” of exotic travel, added Marino, who said, “So I kind of did that in the bright colors in the artwork, such as a red flower. It’s everything you might find in a spice market in India or Morocco when you see all these colors.”

Just inside the entrance is a new and enlarged double-story vestibule that was redesigned in caramel lacquer panels and stone. A vitrine displaying a vintage LV trunk, as well as a brass chandelier by Vincenzo De Cotiis, adorn the entrance. A central staircase anchored by a feature wall connects the main store levels. The wall is done in marble with linear lighting accents. “We lightened the existing wood and the brass on the grand staircase,” said Marino.

While salespeople are equipped with iPads and iPhones, and there’s a custom floor-to-ceiling video screen showing the fall collection on the ground level, Marino has steered clear of any high-tech features. He said technology moves too fast to make it feasible. “By the time I spec it, and fill it and build the store, it’s a year later, and it’s already low-tech. Architecture is not an immediate profession. You do drawings, you do bids, you do budget approvals. Everything’s a year in advance minimum, and tech moves so fast. I think it’s gimmicky. If you buy a Vuitton product, the whole deal is it’s good forever. With the high-tech stuff, some of the brands are trying so hard to be hip with technology,” he said.

Probably the biggest challenge for Marino was that the store didn’t close during the renovation. “This was torture. We did it in four phases.

Burke declined to reveal the cost of the renovation, nor how much volume the flagship generates, but said, “It’s by far the most successful maison in Manhattan.”

The layout of the store has remained unchanged. The ground level features women’s leather goods, accessories, watches and fine jewelry; the mezzanine has men’s leather goods, travel, a personalization atelier and a new watch section; the second floor houses the men’s universe (which will open Nov. 21); the third floor is the women’s universe, and the fourth floor is the Haute Maroquinerie VIP salon and client services.

Marino has always felt strongly about having handbags on the ground level, since that is the number-one category at Vuitton. “I hate that old department store mentality, ‘let’s make them walk through everything, because they want the bags at the end.’ Life is too short, and none of us has any time, and if [more than 50 percent ] of the sales are handbags, I think I should present that,” he said.

As with other LVMH stores he has done, Marino commissioned artwork from several contemporary artists. Many works are feminine and fun, which is in line with the designs of Nicolas Ghesquière, creative director of the women’s collections. “It’s fun, spicy, modern and very up-to-date. There’s no retro art and no retro furniture,” Marino said. He described one painting, “Girl with Orange Lips,” by Farhad Moshiri on the women’s floor, as “hilarious, very tongue-in-cheek and very much the cool attitude of Vuitton’s women’s clothing.”

A focal point of the store is a significant red flower sculpture by Yayoi Kusama — “Flowers that Bloom Tomorrow, 2010” — which is displayed prominently under the ground floor staircase. Seven pieces of floral artwork by Todd Eberle adorn the walls of the store — five versions of “Untitled (Flowers for Richard)” are hung on the north wall.

Marino said passersby constantly stop to take pictures of the store, which he attributes to the “amazing” windows, created by Faye McLeod, visual image director at Vuitton, who recently published a book, “Louis Vuitton Windows” (Assouline).

Burke noted that business at the 57th Street store is evenly divided between locals and tourists, but overall in the U.S., 97 percent of the business is local. One reason is that it’s more convenient for European tourists visiting the U.S. to buy their Vuitton in Europe. The company is enjoying “a very good year in the U.S.,” and to date, the U.S. business “is up double digits,” he said. Marino will be renovating the SoHo store next year.

To mark the renovation, the 57th Street store will offer exclusive limited-edition products such as Monogram Hard Sided trunks with custom yellow “NYC Taxi Cab” lining ($8,250) and women’s “Masterpiece” half boots made with a yellow strap ($1,780). The store will also host the worldwide exclusive pre-launch of the women’s cruise 2015 Alma PM bag ($2,280) and Alma BB with Monogram Studs bag ($1,920).

In addition to the largest product offering of all the U.S. stores, the 57th Street unit offers bespoke and personalization services and made-to-order shoes and belts for men. Clients can design special order travel pieces, and have their items customized with hand-painted initials and motifs. There is also hot-stamping for selected items and small leather goods.

So far, Marino said he’s received positive feedback about the renovation, with many pointing to the Todd Eberle photos and femininity of the flowers. “People say, ‘Dude, how did you think of putting giant blown-up photos of flowers all around the leather goods? Everything is so boring at other stores.’ I say to people, ‘Thank you for your generous remarks, but I actually do think about these things. What would make women look up and smile and say, ‘This is just great.'”