Lapo Cianchi said the designers were invited because Pitti was “looking for a modern approach to feminine elegance." 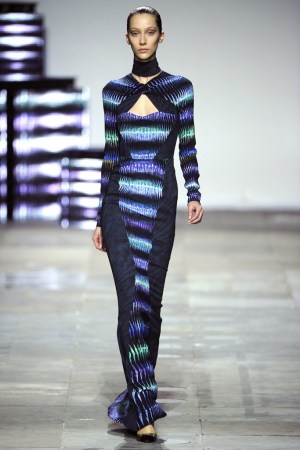 MILAN — Peter Pilotto will be Pitti W’s next guest designer.

The London-based fashion brand designed by Pilotto and Christopher De Vos will show at the 10th edition of Pitti W, to be held in Florence June 19 to 22.

Lapo Cianchi, director of communications and special events of organizer Pitti Immagine, said the designers were invited because Pitti was “looking for a modern approach to feminine elegance that is constant, profound and has the ability to think about itself.” Cianchi added that organizers “saw this in the evolution of their collections, a knowledgeable process that develops around surprising colors, body-conscious draping and light sculpting. It was also interesting to see how the designers’ two distinct spirits come together and reinterpret fashion’s classic elements.”

The designers are planning an event to showcase their pre-collection for spring-summer 2013.

Pilotto is half-Austrian, half-Italian, and De Vos is half-Belgian, half-Peruvian. They met while studying at Antwerp’s Royal Academy of Fine Arts in 2000 and launched the Peter Pilotto brand for spring 2008.

The designers, who have a penchant for the Sixties and Seventies in fashion, won the Best Emerging Talent Award at the British Fashion Awards in 2009. The brand is known for its inventive prints, signature knotting and draping and jersey dresses, as well as deft tailoring.