The line opened a permanent space in Hermès’ Left Bank boutique on the Rue de Sèvres. 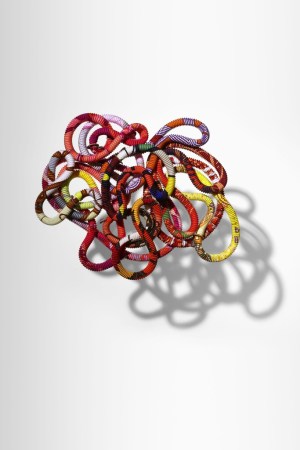 A modular system of wooden cleats and brackets inspired by the house’s well-known mosaic patterns greets visitors at the store’s entrance. Thought up by creative agency RDAI, they can be individually adjusted to hang up, put down or attach objects, depending on their form and function “because I never know what I am going to work with tomorrow,” Mussard explained, while giving WWD a private tour of the new premises.

Mussard, who represents the Hermès family’s sixth generation, said she always collected and amassed, explaining: “I had a hard time throwing things away as a child.” Now, she wanders daily through the house’s ateliers and picks up “whatever has fallen off the table.”

What she gets her hands on, “It can be a scrap of crocodile leather or a faulty silk carré,” will find a second life in a range of objects that blend the French house’s savoir-faire and an outside designer’s imagination.

Mussard does not like the word recycling. “I’m more at ease with the term up-cycling, or even re-creation and renaissance. Recycling often implies that it’s just fixed up, while Petit h follows the rules of art and innovation. And it’s really unique; there are not many maisons in the world that combine this number of artisans under one roof. My idea was to bring them all together, because they never communicate among each other, and to have them look at their craft differently from an outsider’s perspective.”

Thirty international artists participated in the creation of the current collection, which has 2,000 to 2,500 pieces. New objects will be regularly added.

From the silk dye colorist to the leather cutter, all skills are put to the test. “This project is a creative exchange,” explained Mussard, enthusing about the example of an ultralight necklace made from a damaged silk scarf. “The silk had a stain, so we cut it. Then Godefroy de Virieu, one of the artists we collaborated with, had the idea to turn it into a collier. He took it to our plisseur, who said it was impossible, that it would never work. But Godefroy insisted and together they found a way.”

The necklace was pressed on a ribbed rubber hose “like a French waffle” to achieve the pleated effect, and now ranks among the line’s bestsellers, priced at 145 euros, or $190 at current exchange.

The Petit h objects range from sculptural to functional. There is a chest of drawers thought up by French artist Christian Astuguevieille out of Rocabar, the house’s iconic textile, featuring handles that were taken from Hermès briefcases. Its price is 41,000 euros, or $53,883.

Broken pieces of the house’s precious porcelain plates served as image-makers for crocodile skin-clad kaleidoscopes, which go for 2,600 euros, or $3,416, and necklaces (780 euros, or $10,250); leftovers from the chevron leather maker’s table were transformed into postcards, which are priced at 80 euros, or $105, while some larger scraps of orange crocodile skin clad a cuckoo clock that whinnies every 30 minutes. “After all, we’re chez Hermès, and our roots are in equestrian,” said Mussard.

One of the most imposing pieces is a leather sculpture thought up by Dutch artist Marjolijn Mandersloot portraying a life-size couple of lionesses for 75,000 euros, or $98,566.

In addition to the new space, Petit h will continue to be sold via traveling sales, which will take place twice yearly, the house confirmed. The next one will be in Singapore in July, followed by London at the end of the year.